Sons of Asgard slot has a dynamic gameplay that unfolds on a reel set of four rows and five reels. These entail 1024 ways to win, but this isn't where the win receptacles stop, because the game can extend to more than 30,000 ways to win. Conversely, the payout potential, which is the game's maximum exposure, has been clocked at 20,000x on the winning bet. 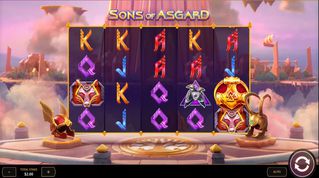 Witness the battle in the Sons of Asgard slot between Loki and Thor, and play for a chance to win up to 20,000x on the bet.

Those ancient gods always held a grudge against one another and we are used to seeing epic battles unfold in stories, movies and in recent times, online slots. The game at hand pits Loki against Thor who are bound to cause some desolation in the heavenly world of Valhalla, and potentially create windfall wins for the players down below.

Behind Sons of Asgard are Cayetano Gaming. They've made a number of slots that have been commended for their entertainment and payout values, but this game seems to have been given a lot more pep and attention to detail. It will be interesting to see how it fares in the sea of 'Asgard' and 'Viking' themed online slots.

The game design works around the setting of the epic battle between the gods that we can imagine unfolding as a real event, which unfolds in some parallel universe.

On both sides of the reel-set are the helmets that belong to one of the gods, while the symbols found on the paytable are relics and weapons that belong in the world of the Vikings.

Sons of Asgard slots offers the royal card symbols for the low-paying symbol category and there are extra symbols, such as the wild and the bonus/scatter.

It may be certain that players who appreciate science fiction and mythology will find this game quite likeable, and this fancy is before the gameplay features and payout potentials are taken into account, which our slots experts believe are close to impressive.

How to Play Sons of Asgard Slot

Cayetano Gaming have come up with a clean-cut design that places the controls and buttons in areas where they don't take anything away from the action on the screen.

The spin button in the shape of a big round button can be seen in the bottom right corner. The bet per spin can be selected from the opposite corner where you will find a minus and a plus button, along with the bet amount in the middle.

The bets in Sons of Asgard slot start at £0.25 for each spin and have a maximum of £50.00. The coin sizes are difficult to figure out and the game pays the symbol win amount multiplied by the winning bet.

Those who prefer to see the reel action unfold on its own can utilize the Auto button, which is there to configure the automatic spins. The players can choose from the button presets and add optional stops.

How to Win Sons of Asgard Slots

To win a cash prize from your spins the game needs to put up at least three symbols of the same kind, starting from the leftmost reel. These must fall on adjacent reels.

A wild symbol is there to substitute, so if you have one or two wilds, or more, these will work with the symbols that are best poise to connect into a winning outcome on the reels.

As it is the case with any other online slot, the optimum payouts in Sons of Asgard slots are made with five symbols.

The game has a theoretical return to player of 95.33% which falls just below the average. This decent RTP is met by a high variance, from which we can expect fewer small and medium wins and a chance for big wins that are spread across a bigger number of spins.

There are two bonus features in the game, each one named according to the god that presides over the affair.

A reel modifier can occur on non winning spins. In the event the symbols can nudge and fall into a place in order to for a win.

Thor's symbol appears on the third reel. When it stops on it five free spins are given in what is called Thor's Thunder bonus. The kicker that is part of the bonus are four wild symbols that are placed on random locations on the reels.

The other Sons of Asgard slot bonus feature is called Loki's Malice. Like the bonus of his opponent, Loki's symbol lands on the third and middle reel. It needs to stop in one place to trigger the bonus.

In the event the reels expand so that the initial 1024 ways to win can expand to some greater number, with a maximum of 32,768 ways to win.

Cayetano have not released the game as a free play demo yet but we expect it becoming available at the online casinos that host demos once its promotional period is over.

There is enough going on in the game that kept us interested. The features are solid but you don’t get too many initial spins. On the other hand there retriggering events are possible. The theoretical maximum payout from a single spin sounds promising for players who stay in the game for the long haul.

Claim a welcome offer from this page and discover Sons of Asgard slots at top rated online casinos.