Both reel-sets consist of three rows and five reels and between the two there are 40 always active paylines. The free spins feature removes the divide and has a 5x6 reel-set with 50 paylines. All this is on a medium variance with an RTP of 96.30% 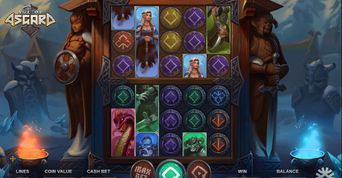 Witness the epic battle between good and evil and play for a chance to win up to 2444x on Age of Asgard slot.

Yggdrasil stay true to the name and their origins from Viking lands, with the release of the Age of Asgard slot. The game pits good against evil and takes the players through the nine mythological worlds which can deliver a maximum exposure of 2444x multiplied by the winning bet.

Players with a thing about mythology and Vikings will find Age of Asgard appealing for the design. The reel-set is split in two parts - the upper part churns out symbols of benign women warriors and the bottom part is inhabited by brutish ghouls and monsters.

Besides being able to deliver fierce reel action the game also offers quite a number of extras, such as expanding wilds, super wilds, random prizes and more.

We couldn't expect anything less from Yggdrasil but a stellar slot design that does justice to the theme. The entire game is about the eternal divide.

On both sides of the reel-set are burning fires, one red and the other blue. Besides this and the snow, much else isn't moving around. The picture symbols are stills, however each winning outcome is treated by lightning strikes and pulsating electricity.

Age of Asgard slots has been treated to a musical theme that instills the gameplay with an atmosphere of epic battle.

How to Play Age of Asgard Slot

To set up the terrain for the epic clash you need to select a sum from the Coin Value window. The amount selected there will reflect in the Cash Bet window and display the whole bet.

Each bet spins across all paylines. The smallest bet is £0.20 per spin and this reflects Yggdrasil's adopted minimum of the very low payline bet of £0.005.

On the other end of the betting spectrum is a coin value of £5.00 per line, which reflects the most expensive bet of £200.00 per spin.

Once you've selected the bet, pressing the Spin button will send the reels spinning for that amount. This button is placed centrally in the bottom, just below the third reel.

Players who prefer to enjoy the show while the reels spin on their own can opt for the autoplay option. Press the button to the right of Spin and select from the number presets on the list.

How to Win Age of Asgard Slot

Winning outcomes are made with three or more matching symbol falling from the leftmost reel and on to the right. Both reel-sets can reflect winning outcomes whenever they occur.

Age of Asgard slot has more than one wild symbol. There are two expanded wilds for each of the two worlds, and there is a standard, one grid-square wild symbols that are awarded at random during the clash feature.

The picture symbols are high paying and of these the most valuable are the lady with the gjallarhorn on the one side and the dragon on the opposing side. Both of these pay 6x on the winning bet when five of the  same fall on the reels.

The dagger-wielding girl and the sword-wielding demon bring 5x on the winning bet and the blue demon and the blue girl pay 4.5x. All other symbols represent the card suits are pay between 1x and 2x on the bet for five of the same.

The clash feature is triggered when the symbol appears on the same reel on both reel-sets. In the event up to four single random wilds will find their place on the reels. If they fall on high-paying symbols the remainder of that expanded symbol will be covered by the golden wilds.

Two Age of Asgard free spins modes are determined by two different bonus spins symbols. Three of the same symbols on either one of the reel-sets will trigger the bonus game on a reel-set of 5x6.

Then a Super Wild symbol takes up all six rows of a single reel and comes with a chance of Nudge another wild and cause a Clash and a single respin.

The Ragnarok symbol landing in six positions awards 20 free spins that play on the expanded reel-set of 5x6. In the event only high-paying symbols are present and the Super Wilds always nudge, clash and reward respins.

Players can get a taste of the action thanks to Yggdrasil who release even their best games as free play demos. This and other of their titles can be found at online casinos reviewed at SlotsWise that host demo games.

The thing about Yggdrasil games is that the very low bets have coin sizes of less than a penny, while even the top symbol payouts give no more than 6x.

It’s sensible that the players shouldn’t expect any payouts that matter, unless the game triggers the extras which then can turn up some decent wins. The theoretical maximum prize is well above 2000x so it is possible to reach big amounts even with small bets.

Claim a welcome offer from this page and discover Age of Asgard slots at top rated online casinos.