Discover the adventure-themed Mystery of Eldorado slot by Endorphina. This is a game on ten selectable paylines that plays on three rows and five reels. There are some amazing symbol wins on this game, with the biggest one at £50,000 with the biggest bet of £100.00. The game has a free spins bonus with the wild-scatter bonus which replaces any single symbol. The ten free spins can get you a special symbol that comes in expanded on the reels. 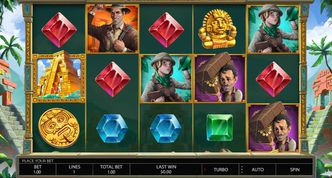 Play the Mystery of Eldorado slots for a chance to win the game’s top prize of 50,000 plus many other hefty prizes.

Climbing the stepped pyramids is a dream of many natural-born adventurers. Although there is a rule against that, you can always visit the Mystery of Eldorado slot for a chance to land winnings with the gold pyramid and the rest of the game's high-valued symbols.

This is a game developed by the slots experts Endorphina. The reel action unfolds on three rows and five reels. There are ten always-active paylines that deliver the winning outcomes from left to right on one or more of the paylines.

Mystery of Eldorado slots has a bonus feature that is triggered by the map scatter symbol. There are ten free spins with the bonus and a special expanding symbol. The setup for the game is very dynamic, as it allows the player to choose the number of active paylines, the credits and the bet levels.

Endorphina have several dozen games under their belt and some of these are pretty good. This game is an example of those that are set in the middle, in terms of how much the company has invested of their time and energy in producing the game.

Mystery of Eldorado slot features picture symbols and gems, none of which are animate. So you'd have to see a winning outcome for the portrait symbols to light up and for the diamonds and gems symbols to spring to life.

So in that regard, it is a careful balance between simplicity and dynamics, which results in a slot that is quite playable by anyone's standard.

How to Play Mystery of Eldorado Slot

Endorphina have allowed total control over the bet amounts, so the players can select the number of active paylines between one and ten. This and the functionality of setting up the coin size in the upper left corner and the bet levels in the bottom left corner can produce the bet amount that is preferable.

The smallest bet that can be spent per spin is one penny. The most expensive bet comes by way of setting the coin size to £1.00 and the bet size to ten. On a single payline the cost of the total bet is £10.00 and the cost of the bet on all ten paylines is £100.00.

To set the reels spinning hit the Spin button and if you want to kick back and let the adventure unfold on its own, select the Auto button. This turns the automatic spins on, but doesn't provide options to set up a total loss or a single win limit.

The Turbo button toggled on simply causes the reels to turn and stop much faster than when it isn't on.

How to Win Mystery of Eldorado Slots

The game delivers payouts when three or more matching symbols fall on a payline from left to right. The game can deliver more than one win outcome per spin.

As for the symbol wins, these can be seen in the paytable, which can be accessed from the menu button in the upper right corner of the screen.

The paytable is dynamic, which means the symbol pays will shift according to the selected bet. For the fun of it, we'll check out the symbol wins with the highest bet of £100.00.

For five matching pyramids on a payline the Mystery of Eldorado slot delivers the jackpot prize of £50,000. Next in terms of value is the Indiana Jones look-equivalent, whose portrait symbol pays £20,000 for a five in row. The adventurer girl and the helper both pay £7500 in the best outcome of five of the same.

The game has one bonus feature and it is triggered by the scatter symbol, which is represented by the slot's title and is a map. This symbol is also the wild, which means, it substitutes for any, including the golden pyramid.

When three or more of these symbols fall on a payline, the result is ten free spins, plus a special expanding symbol.

Before the game starts a random symbol will be selected and given the expanding capacity. When there are enough of that symbol to cause a win, each one will expand across each of the reels.

An additional game can be played following any winning outcome during the base game. This is the Risk Game which is basically guessing the higher card. With each winning outcome the prize doubles. The player can flip a joker, but the game can't, and the joker beats any other card in the deck.

Mystery of Eldorado slot can deliver both fun and sizeable winnings, if you choose to play with higher amounts. The game doesn’t have any multipliers or reel modifiers, except the special expanded symbol which only appears in the free spins bonus. The top payout of 50,000 is with a triggering bet of 100.00 however, the pyramid symbol is a very, very rare sight on the reels. Still, the other picture symbols pay serious amounts too.

Claim a welcome offer to start your adventure on the Mystery of Eldorado slots. Start right from this page to play at either one of the top UK online casinos.

El Dorado The City Of Gold