Asgadrians slot takes place on three rows and five reels that spin across 25 paylines. All of the standard niceties that can be found on a modern online slot are there: a wild symbol, and separate symbols that are scattered and bonus, each triggering a respective feature. 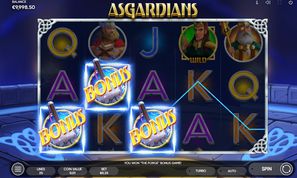 Endorphina have ventured out to the magical world of Asgard to investigate the affairs of a legendary dynasty called The Asgardians. Their online slot puts fierce gods such as Odin, Thor, Freya and Loki in a game that has a free spins feature where all wins receive a 3x multiplier treatment.

Yet another feature that can be found in Asgardians slot is the gamble feature that lets the players take their winnings from the base game and gamble them in a guessing game, which is greater or smaller type of a game where the player can get the all-defeating joker but the dealer can not.

At any rate, this looks like a sweet simple game, even though it has to do with a dramatic theme such as Asgard, so let's climber higher up Valhalla.

The slots designers at Endorphina have given this royal family the best treatment when it comes to the graphic design. Each picture symbol portraying one of the gods is a 3D rendition that tells a human story. These are the high-paying symbols of the game, while the low-paying consist of the royal cards.

Asgardians slots comes filled with video effects and eye candy. Win outcomes cause the gods to come to life and to be wrapped around by an electric force. The bonus features too are announced with a thunderous effect which is the right way to do it, because they can result in thunderous outcomes.

The beggining of each bonus is announced by a dramatic orchestral piece, but there are other tracks throughout the game that set the mood for the mythological theme.

How to Play Asgardians Slot

The game can begin with the push of the Spin button, which is to be found in the bottom right corner of the screen. There are two buttons on the left: auto and turbo. The first opens up the autoplay menu and the second toggles on the fast spins option.

Asgardians slot has selectable paylines, which rare for slots nowadays, but is completely in character when it comes to other Endorphina productions. This means the game can play with only one payline for those who want to play that way.

In terms of the bets, the game offers coin sizes between one penny and £1.00 per payline, so when playing with all 25 lines on, the smallest bet is 25p and the biggest bet is £25.00 per spin. Pressing the bet button again raises the maximum stake higher up to £250.00

Of course, any other combination between paylines and bets can be selected.

Asgardians can be enjoyed in autoplay mode, which lets the players relax while the gmae does the spins on its own. You can either press Auto to get the reels spinning right away, or go through the menu for additional options, such as number of spins, balance decrease, balance decrease and so on.

How to Win Asgardians Slots

Wins in the base game prompt the players to either cash-in or gamble. The cash button is in the place of the Spin button. You need to press it to get the wins to your balane and then press Spin again for the next round.

If you want to try your luck in the gamble game press the red button in the opposite corner. This takes you to a table where you can pick one of four cards. If it trumps the one that's showing, you've just doubled your wins.

In terms of the payouts, the most lucrative symbol in Asgardians slot is the wild symbol, portrayed by Loki and paying 300x multiplied by the bet. Odin's symbol pays 20x, Thor's pays 10x and Freya 10x also. Each of these outcomes are for five matching symbols.

The bonuses are quite simple to explain. Three hammer symbols trigger the pick-me bonus, where you have to break the shields by pressing on each one. There is a cash amount behind all but one, two or three shields. If you hit the blanks, the game is over.

The scatter symbol triggers the free spins bonus when three or more land on the reel-set. During the free spins feature, all wins are given a multiplier of 3x and also, the hammer symbols can trigger The Forge bonus.

Endorphina has made the game available as a free play demo, which enables the players to try it with free credits and get a feel for how it plays.

The game is rather simple, offers two features and the picture symbols can pay decent amounts even with three symbols. The maximum theoretical payout is above 3500x.

Discover Asgardians slots by claiming a welcome offer right from this page and play at top rated online casinos.

Age of the Gods Norse King of Asgard