Dive underwater and check out some of the marine life in the Atlantic Wilds slot. This is a game of five reels and paylines that can range between 10 and 30, depending on your choice. With top symbol payout of 33.33x on the winning bet and a free spins bonus feature, this is a slot that can turn up some decent wins. 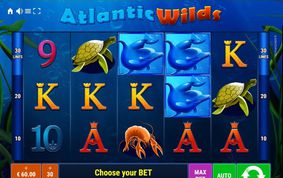 Play the Atlantic Wilds slot for a chance to win some neat cash prizes. Play on three bet levels with 10, 20 or 30 paylines.

The slots experts at Gamomat didn't need to throw pots and whistles on to the Atlantic Wilds slot in order to make it popular. While the graphics are as basic as a basement, the game gets its high marks because of the potential for high winning outcomes.

Atlantic Wilds comes with a total of 30 paylines which can be lowered to 20 and 10. It comes with a number of high-paying symbols, of which the most lucrative pays 33.33x multiplied by the winning bet. The wins are paid for three or more symbols falling from left to right on one or more of the game's paylines.

Those players who are familiar with Gamomat slots aren't going to be taken aback by the lack of animated bits in the game, but rest assured, reel action there shall be.

Atlantic Wilds slot comes with a wild symbol that substitutes for all except the scatter, and that symbol brings on the bonus feature.

The theme of this game is undersea marine life, so naturally, the picture symbols are represented by some specimens such as a shark, a tortoise, an octopus, a crustacean and so on.

Like we said, Gamomat's slots are lackluster so they don't even pretend to throw in amazing features. The focus is on the potential wins and a slots adventure can take place without much fanfare indeed.

There is a light musical jingle that is almost a solid piano tune that plays when you press the Spin button, but it doesn't really set the mood as it is basic. Still, don't let this sway you away from Atlantic Wilds slot.

How to Play Atlantic Wilds Slot

To set the game for the reel action you only need to select the size of the Total Bet and the number of Paylines. The game starts with the default number of 30 but this number can be lowered to 20 or 10 paylines.

To spin the reels press the 'recycle' button, which is located in the bottom right corner of the screen. This sets the reels going once, but if you select the Autoplay function you can select from the number presets with automatic spins.

What is more, the Atlantic Wilds slot lets you set some additional options, such as, to set a single win limit or a total loss limit for the autoplay function.

How to Win Atlantic WIlds Slots

The game offers a number of high paying symbols that are represented by one of the game’s marine animals. The most lucrative symbol is the dolphin which pays 33.33x multiplied by the bet. If you get five of these symbols on a line with a bet of 60.00 then the top payout is 2000.00.

The dolphin is the wild symbol and it substitutes for all except the Atlantic Wilds slots Bonus symbol.

The other symbols pay prizes that are equally rewarding. When triggered by the biggest bet a five-symbol payout with the octopus symbol brings £800.00 and the same is valid for the shark.

The tortoise and the crustacean pay £500 when five of the same are on a line triggered by the top bet of £60.00.

During the Atlantic Wilds slots bonus, the number of wild symbols is more frequent, hence the title of this slot game.

The players may be able to enjoy this Gamomat release as a demo because the company has been known for releasing its online slots as demos. Some online casinos host demo games that are available to registered players.

If you are about just trying Atlantic Wilds out then why not play with the smallest bet and enjoy the thrill of making any potential wins for yourself?

The game isn’t much and much isn’t expected from this maker, but this is only true as far as the graphics design is concerned. Other than this, the game offers a full adventure on the reels and some nifty payouts, so don’t mind the theme, because the five symbol wins can be made with more than a single wild and ring in a payout. This is more true in the Atlantic Wilds bonus feature.

Claim a welcome offer to play Atlantic Wilds slot at some of the best online casinos based in the UK.