Maidens Of The Sea Slot

Discover what prizes may be hidden on the sea bottom when you play the Maidens of the Sea slot by Endemol. This 40 payline slot has four rows and five reels that can deliver a top payout of 200,000x. The game also has two reel modifiers that can replace symbols and create wilds on the reels, as well as a free spins bonus. The theoretical RTP is 96.30%. 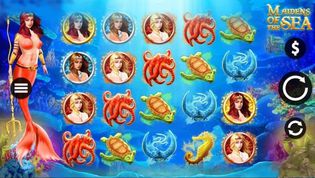 Maidens Of The Sea Slot Online

Explore the sea bottom to find the siren’s dwelling on the Maidens of the Sea slot, where the top prize is 200,000x.

Maidens of the Sea Introduction

Sirens are real and they exist in their underwater queendom in the Maidens of the Sea slot. The game comes with three features that can boost the potential winnings or deliver a free spins bonus. The slots experts at the Endemol company who are behind this game, have made a reel-set of five reels and four rows that spin across 40 always active paylines.

Maidens of the Sea slots is a multiway slot that makes the winning outcomes from left to right on one or more of the 40 paylines. The symbol wins begin with three matching symbols, or more, with the highest payouts being made with five of the same symbols. The wild symbol is there to substitute for any of these symbols, except for the bonus symbols.

The game can deliver a fun adventure on the reels, and if your objective is to reel-in a big fish then there is the possibility if you get to see either of the three sirens landing on the reels in five matching instances.

Find out further detail about how to play the slot and where to claim a welcome offer for some of the best online casinos in the UK.

Maidens of the Sea Design

The game design is superb for a medium-tier slot like this one. We couldn't find any serious flaws, so for our expectations the game fulfills the conditions to a gaming experience.

The theme is the ocean, that is, the ocean bottom, where a number of sirens frolick among the seahorses, crabs, turtles, octopuses and so on. There is a cheerful musical theme with the gameplay which states that the developers have made an earnest attempt to deliver an entertaining slot.

How to Play Maidens of the Sea Slot

Set up for the gameplay by selecting the dollar sign on the right hand side of the reels. This will open up the choices for the wager, that is, for the amount that you'll be betting with each spin.

The smallest wager on Maidens of the Sea slots starts at £0.40 and the most expensive bet is £400.00 per spin. In other words, the smallest wager has a penny per payline and the top bet has a line bet of £10.00. These amounts are the multipliers on the winning payline.

To set the reels spinning hit the big round spin button to the right of the reel-set. The button below it is autoplay and that lets you choose from the automatic spins presets, but there is also the option to set a single win and/or a total loss limit.

Maidens of the Sea Symbols

The game has a set of high symbols and a set of low valued symbols. Various symbols from both sets fall on the reels at the same time. In the first category are the game's three maidens: a redhead, a brunette and a blond siren.

The other category consists of the octopus, turtle, crab, seahorse and jellyfish. These symbols pay between 200x to 100x respectively when five of the same land on a payline.

Maidens of the Sea slot also has a wild symbol that is represented by a golden starfish. This symbol also pays for three, four or five of the same, with the top instance bringing 500x.

How to Win Maidens of the Sea Slots

The most valuable symbols of the game are those in the high paying category. Of these the most lucrative symbol pays x500 and is followed by x400 and x300 multiplied by the line bet when five of the same land on a payline.

Say you are betting £4 per spin, which is £0.10 per payline. In the best symbol outcome you can get £50.00. More than one payline win can occur on this slot, as it has a total of 40. That means a single spin has the potential to get you more cash prizes.

The biggest increase in your chances for a big win is in the Maidens of the Sea free spins bonus, where you get free spins and some boosters.

Maidens of the Sea Bonus Features

The game has a free spins bonus that is triggered when the bonus symbol lands on the first and fifth reels. That symbol is represented by a treasure chest with the word BONUS across. This will invite a second screen where the player gets to pick a mermaid which in turn will grant between five and 20 free spins. In the third step the players get to choose a treasure chest that throws in a multiplier on the free spins between x2 and x5.

Besides that, the game has two reel modifiers besides the free spins bonus. The Wild Rush has the sires swim to the reels and conjuring a reel of five wilds. The Siren's Switch causes the sirens to change a random symbol with one of their own.

Maidens of the Sea Closing Thoughts

Endemol is a famous company with dozens of online and land casino slots. They have also dozens of television shows behind them. No surprise, the game is quite entertaining and one of the best with a sea or ocean theme. With a potential payout of 200,000x on the line bet it is expected that Maidens of the Sea will remain on the slots rosters of many online casinos.

Start your adventure by claiming a welcome offer for either one of the best online casinos in the UK, right from this page.