You are welcome to join the gods on the reel set of this exciting game by Golden Rock Studios. A game of three reels, five rows and 10 paylines can trigger expanding wilds, respins and has two top paying symbols of 10x and 30x that can be substituted by the wild. The theoretical RTP is 95.94% and the volatility medium to high. 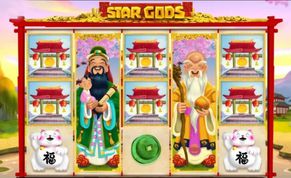 Play with the gods of fortune on a game called Star Gods slot. Score bonus spins, respins and expanding wilds.

Get teleported to the imperial palaces of the Han empire and feel the presence of the three fortune gods: Fu, Lu and Shou. The Star Gods slot lets you take a peek into the lives of a glorious emperor and his life which is surrounded by coins made of precious metals.

Star Gods offers the standard reel-set of three rows and five reels. These spin across 10 paylines that are always active and spin all the same for any bet amount that you select. Wins are made with three symbols of the same kind falling on one or more of the paylines, starting left to right.

Besides the standard high and low paying symbol category and base game wins, this online slot offers a free spins bonus feature and the three gods of fortune, which can expand on the reels, respins and additional respins.

All of this combines for a reel adventure that can create big wins and decent wins in the base game.

The Golden Rock Studios is a new company comprised of people who have many years of combined experience in the field. The game brings more than just the bare minimum for an online slot that is engaging and able to hold the players' attention.

The theme of Star Gods slots is obviously, the China of old, and that the look and feel capture that mood too. The central figures are the gods of fortune which we had named above. Each of these deities appear on the reels as jolly, kind-hearted human beings.

Much of the events on the reels are animated, and that is an attribute which shows especially on the big wins.

How to Play Star Gods Slot

The game can begin with the push of the turqouise spin button, which is located in the bottom right corner of the screen. But before you do that from the get-go you may want to check out what the default bet is.

To change the bet press or click on the up or down arrows in the bottom left corner of the screen. BEts in this game start at £0.10 per spin, which is one penny per payline, and end with the maximum line bet of £20.00, which reflects on the total bet as £200.00 per spin.

Star Gods slot has all of the non-gameplay related settings in the cog button. To configure the game in autoplay mode select the circular arrows button which can be seen to the left of the Spin button.

Besides choosing from the number of automatic spins from the presets, you can also add optional stops. The autoplay mode is the only way to let the game spin the reels on its own without any of your input, which is another, more casual way to play online slots.

How to Win Star Gods Slots

The players win cash prizes every time when three or more symbols of a same kind fall on one of the paylines. There can be more than a single payline win resulting from a single spin, and let's not forget the respins and the stacked wild symbols that are, quite auspiciously, the three gods of fortune in ancient China.

The game has few lucrative symbols. The pagoda pays the most lucrative amounts, with 30x on the winning bet when five of these symbols top on a payline. The cat symbol pays 10x on the bet and the red envelope pays 6x. These are the high-paying symbols.

The wild, which is represented by the gold star, is a substitute and can replace any of the Star Gods slot symbols we mentioned above. The rest of the paytable consists of the four sycee coins - patinated gold, gold, silver and bronze.

We can count the star wild symbol as part of the game's extras because besides substituting it can expand in the form of the gods of fortune.

Whenever a wild stops on any of the middle three reels the corresponding fortune god will expand and grant respins until there is a win or until another wild or scatter symbol appears. Additional wilds on these reels add a respin to the rounds.

When one, two or three expanded wild symbols are met by one scatter symbol Star Gods slots triggers the bonus feature which is two win spins and these can be retriggered.

Golden Rock Studios have not released the game as a demo as of yet. Those who are eager to try it can do so with only ten pennies per spin. Online casinos that host games in demo mode may have it as a demo.

The slots experts have included the rollercoaster feature which can shift the game’s volatility, however the default has been set medium and slightly towards the high. We can’t know of the maximum theoretical payout but successive respins may lead to more than 4000x on the winning bet.