Venture into the different corners of the world and spin to win alongside some of the majestic big cats. The Cats slot made by IGT has five reels, 30 paylines and offers lots of fun and reel action. 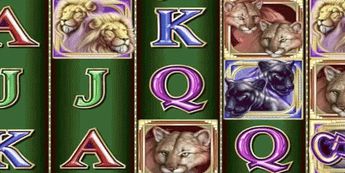 Venture into the different corners of the world and spin to win alongside some of the majestic big cats. The Cats slot made by IGT has five reels, 30 paylines and offers lots of fun and reel action.

Take in the bright colors of the spectacular background as well as the superbly drawn big cats that make up the reel symbols. Land the high winning combinations of some of Earth’s fiercest and most beautiful animals. 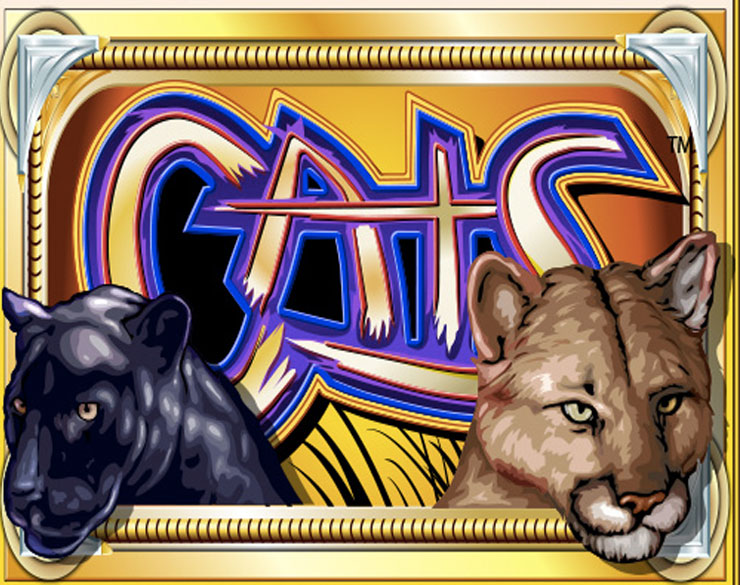 The Cats slots from IGT is definitely a bold venture into the animal world, and hits the players' spot on many levels in terms of its theme and design. The background behind the reels is filled by a wild landscape at sunset. The reeds and trees will instantly take you to the African savannah, home to some of the world’s biggest cats.

You can delve right into the heart of the wild with IGT’s Cats slot game, landing various combinations of on-theme symbols to receive a winning cash payout.

Typical playing card symbols make up those of lower value on the Cats slot game. While they might not be on-theme or designed as such, they do come in bold colors and we suppose they need to in order to stand out when sharing the reels with such fantastic animal illustrations.

Cats’ higher value symbols are of course represented by various cats. Players can land a jaguar, a lion, a tiger, a leopard and even a mountain lion. The Cats slotsgame logo is the wild, substituting for all others, except the paw print scatter, to help make winning combinations.

Plus, all of the reel symbols, except the Cats logo wild, have the potential to appear as Split Symbols, but we’ll explain more on that later. Overall, in terms of design, the Cats slots game appears majestic and all the online casino players would know when they get a feel of the game that this is a genuine gambling experience.

Before you spin to win on theCats slotgame, you’ll need to select your stake for each play. Firstly, you can decide on your coin size by using the + and - buttons beneath ‘Line Bet’.

Once this is done, you can then use the same buttons but below ‘Lines’ to select the number of paylines that you’d like to activate. With 30 paylines available, you can choose to activate any amount of these between one and all 30.

Your total stake per spin will be your coin size multiplied by the number of active paylines. We’d recommend activating as many paylines as possible, within your budget, so that there are more ways for you to land winning combinations.

You can then begin playing on the Cats slot by clicking the central ‘Spin’ button, setting the reels off one at a time.

The cat symbols pay out more in the game, with the panther specifically paying out the most. Plus, with the Cats slot game’s special Split Symbols, you have the opportunity to land combinations of an impressive 10 symbols! Equally, if you land 5 split symbols across an active payline, you’ll receive the equivalent of a 10 symbol payout.

Split Symbols look like the usual cat symbols but with two of them on it. If the symbol has two cats on it, that means it’s the equivalent of landing two symbols. So, if a panther Split Symbol lands on reel one, next to single panther symbols on reels two and three on an active payline, then the payout will be equivalent to a four symbol payout.

The Cats slot’s logo, which acts as the wild symbol, can also help create wins, substituting in for all others except the paw print scatter. Plus, the wild symbol can also pay out cash sums if combinations of itself land. However, the Cats wild doesn’t have a Split Symbol equivalent.

Cats Slot Game has a free spins round which is triggered by landing five or six paw print scatter symbols on reels two, three and four. Landing six paw scatter symbols requires at least one of the symbols to be a Split Symbol.

Landing four paw print scatters won’t trigger the free spins round, although it will multiply the total payout x2. This is a hefty bonus given to the player, and counts for a lot especially if you are playing at a higher stake than what is the basic.

During the free spins round, additional free spins cannot be triggered and the round will end once all of the free spins are used up or when the top award limit is reached. Of course we hope that the players' luck would be more inclined towards the second outcome rather than the first one.

Differentiating one slot from all the rest isn't easy, but Cats' approach is to have the possibility of Split Symbols. These carry not one but two symbols and can work in conjunction with other symbols in order to create some truly bumper payouts.

The Cats wild symbol, for instance, will score double when it substitutes for a single cat. As the name of the slot suggests, jungle cats are the big theme here and the stunningly illustrated symbols make this a feast for animal lovers - the Split Symbols only add to the allure, with the grid sometimes containing a vast crowd of these majestic beasts. However, it's the split tiles combined with the regular big wins that make this a king amongst lesser slots.

Overall, the Cats slot is a stunning looking digital slot with many excellent illustrations and smooth gameplay. Plus, the free spins round doesn’t hurt! We think that it could potentially have a few more bonus features to complement the Split Symbols, but this is maybe a small issue for an otherwise great slot game.