This rendition of Aztec Gold comes with six reels, rows that can shift between two and seven and a maximum 117,649 ways to win. Players can spin the reels with as little as 20p per spin and expect the game's logic to behave within a high-volatility math model. Players who play Aztec Gold: Extra Gold Megaways will find a theoretical return to player (RTP) of 96.00% and a maximum win potential of 20,000x multiplied by your bet. 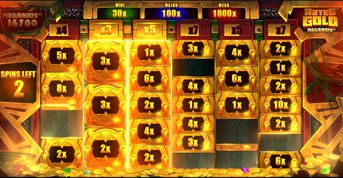 The saga of gold and the Aztec civilization continues, but not far from where it stopped the previous time. The Aztec Gold Megaways slot gets a remake and the result is, well, the same. Everything about the game remains - the graphics, the gameplay, the features, the symbols and even the three jackpots - the Mini, Major and Mega.

So what gives iSoftBet the right to call the Aztec Gold: Extra Gold Megaways slot a new online slot in 2020? The answer is: overhauled math model. This means that players will find a game that looks the same but has a different rhythm to it, and that's not such a bad prospect to consider.

When it comes to the gameplay details, iSoftBet has taken good care to continue the game's ability to create an exciting momentum with the cascading wins payout system. As the winning outcomes are removed from the reel set and new symbols are added, players can get multiple wins from the same bet.

What is more, Aztec Gold: Extra Gold Megaways comes with the Sun Disc reel modifier and with a mystery symbol that can improve the odds at landing a bigger win. Last but not least, a Hold and Win jackpot game is the way to cash winnings and potentially one of the jackpot prizes.

The graphic design doesn't differ from its predecessor's but there are few slight differences that have to do with the choice of colors and improved animated details. This is one of the few games that has made us chuckle at the choice of sound effects and we mean this in a positive way. For example, when you land a winning outcome with the eagle symbol you will hear the animal's screech and when the snakes land a winning outcome, you can hear a hissing sound.

The above is just one example of how well-made is Aztec Gold: Extra Gold Megaways slots. The entire reel adventure is filled with moving parts, exciting visual effects, the radiating glow of gold during the Hold and Win or Cash and Spin if you will, bonus feature, and so on. Those who play Aztec Gold: Extra Gold Megaways should definitely consider having the sound on, as the musical score is nothing short of astounding.

The design around the game controls and buttons is different between this and the previous game. In the current game the buttons are on the right-hand side of the screen while the original megaways slot has all of the buttons at the bottom of the screen. Nevertheless, players will find either layout conducive to intuitive gaming.

The spin button is on the right and above it is the autoplay button which enables players to enjoy Aztec Gold: Extra Gold Megaways slot hands free. The game comes with a number of automatic spins presets and a set of optional settings that can help lay some limits to the spending.

Before making a bet, players need to select an amount for the wager. Pressing the poker chip button at the bottom of the screen opens up a list of bets that range between 20p per spin and 20.00 per spin. These choices are basically double the minimum/maximum of £0.10/£10 compared to the other game.

Landing winning outcomes requires three or more matching symbols across the six reels, however, the combination of symbols and wilds has to begin on the leftmost reel. The game's wild symbol is represented by the W letter, which can substitute for any of the standard paying symbols, including the most valuable symbol of the Aztec Gold: Extra Gold Megaways slot - the emperor which is worth 50x for six of a kind. The same symbol pays between 2x and 25x for two, three, four and five of a kind.

The remaining high-paying symbols can pay ranging from below the amount of the bet for three of a kind. The payouts range between 0.2x and 5x your bet.

All symbol payouts except that of the emperor's seem low-ish which is expected for Megaways slots, but the sun discs are there to improve the outlook of the final tally, if the player is lucky to land the winning combination that starts the jackpot Hold and Win bonus.

Besides the option of buying the Cash Respins feature, players can also win it organically by landing five disc symbols. This starts the player with three respins which reset back to that number for every disc that lands on the reels. In the event, the respins game can cover the entire reel set with discs and award the 1000x Mega jackpot. The Mini and Major pots can arrive on any one of the reels and dics that land.

A feature that makes Aztec Gold: Extra Gold Megaways different from other games is that each reel is topped by a multiplied that is activated and multiplies the values on the disc symbols when the respective reel has been filled with the bonus symbol. This is one way to land big wins during the bonus.

Two other extra features are available and can trigger on any spin. The Mystery Symbol can land in multiple locations and reveal that many symbols of the same kind at once. The Sun Disc Booster adds few or several bonus disc symbols to help trigger the bonus feature.

Players can enjoy the game or simply test it with free credits when playing the free play demo slot. The demo can be found at online casinos that host iSoftBet slots and particularly this game in practice play mode.

Compared side by side, the two games look alike but there are few small differences. Essentially, you can play either one and still get the same kick out of the experience, by way of graphic design, music and potential payouts. Overall, this is a great slots series, but it might be the end of it with this release.

Claim a welcome offer to discover the adventure of Aztec Gold: Extra Gold Megaways slots. Start on this page and enjoy the game.

Cat Wilde and the Eclipse of the Sun God