Gold Pile: Toltec Treasure comes with three jackpots that can trigger in the base game and in the bonus feature. The Grand Jackpot pays 4000x your bet, which makes this game a rare Hold and Win jackpot bonus slot with such a great instant payout. The layout consists of three rows and five reels and these spin across 25 paylines. The theoretical return to player (RTP) of Gold Pile: Toltec Treasure is above the average. 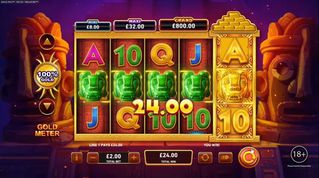 The ancient spirits of Mexico are celebrated in this Rarestone Gaming production that was released by Playtech at the end of 2020. Never mind the date, because Gold Pile: Toltec Treasure slot appears to be timeless, not only because of its exciting gameplay and four jackpots. The game has a grand prize of 4000x the bet and that makes it stand apart from other releases by the same company, such as the Hold and Win jackpot game Amazing Factory slot.

The game has been furnished with a standard layout of three rows and five reels that spin across 25 paylines. The range of bets is welcoming for both casual slot players and pros and any given spin can trigger a set of features, both in the base game and as a bonus.

Part of these bonus events are the instant jackpot prizes. The Mini jackpot and pay 40x and the Maxi jackpot 160x your bet, however, it is the Grand Jackpot that ought to have many slot players interested in the game.

In terms of graphic design, Gold Pile: Toltec Treasure slot does justice to the theme because central to the design are artifacts that belong to that culture, as well as the fascinating stone heads that have been discovered in more than one location in Mexico.

Winning outcomes are celebrated with animated details that make all of the golden artifacts to gleam on the surface while the reels are alight in electric current. Cool stuff on the reels, nevertheless, and this is enriched additionally by a thrilling soundtrack.

There are three special symbols that are part of the gameplay. The wild acts as a standard substitute symbol - it can stain in place of any other except the scatter and the gold symbols.

The scatter symbol triggers the Gold Pile: Toltec Treasure slots free spins bonus with three on the playing field. The game rewards eight initial spins, however, there are four and eight extra spins to be had with the help of two and three scatter symbols on the reel set.

The jackpot bonus game can trigger with the help of the gold symbols. Any symbol in the high-paying has its golden mirror-image and when five of a kind land on a payline. The cards' symbols in a combo pay the Mini jackpot and the golden artifacts pay the Maxi jackpot.

Players can play Gold Pile: Toltec Treasure for a chance to land the 4000x grand prize during the Grand Chance bonus which is, essentially, a Hold and Win bonus game with three respins. Landing the Grand symbol rewards the said jackpot prize.

As for the Gold Meter on the left side of the reel set, it is there to show the chances for any of the high-paying symbols on the fifth reel turning into gold in the subsequent spin.

Although the symbols are made of gold, they aren't exceedingly rewarding, for the simple fact that this is a three-tier jackpot game. In terms of symbol value, the only symbol that can pay a hefty amount by landing five of a kind on a payline is the wild symbol, which is represented by the Toltec princess with a ceremonial headpiece and jewelry. That symbol combination pays 80x your bet.

The game at hand is a combination of an enticing gaming model that can spread the odds both in the base game and in the bonus feature. The most striking detail is that any of the two regular jackpots can trigger on any spin in the base game, but also both during the bonus feature and in the Grand Chance feature. Our slot experts are impressed with the game and we are looking forward to playing it some more.