Enjoy a time at the beach on the Dreaming Island slot, a game with a diamond-shaped reel set that comes with 720 way sto win. The win outcomes are made on successive reels, starting from left to right or right to left. The scatter pays on any position and has a maximum prize of 50x on the win for five of the same. 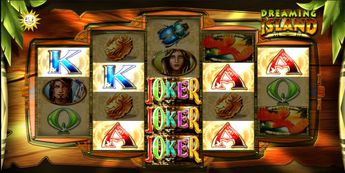 Head to the Dreaming Island slot for a chance to win base game wins and bonus features with few high-paying symbols.

Find your way to this paradise island where you can play for a chance to win cash prizes. Taking place on a diamond-shaped reel-set where the central reel has five positions, Dreaming Island slot by Merkur Gaming looks like a number of slots set in a similar setting.

This time around the slots experts at Merkur take us to a utopia, which judging from the symbols is a mix of places and symbols. Nevertheless, Dreaming Island is an engaging game that can reward up to 96 free spins on the bonus feature.

A separate scatter symbol pays the game's most valuable prize and there is a wild which substitutes for the standard game symbols. In addition to these features, there is also a gamble game which activates by option following any base-game win.

Design-wise the game exhibits a technique that used to be prevalent in video slots of a previous age. This used to be the standard in making popular slots for the land casino floor, so it makes sense that Merkur have opted to follow those lines in creating this reel adventure.

Dreaming Island slots isn't your typical game of the late 2010's nor is it a representative of those amazing slots that have been getting released in the past few years. So a clunky reel set is populated by symbols that have been drawn and rendered pretty ok.

Nevertheless, what makes Dreaming Island are the potential wins, as players will find out that few symbols carry hefty prizes.

How to Play Dreaming Island Slot

Those who've played on them know that Merkur Gaming like to keep their slots nice and clean. There are four square buttons at the bottom of the reels and four more settings and menu buttons in the top right corner.

Down below you can set the bet per spin on Dreaming Island slot by selecting a value from the leftmost square in the corner. Press this button to chose a bet from a range that starts with ten pennies per spin and extends to £20.00 per spin.

The button that states MAX to the right of it simply bumps up the bet to the maximum amount in one click or push.

Between the buttons is a window that states the concurrent balance and the size of the bet again. To the right of it is the autoplay button which is greyed when this option is inactive.

Press it to select between five and 100 automatic spins. Since there aren't any options to set conditional stops, it's best to choose a bet that reflects your intention of how you want to use your balance.

And finally, to simply play Dreaming Island 'manually' which is to say, to cause turn of the reels spin on your own, press the green play button to the right.

How to Win Dreaming Island Slot

Merkur Gaming have made a diamond-shaped reel set and done few wonderful things with it. The wins are paid for consecutive symbols starting on the leftmost reel, except the scatter, which pays in any position.

Two or more symbols on the same reel multiply the win and the symbol wins are multiplied by the credit bet. Furthermore, there is a wild (called joker) symbol which substitutes for any, except the bonus symbol and the scatter.

The most valuable symbol in Dreaming Island slot is the blue gremlin scatter. Five of the same anywhere on the reel-set pay 50x on the winning bet. This may be a rare occurrence but possible still. Symbol wins of four scatters pay 10x on the win.

The stone temple is the second high-paying symbol with 40x for five of the same. Four pay 3x which is a huge drop-off compared to the optimal win.

There are two other high-paying symbol does well to give a jolt to the balance in the case of a win: the man and the woman have symbols that pay 10x on the winning bet for five of the same.

The fiery bird which the phoenix is the game's bonus symbol. If it stops on all reels it starts eight free spins, but these can somehow rise to 96.

Those who are eager to try the game can do so at a number of online casinos that host demo slots. Playing the game as a demo doesn’t lead to any payouts, but it is a good way of trying it out.

Those who don’t care about the visual experience will find a paytable with a collection of symbols that pays serious amounts. Indeed, it helps being lucky to win five scatters, but the return is an instant win of 50x. The top achievement is however winning that maximum number of free spins.

Discover the Dreaming Island slots by claiming a welcome offer right from this page and play at top shelf online casinos.