Jurassic World slot is available at a number of online slots sites and can be played on desktop computers, laptops, as well as mobile devices like smartphones and tablets. The grid is standard, featuring five reels and three rows, but there are 243 ways to win and that’s plenty of possible combinations. The game has a lot of bonus features, but more on that in the review! 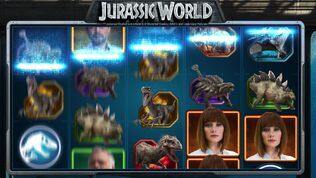 Jurassic Park certainly is one of the top sci-fi series, in fact, it is hard to find a film that influenced modern culture more than Jura Park. So far, a few installments have been released, and Jurassic World was the fourth installment. The Jurassic World slot is based on this film. The film was released in 2015 and it broke few records. It was the first film with revenue that exceeded $500 million during the first weekend alone.

In cooperation with Universal Pictures, Microgaming released Jurassic World slot in 2017, two years later after the film. That proved to be a smart decision as the film has already gathered a cult following. The slot game became popular immediately and the release of the 2018 film sequel – Jurassic World: Fallen Kingdom, only helped its case.

If you have ever played a game by Microgaming before, you’ll know what to expect from Jurassic World slot, and that’s exactly what you get. The game features high quality graphics and like for like resemblance to the film it was based on. After all, this is a branded, official version of the film, done in cooperation with Universal.

The reels take up most of the screen and you will read the title Jurassic World just above them. The buttons are below the reels, just as it is the case with most other Microgaming slots. The characters from the film appear on the reels and they are very realistic.

How To Play Jurassic World

Jurassic World slot is available at a number of online slots sites and can be played on desktop computers, laptops, as well as mobile devices like smartphones and tablets. The grid is standard, featuring five reels and three rows, but there are 243 ways to win and that’s plenty of possible combinations. The game has a lot of bonus features, but more on that below.

As there are many winning combinations, the stake isn’t calculated per payline, but in total. The minimum you could wager on this game is 30p, and that amount can be increased by 30p, and as the amount increases by 60p, up to a total £7.20.

For a win, you should get three symbols across an active way to win, but they need to be arranged from the leftmost towards the rightmost reel, consecutively. You will notice the buttons below the reels. The bet control is below the second reel and by clicking on the plus and minus buttons you can increase or decrease the amount you wager. To the left you will see the total bankroll that you have available at the moment and to the right is the amount that you have won in the previous spin.

The most important button, the play or the spin button is placed in the bottom right corner and to the left you’ll notice the auto play. You can set the reels to spin automatically ten, 25, 50 or 100 times.

How To Win Jurassic World Slot

As we said, you’ll need at least three symbols across a payline for a win. The amount that you might win depends on the amount that you have wagered per spin. As for the characters, you will see six dinosaurs and four human characters, all featured in the film, so if you have seen it, you will recognise them. As you can see, there are no dull cards or characters that aren’t linked to the theme, all symbols are thematic in Jurassic World.

If you check the payouts in the paytable, they will be based on your current stake, so if you decrease or increase it, the payout amounts will also drop. So, let’s assume that you’re playing with £3. You could get a minimum of 20p for a combination of three dinosaurs, although the more valuable dinosaurs pay 60p for three instances across a winning combination. This may not be too much but bear in mind that there are plenty of ways to win, so you can expect to win more often.

The characters have a greater value. You could win up to £20 with a £3 wager. Again, if these amounts seem rather smaller compared to the winning prizes that you could win in other slots, bear in mind that Jurassic World slots feature 243 ways to win, which means that you will see winning combinations occurring a lot more frequently compared to other games.

In addition to standard symbols there are also wilds and scatters. The wild can replace all symbols except for the scatter and a combination of five wilds pays more than the most valuable symbol.

The bonus features are what sets Jurassic World apart from most other slots, as there are few features and they are quite exciting.

First is the Indominus bonus. This feature is activated randomly in the main game. You then get a win that’s between three and five times what you’ve wagered and that’s more than most standard winning combos. But the Indominus Rex is the real deal, or should we say the reel deal. If it appears then you could win up to 1,000 times what you’ve wagered.

This bonus is triggered by a minimum of three scatters, and a combination of scatters also triggers a cash win of up to 100 times your wager.

In free spins mode you can visit three mysterious locations. The location is determined randomly, but if you manage to trigger the feature 15 times, then you get to choose the location where you want to go. These are the three locations:

In the Raptor Den you will get ten spins. Wild scatters appear on the reels, i.e. the scatter symbols act like wilds and remain on the reels until you get additional spins. With three scatters you will get five extra spins for a total of 15.The Gyrosphere will also welcome you with ten spins, but your winnings will also be multiplied. The multiplier starts at two and it increase after every non-winning spin up to a maximum of seven. If you neither of your ten spins wins, the reels will keep on going until you score a win.

Rolling reels is the creation that you’ll get in Creation Lab. After every win the symbols that were part of the combo disappear and new ones land on the reels. This gives you a chance to score multiple winning combinations.

There are plenty of reasons why Jurassic World is a game you should definitely consider. Firstly, it is very exciting, featuring amazing bonus features and a total of 243 ways to win. The RTP is also rather high, above the average of 95%.

If you fancy your chances on this popular slot, register with one of our SlotsWise operators, claim your bonus and play Jurassic World today!