There are few dinosaur themes out there and this one adds to the list, but not only in quantity. Spinosaurus has a payout potential that is quite decent, an engaging gameplay and a set of features that are just enough for the game to keep some of us on our toes. 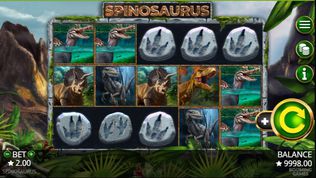 A new slot game by Booming Games makes a sharp turn into the department of paleontology, to showcase a game that's all about stomping down the potential wins. The Spinosaurus slot comes with the standard reel set of three rows and five reels. The number of paylines is 20 and these are always active.

The slots developers at Booming Games have created a medium variance game that has a theoretical return to player of 95.53%. There are few features in the game to make this spicier. There is a free spins bonus, a reel modifier dropping multiple wilds and a symbol upgrade, that can increase the chances for making bigger returns.

Booming Games haven't exceeded themselves with this game. In fact they have so many slots that are of much better quality, but here it doesn't even look like they were trying. The dinosaurs have been drawn ok, let's say, and the do come to life in a very brief display of movement, when they are part of a winning outcome.

But Spinosaurus slots is more about the reel modifiers, as these are the features that define the game. In the event of a reel modifier (symbol upgrade or pterodactyl wild drop), Spinosaurus unleashes the dinosaurs that get the job done. At any rate, the average graphics design isn't the issue. The game can sit well with any slots player out there.

How to Play Spinosaurus Slot

Setting up for the gameplay requires choosing the value of your bet first of all. This is needed at the start because the casino may be offering a default bet that is higher than what you'd like to play for a very first spin.

To change the bet, look for the word BET in the bottom left corner. Booming Games have the same or similar layout for all of their online slots, and this is one where the bet is located right there. Use the minus and plus buttons in order to change the amounts of the bet.

Spinosaurus slot offers a wide range of bets. The smallest starts with one penny per payline, which amounts to 20p per spin. The biggest bet is £10.00 per payline and a total bet of £200.00. Between the lowest and highest bets are many amounts that can be used to wage against the winning odds.

Another setting that may come useful is autoplay. The spin button, which is located in the bottom right, has another smaller button attached to it. This is the symbol for plus, which opens up a shelf with settings for sound, fast play and autoplay. To have the game make the spins automatically, press the number 50 with the play symbol in the back.

How to Win Spinosaurus Slots

When it comes to the payouts the game offers a paytable on which the symbols differ sharply between outcomes with three and outcomes with five matching symbols.

It is quite positive, though, that in the minors category, there are only three symbols that don't return the staked money, for three symbol payouts. The most valuable of the dinosaur footprints on Spinosaurus slot pays 1x. All of the symbols afterwards pay more.

The most valuable symbol is that of the aquatic beast, which pays 50x for five matching symbols. T-Rex is second on the list with 40x. Then comes an Allosaurus with 30x and a Triceratops that pays 20x for five.

The game has a scatter symbol which subs as a wild when up to two symbols are on the reel-set. This symbol is a seething volcano. Three of the same trigger between 8 and 12 free spins.

The second feature is Pterodactyl Wild. This is a random reel modifier which has the dinosaur avian fly over the reel-set to drop up to 15 eggs, which are wild. Five of these on a payline pay a prize of 125x the bet.

Symbol Upgrade is the third and last feature. The minor symbols are footprints that correspond to one othe four dinosaurs. The random feature causes up to 10 symbols to transform into the matching dinosaur.

The game has been made available as a free play demo. Booming Games had released it in this format so that players can try it for free and then decide if it's the game to play ahead.

The company hasn't provided the maximum payout potential. A prize of 50x the bet for five of the big buck dinosaurs is promising that there may be a rather serious potential.

At any rate, it is the features that are going to keep many players interested. Conversely, both reel modifiers can turn up as few as zero symbols in what they do on the reels, but the realistic outcomes may be something between.

Discover the Spinosaurus slots by claiming a welcome offer right from this page and play at top rated online casinos.