Discover the Poison Eve slot, a game of five reels and 20 paylines that is a high variance action with a maximum possible win of 6091x on the winning bet. The game offers three reel modifiers that include two expanding symbols, which include a wild, symbol transformation, a Hot Zone and a special field that shifts on the reel-set. 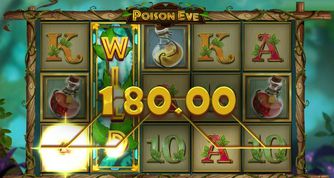 An affair of magic potions, some love-inducing and others not so savory, is hitting the world of online casinos, courtesy of Nolimit City, with a maximum theoretical payout of 6091x on the winning bet.

They've concocted a game in which the central role has been given to an enchantress who goes by the name of Eve. The game itself is called Poison Eve slot, which is a pun of meanings between the girl and the ivy that spreads its saplings across the reel set.

The game itself plays on three rows and five reels which spin across 20 always-active paylines. Poison Eve offers a dynamic adventure on the reels which entails both fun base-game action and some extra features:

The Vine Wild is an expanding wild, Liquid Magic is a symbol transforming feature, and Flower Power is a beast of its own that's always nice to have surprising the middle of your gameplay.

In addition to all this, we have some rather decent symbol payouts, especially with the game's title-giving symbol.

The slots experts at Nolimit City already have a number of slots under their belt that are quite decent, such as Punk Rocker and especially the Tombstone slot, which was hailed as one of the best for 2019. At any rate, the game at hand doesn't lack anything that would render it less desirable compared to these other games.

In terms of the mathematics, that is, the random number generator, we'll share the figures that come with the game but the players out there would have to test the 'rhythmics' of Poison Eve slots themselves and then compared that to some of the other titles by Nolimit City.

The game at hand doesn't have too many moving parts when it comes to the symbols animation, however each winning outcome is marked by lights and a line draws across to mark the payline win or wins. The wild symbol is most lively as it expands on the reel in a way that is rather cool.

How to Play Poison Eve Slot

The game starts with the push of the play button, which is conspicuously placed underneath the third reel, in the bottom, in the shape of a square. Press this button once to have the reels spin once and you can press it again during the same spin to make the reels stop sooner.

Poison Even slot has an autoplay mode too, which can be configured by pressing the small, round play button which is to the right of Spin. Once you've entered the menu you can choose the number of automatic spins and add optional stops, such as on a single win amount or you can place a balance drop or gain limit.

To choose the bet per spin and change the default bet that comes with the game when you start, locate the BET label in the bottom left corner and work the minus and plus buttons to change the amount. The smallest bet is £0.20 and the biggest is £100.00 per spin. These amounts reflect payline coin values of one penny and five pounds for the maximum.

How to Win Poison Eve Slots

To win in the game is not a destination, but part of the journey. Stopping with a balance that shows more than when you started can be considered a win for the player. Symbol payouts are made with three or more matching symbols, which can post to any one or more of the game's 20 paylines.

The high paying symbols in Poison Eve slot are the vials and Eve's symbol and the lower paying amounts come with the high and royal cards, which start with ten and end with the ace.

The red vial pays 25x on the winning bet, the yellow pays 12.5, the blue pays 10x and the green 7.5. Each of the outcomes stated here are for five matching symbols, which can be replaced by the wild in one, two or three instances.

There are three reel modifiers that can drop at any given spin during the base game.

Vine Wild is the wild symbol that can simply expand to cover the entire reel. There can be three wilds from a single spin, confined to the three reels in the middle.

Liquid Magic is the feature that has the Poison Eve character cover the entire first reel. In the event, all vials will transform into the Eve symbol. If all other reels had a vial symbol, the payout of five expanded Eve symbols is 2000x on the winning bet.

Flower Power activates when the bonus flower symbol on the fifth reel, in the square called Hot Zone.

In the event, a portal opens up and stays as such between three and 12 soins, on the first reel. Each spin that follows will create the symbol that is shown in the hot zone, so each portal will show the same symbol.

The remaining symbols that have not posted on a portal reel will come stacked on that reel.

The players can get a taste of the game at hand in its free play demo version at online casinos that host demo slots.

The game’s top payout is 100x on the bet for five eve symbols on a payline, however, get the expanded Eve on the first reel and any vial symbol on the remaining reels will turn into Eve. What is more, if you get a wild it will help towards the 2000x payout from the event, if five of these post on the full reels. Even without this feature, the portals and hot zones come in pretty hand for the win.

Discover the Poison Eve slots by claiming a welcome offer right from this page and play at top notch online casinos.

Pixies Of The Forest