Enter Kingdoms Rise: Forbidden Forest and use your magical powers to hunt down magical winnings based on strong symbol wins and a respins bonus feature. The game has five reels on a diamond-shaped reel-set along with 576 ways to pay. The golden own mask symbol is a roaming symbol that can deliver up to 12 respins, which can be retriggered. 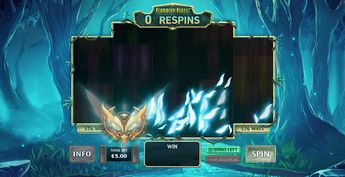 The colorful and epic adventure slots series made by Playtech's Origins outfit return with another edition, this time set in a deep wood inhabited by a race of sorceresses and sharpshooters. The players will discover 576 ways to pay instead of standard paylines, which deliver the wins in the consecutive reel fashion.

The Kingdoms Rise: Forbidden Forest slot comes with the owl respins feature and with flying wilds. Just like in the other three releases that are part of the Kingdoms Rise series, here too you can buy features in the shop, thanks to the tokens that are collected during the gameplay.

The reel action on the Kingdoms Rise: Forbidden Forest slots unfolds on a diamond-shaped reel-set that has three, four and five rows. Land three or more matching symbols from left to right. The maximum theoretical payout coming from a single spin on this slot can reach up to 400,000x.

In this release the theme is an enchanted forest that is inhabited by creatures of magical properties, that are very likely summoned by a group of female warriors. Again, Playtech Origins have come up with a fantasy world in which they have embedded the reel adventure on the Kingdoms Rise: Forbidden Forest slots.

The gameplay is dynamic and the symbols do spring to life when part of a winning outcome, which wasn't the case with the Kingdoms Rise: Guardians of the Abyss slot. There is a Celtic musical theme that creates a very fitting ambiance for the gameplay. Compared to the other releases, this one has been given a tad more time and attention, yet retains the look and feel of the rest.

Everything looks familiar here, if you have played any of the Kingdoms Rise slots series or a number of other online slots by Playtech.

The Spin button can be found in the bottom right corner of the screen and to the left of it are the buttons for autospins and turbo. The latter sets the reels spinning and stopping faster and the former lets you choose from a number of autospins presets with the optional Stop on Feature preset.

On the opposite end of the screen is the window that displays the total bet in the Kingdoms Rise: Forbidden Forest slot. You can use the minus and the plus buttons to scroll through the available amounts for the bet per spin. The smallest bet of the game is ten pennies, while the maximum is an unbelievable £2000.00 for a single spin.

This amount trumps by far even the £1000.00 in the Sands of Fury slot, and is a far cry from the max £300.00 on the Guardians of the Abyss. Why such a huge bet? We can't tell, but there are many other normal amounts that are most likely to be used by the overwhelming majority of people.

To access the paytable select the Info button. This is where you can find a wealth of information about the game rules, the bonus features and symbol pays.

The most valuable symbol in the game is the warrior in red. Her symbol pays 200x multiplied by the triggering bet when five of the same stop on a payline. This and the rest of the character symbols can be substituted by the Wild, which is represented by a green amulet.

The sharpshooter character pays 50x for five and the sorceress pays 35x. Two additional picture symbols pay 25x - those of the bear and the panther. The rest are gems and thees pay varying amounts depending on the gem.

The bonus game in this slot comes with the symbol of a golden owl mask. When it appears on the reels it will start to roam and shift position with every respin.

The wild and the golden owl can't land on the first reel in the Kingdoms Rise: Forbidden Forest slot bonus and in the base game.

The slots experts at playtech have released this game as a demo. This is part of the full series, all of which games can be played for free. On the other hand, with such small bets such as 0.10 per spin, it is a pity not to play with real money and engage with the reel adventure that can lead to potential winnings that are real.

The game is very much like the rest of the series however it does have its own characteristics. Not only the design but also the gameplay and the bonus features spell out different ways towards the potential wins. It is still a mystery to our slots experts why such a huge maximum bet on this slot. Does it mean something or did PLaytech simply want to leave the option?

Claim a welcome offer and discover the Kingdoms Rise: Forbidden Forest slot at one of the casinos on this page.