There’s a group of cute little characters that will help you get the prizes you’re looking for. They’re called the Woonsters, as this slot game is called. Woonsters is a three-reel slot that comes from Greentube, also known as Novomatic. It’s a game with a small grid but many features and modifiers, where rewards go up to 500x the stake. This low-medium variance game features Key scatters, the Upper Game and the Soplavelas bonus game. Find out more in our full Woonsters Slot Review below. 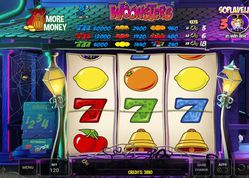 The number of online slots with three reels has decreased and most of the new slots are released with a bigger grid and plenty of features. But, if you like to play games that are as simple in mechanic and gameplay as possible, the Woonsters slot is the right choice for you. It’s a fruit-themed slot machine with a modern twist. There, you’ll be accompanied by a group of cute characters, known as Woonsters. The game is packed with a bunch of extras, available to deliver payouts of up to 500x the stake. If you want to learn more about these features, carry on reading our Woonsters Slot Review. 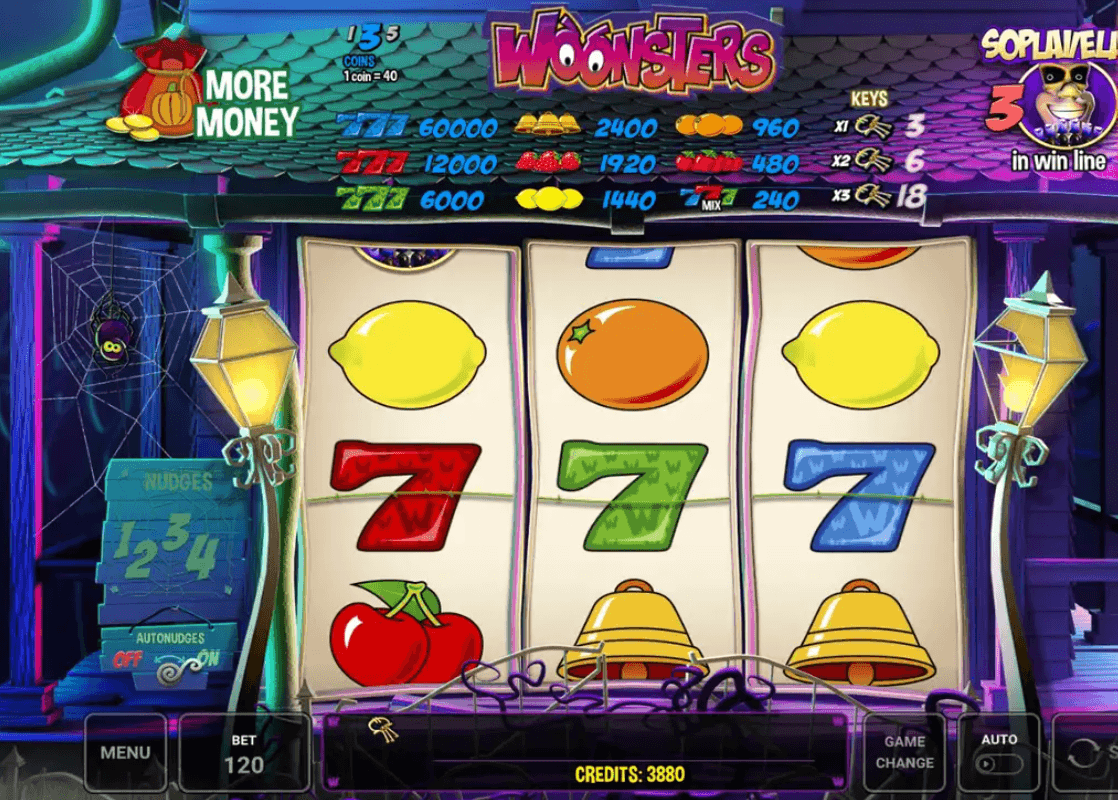 Woonsters is a fruit-themed slot machine with 3 reels and 1 payline, but there’s an Upper Game area that allows you to play with up to 8 active paylines. Even if it looks like a simple game at first sight, it’s a much more complex game compared to the regular fruit slots. It has Halloween vibes, with spider webs and little monsters floating around the screen.

You can join the Woonsters at stake levels that range from £0.10 to £20 per spin. Just press the ‘Bet’ button located under the reels to adjust your preferred betting option and then you can hit the spin button to start playing. In the Woonsters slot, winning combinations are formed by landing 3 matching symbols on a payline. The value of your win depends on the value of the symbols that were part of the combination. You can find each symbol and its value in the game’s paytable. This Novomatic slot allows you to win a maximum prize of 500x the stake, thanks to the bonus features. You’ll learn how to trigger these features and extras below in the bonus section of our Woonsters Sot Review. 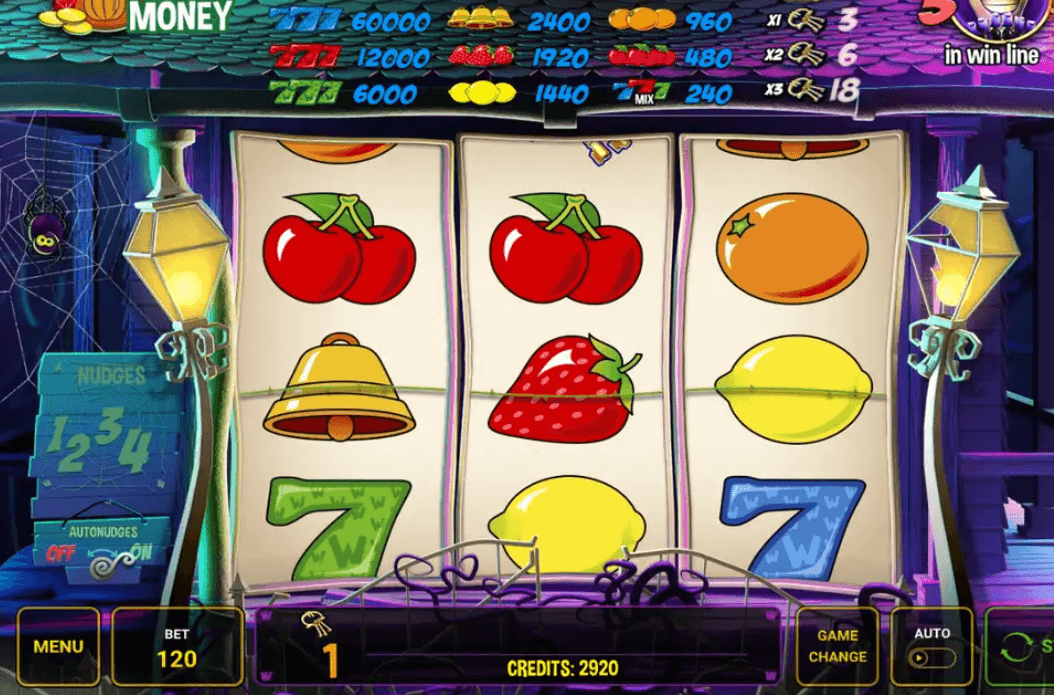 Woonsters is a spooky-themed slot that features a group of goofy little monsters. The reels are placed in front of a haunted house and you’ll notice spider webs on the left side of the screen. Overall, it’s a well-designed game with high-quality graphics and visuals, so you’re guaranteed a great time and gameplay. The reel action is accompanied by a spooky soundtrack which adds to the whole gaming experiences.

What’s disappointing about the Woonsters slot is that the goofy little monsters aren’t used as symbols in the game. They are the ‘Woonsters’ so it’s obvious that they should be placed on the reels. But, in this game, the symbols are standard and feature fruits and lucky 7s. There, you’ll come across lemons, cherries, strawberries and oranges, as well as bells, green 777, red 777 and blue 777. However, the Woonsters act as symbols during the bonus features, so you’ll still be able to take advantage of them and win big prizes.

It’s still unknown what the theoretical RTP (Return to Player) percentage of the Woonsters slot is. However, we assume it’s something about 96% or more, which is the industry average. On the other hand, the game has a low-medium variance, so wins will come easier than usual, and they will be with a lower value. In total, you can end up winning 500x the stake in the Woonsters slot, thanks to the bonus features and extras. If you want to learn more about different RTP and variance models, read our Variance, Volatility and RTP guide.

Gameplay and Features on Woonsters Slot

As it was mentioned above in our Woonsters Slot Review, Greentube/Novomatic has packed this game with a wide range of extra features that can bring you the biggest prizes. Even if the game looks so simple and small at first, it’ll become more complex once you start playing. The gameplay is simple and straightforward so you’ll quickly learn how to play and how to win. And now, let’s see what this game has to offer in terms of features and extras.

During the regular, base game spins, you’ll have the option to Hold up to two reels, while the third reel will re-spin and hopefully give you a new win.

The Nudge feature is also available in the base game and you can enable Auto-nudges at any time. It allows you to push/nudge reels by up to 4 positions, depending on the number they stopped when you press ‘Stop’.

Up and Down Feature

The Up and Down feature is offered in the base game and it allows you to get access keys or increase your winnings.

This feature allows you to double the prize you have won or convert the prize into keys to take part in the Upper Game.

The Woonsters slot is HTML5 optimised, meaning it works seamlessly on any mobile device and any operating system. The design, layout, bonus features and everything that is part of the game works without issues when playing on a smaller screen.

Novomatic is an established slot developer that has many popular and recognisable games in its collection. If you’re interested in playing other Novomatic slots, make sure to check the Strike It Gold: Win Ways slot. The game uses the Win Ways mechanic, which is an imitation of Megaways, so you’ll be playing with up to 117,649 ways to win and free spins feature with an unlimited progressive multiplier. Another great game from this developer is the Scat Cat Fortune slot, a Chinese-themed game where the cat will help you trigger free spins and win impressive prizes. Finally, you can check the Lotus Flower slot and enter a beautiful garden filled with rare trees, peacocks and lotus paddies.

Woonsters is an innovative and well-looking slot that has the potential to become a popular title among the players. It has plenty of entertainment thanks to its unique features and extras, including the Upper Game that brings something new to the table. For that reason, if three-reel slots are your thing, we recommend you try spinning the reels of the Woonsters slot by Novomatic.

Discover the Woonsters slot by claiming a welcome offer right from this page and play at top-notch online casinos.