Players who reach to play Book of Gold Multichance will find a reel set comprised of three rows and five reels that spin across 10 paylines. Players can make winning outcomes with at least three symbols, however, there are few symbols that can pay for two of a kind also. The game has a theoretical return to player (RTP) of 95.40% and the variance is high, which means, the big pay potential is there at any spin. 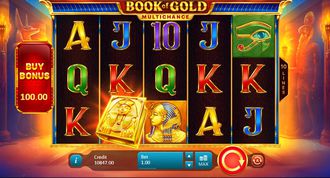 There is a new book on the block, it is made of gold and it can open up to a marvellous passage that spells out a potential winning outcome of 10,000x your bet. Players can win cash prizes up that number, which is an amazing possibility nevertheless. But both the base game and the bonus feature are quite amazing and follow the concept of the "Book of" which has become a think within the Ancient Egypt genre.

Worth noting is the game is sequel to two other slots: Book Of Gold: Symbol Choice Slot and the Book Of Gold Classic Slot, also by Playson.

In terms of gameplay details, Book of Gold Multichance slot comes with a wild symbol which is also the scatter. In this regard, the game follows the 'rules' of other games that go by the name. The scatter symbol triggers the free spins bonus which itself comes with an extra feature that can help trigger big winning outcomes. The game's most valuable symbol pays 500x multiplied by the winning bet.

In terms of graphic design there are two aspects to this particular game: the reel set and the background. The latter has depth and color in it, as the statues of the jackal god and the bird god are glowing in the embers that emanate from behind the reel set.

Speaking of that other element in Book of Gold Multichance slots, there is a set of high-paying symbols that are made to come to life when there's been a winning outcome consisting of them on a payline.

The symbols of the game consist of a golden plate that shows the profile of a pharaoh, a depiction of Amon Ra, the famed Eye of Horus and the ankh symbol with wings on the sides. The scatter symbol is a golden book with the face of a sphinx.

Visually, the game has been given enough attention to detail in order to allow for a decent gaming experience and there is a musical theme that can contribute to that.

How to Play Book of Gold Multichance Slot

To start playing the game, the players need to explore the reel set and what is around it for a bit. Seasoned slots players will find all of the buttons right away, but let's just make some pointers anyway.

The Spin button is the big, red circle in the bottom-right corner of the page. The same button changes to the symbol for fast-forward symbol while the reels are spinning. To press that button causes the reels to short-stop. Players who prefer to enjoy a speedier adventure can enable the quick spins option by selecting the cog button in the bottom right corner.

Book of Gold Multichance slot has the autoplay option available also. This is accessible by selecting the button to the right of spin. The menu that comes up has eight presets for the number of automatic spins and there is an advanced menu with options to set a loss limit or a single win limit. When ready, simply press Start Autoplay.

How to Win Book of Gold Multichance Slots

Players can land winning outcomes with two of more symbols. In fact, half of the symbols can make payouts for three symbols at the least and half can pay for two of a kind. The wild symbol of Book of Gold Multichance slot is precisely that and it is also a scatter symbol and one that pays 2x for three of a kind, 20x for four of a kind and 200x for five.

The bonus is triggered with three, four of five symbols, however, regardless of the number of symbols the player gets 12 spins and a special symbol at the start of the bonus. A similar game is Book of Sun: Choice slot as players will notice some more engaging graphics and the same extra feature.

The special symbol expands and can pay independently of a payline, as long as there are enough symbols to make a winning outcome.

When you play Book of Gold Multichance you can buy a bonus feature by pressing the button on the left. The bonus can be activated immediately but costs 100x your bet.

The game is available as a free play demo slot at online casinos that have a roster of games that are available in practice play mode. This enables players to try Book of Gold for free and test its features and gameplay.

The payout potential is no less than 10,000x and it is possible during the free spins bonus, especially if the special expanding symbol is the high-paying pharaoh, but any symbol can trigger decent payouts in the bonus.

Discover the Book of Gold Multichance slots by claiming a welcome offer right from this page and play at top rated online casinos.