Discover the world of the well-known ancient Egyptian god of the sun in the Solar King slot. This game is an amazing release from Playson with generous bonus features including free spins. Many multipliers and wild symbols will give you the opportunity to win great prizes. The whole action takes place on five reels and there are 20 active paylines. In our Solar King Slot Review, you can learn more about the features of this Egyptian-themed game. 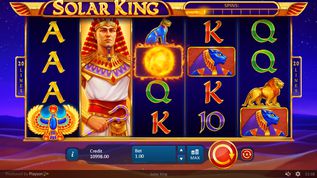 After providing us with online slots like Solar Queen and Solar Temple, Playson is coming up with a third game in this series, called Solar King. Solar King slot features the same Ancient Egyptian theme that we’ve seen in the other games in the series, with high-quality graphics and a couple of features worth giving a chance. It’s a five-reel, 20-payline video slot featuring a top jackpot that has the opportunity to reward you with up to 2,221x your stake.

The Solar King slots is expected to have high variance, which means that you won’t have many frequent wins, but when you win, it will be a big prize. On the other hand, the Return to Player (RTP) percentage is 95.45%, a little below average which is 96%. RTP refers to the amount of money that the game gives back to players over time, which means that with every £100 wagered in the Solar King slot, you can expect to win £95.45 back.

When playing Solar King slots, you’re able to spend anywhere between £0.20 and £100 per spin. With the maximum payout being up to 2,221x your stake, it means that you can win up to £222,100 from a single spin in this game, which is a decent reward.

The theme and design of the Solar King slot are already familiar to the players who have played some of the other games in this series. This is an online slot which takes you back to Ancient Egypt, where the main character is the King Ra. Solar King is set on a background of the Egyptian desert and it starts at nighttime. The more rounds you play, the brighter the sun gets until it’s shining on the tenth spin. Overall, the game has high-quality design and graphics, and the reels are dark blue with golden frames.

Since this is an Egyptian themed slot, you can expect to find different symbols related to the theme, such as the Pharaoh, Sun, Bird of Ra, Horus, and Bastet, all of which are high-paying symbols. The Pharaoh is the top-paying symbol among them and gives 10x for five of a kind. The rest are low-paying symbols represented by royals from 10 to Aces. The Sun symbol has an important role in the game, as it activates the Flaming Frames bonus feature, while the Bird of Ra is a scatter symbol.

How To Play Solar King Slot

The Ancient Egyptian adventure starts with the push of the spin button, which is a big circled button located in the bottom right corner of the screen. But, before you start spinning the reels of the Solar King slot, make sure to adjust your bet per spin according to your preferences. This can be done by pressing the up and down arrows located next to the spin button. There is also a Max Bet button that will adjust your bet per spin on maximum, which is £100.

On the right side of the spin button, there is an Autoplay button that you can press and let the game spins on its own. You can adjust 5, 10, 25, 50, 100, 250, 500 and 999 auto spins, as well as a single win limit and a loss limit. In addition, if you want to learn more about the value of the symbols as well as on how to play this game, press the “i” button on the left corner below where you’ll find this information.

How To Win Solar King Slot

Winning in the Solar King slot is possible with landing at least three matching symbols on one of the game’s paylines from the leftmost reel. Alternatively, when you land a wild symbol on the reels, it can help you to form a winning combination with less matching symbols than three. In terms of value, it depends on the symbols that are part of the winning combination. Of course, the highest-paying symbols are the picture symbols, so if you form a winning line with them, you’re in luck.

The Solar King slots has a few bonus features that make the gameplay more exciting and interesting. If you’ve played the other Playson slots that are part of the “Solar series”, you will be familiar with the bonus features. Let’s take a closer look into them.

Like we’ve mentioned above, the Sun symbol has a major role in the gameplay because it triggers an interesting mechanic. The Flaming Frames bonus feature is active during the main game and consists of 10-spins cycles. Each Sun symbol landed on the reels activates a Flaming Frame. The frame formed where the Sun landed will stick on the reels for the next 10 spins, at the end of which it will be transformed into a wild symbol. At the same time, if you get another Sun symbol landed on the reels, the multiplier will increase, which can lead to wild multipliers of up to 10x your stake.

The Solar King slot can be found as a free play demo version at online casinos that host demo slots. Playing Solar King in a free play mode can help you learn how the game works and how frequently it lands winning combinations.

From our Solar King slot review, we can conclude that this game is a great option for players who enjoy Ancient Egyptian-themed slots. There are interesting bonus features where the Sun symbol has the main role. Moreover, if you manage to trigger the free spins feature, you can win great prizes. The Solar King slot is completely mobile optimised so you can also enjoy it from anywhere you want.

Discover the Solar King slots by claiming a welcome offer right from this page and play at top-rated online casinos.