Discover huge potential winnings of 1000x on the symbol wins and other potentially big payouts up to that number. This is a five payline slot with five reels that has a scatter and multipliers of up to x5. The theoretical Return to Player is 95.66% and the variance is medium to high. 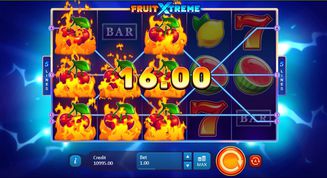 Spin on the Fruit Xtreme slots for a chance to win up to 1000x on the winning bet.

Here is a retro slot game that defines the genre of fruit slots. Fruit Xtreme is very simple, packs those fruits, sevens and BARs, and plays across classical five paylines. The game has three rows and five reels that can deliver symbol win maximums that are from Playson's playbook.

Considering that the slot originates from this company, we expected it is going to play in the same vein as many of their previous releases. So, it is a signature Playson slot that brings more of the same and this isn't such a bad thing, unless you've been spoiled by playing some of those online slots with stunning graphics.

The players will find that besides base game wins, Fruit Xtreme slot has multipliers of up to x5 and a scatter symbol. The game doesn't have a wild, so the symbols can't enjoy the benefit of substitutes. Symbol payouts are made with three or more symbols and these can fall on one or more of the always active paylines.

If it's time to kick back and relax by playing a game with simple graphics, then this is the game for that occasion. Playson have carved their niche in the market making games that are classical to say the least. However, their productions are quite modern and bring extras that aren't found in those slots machines of old - things such as free spins, multipliers, and more.

In terms of the design features the game has the symbols that are very common in the world of online slots, or at least in terms of fruit slots of which there is a huge number. Fruit Xtreme slots has watermelons, lemons, oranges, cherries, sevens, plums and BAR.

Since there isn't a musical theme, the dead silence is disrupted by some thudding sounds and a number of classical casino sound effects.

How to Play Fruit Xtreme Slot

Your adventure on the reels can begin with the push of the spin button which is in the bottom right corner of the screen. The big orange button sends the reels spinning once, deducting one time per spin the selected bet.

To change the bet you can work the down and up arrows which can be found underneath the reels. The selected bet will be displayed on the window to the left.

The smallest bet begins with £0.10 per spin, whcih is two pennies per the five paylines. The biggest bet is £100.00 per spin and that is £20.00 multiplied by the symbol payline win.

Fruit Xtreme slot has an autoplay option whose button can be found in the very bottom right corner, to the right of Spin. Here the players can select from the menu the number of automatic spins and there are optional stops such as adding a Loss Limit or a Single Win Limit.

How to Win Fruit Xtreme Slots

The winning outcomes are made with three symbols of the same kind. These can appear on one or more paylines but must start on the leftmost reel.

In terms of value, the most lucrative symbol on Fruit Xtreme slot is 1000x multiplied by the winning bet.

By all standards, this symbol pays a jackpot amount, but you will need to see five of these symbols falling on a payline.

This payout amount doesn't end there, because it could reach a higher amount on a single spin, but that will be disclosed further in the text.

Next in terms of value is the watermelon symbol where 200x is paid for five symbols. The rest of the fruit symbols bring payouts of 20x for all of them, while BAR pays 10x for five.

The scatter is a golden star and pays 50x for five and these can fall anywhere on the reel set to grant a prize.

Playson haven't included a bonus feature on this game in the classical sense, however there is a bonus outcome which is possible with symbol stacks.

Fruit Xtreme can throw in reels that are stacked with the same symbol. There is the possibility of three, four and even five reels posting the same symbol in which case there is a multiplier of x3, x4 and x5 on the winning bet.

Playson are known for releasing their online slots as free play games, which means anyone can access these games and try them, if that can help players make a decision whether or not to play a certain game.

A classical game, without much graphics design hoopla but with a whole lot of lucrative symbol payouts available to the lucky players out there. On the highest bet of 100.00, the most lucrative symbol win of five sevens pays an amazing prize of £100,000.00 while the scatter pays £50,000.00.

Discover the Fruit Xtreme slots by claiming a welcome offer right from this page and play at top notch online casinos.