The game comes with three rows and five reels. These can trigger winning outcomes across 20 always-active paylines on which winning outcomes can form with three or more symbols. Rise of Egypt Deluxe is a high variance slot that has a theoretical return to player of 95.56%. Players can win cash prizes of up to 1145x multiplied by the winning bet. 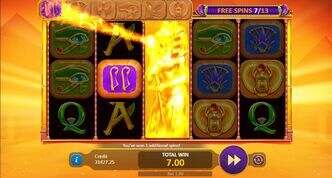 Playson can make the glory of Egypt rise from the dead and cover the reels with expanding symbols, golden amulets and the auspicious ankh symbol. Rise of Egypt Deluxe slot also has a bonus feature and the option to triggering instantaneously, albeit at a cost. Nevertheless, players who play Rise of Egypt Deluxe may chance upon a number of high-paying prizes with the help of upgraded symbols that are part of the free spins bonus.

What appears to be another ancient Egypt-themed slot is in fact an engaging game that puts into place familiar symbols, but at the hands of Playson's unique math models that can trigger small, medium and big wins. The free spins bonus is especially interesting because it borrows the symbol transformation feature that players may remember most vividly from the Eye of Horus slot.

Playson is no stranger to making games with awesome graphics even though they specialize in fruit-themed pokies, which, in all objectivity, often underwhelm with the design. Nevertheless, the game at hand does nothing wrong to anger the gods of Egypt. All of the symbols are in the style, with the high-paying category consisting of a golden pyramid, a scarab, Osiris, the Eye of Horus, two earrings and a blue lotus flower.

The wild represents Bastet, the cat-god, whose image has been embossed on a golden plate, which by the way expands at times, making this a symbol that is much anticipated and fun to experience for its animated features. Rise of Egypt Deluxe slots comes with a number of animated details, such as the scatter symbols and the gaining of a winning outcome, which is marked by golden dust and light.

How to Play Rise of Egypt Deluxe Slot

Setting up for the game is as easy as selecting the bet amount and pressing the play button. Playson have all of the controls and settings underneath the reel set, always there in a familiar location that makes changing bets intuitive and done in two moves.

The range of bets is wide and serves the purpose of lowering the bet on a hunch or upping it when the going gets smooth or, again, because of a hunch feeling. Whatever triggers a decision to switch the bet, players need to simply use the down and up-pointing arrows. The smallest bet is £0.20 and the maximum bet is £100.00 per spin.

Rise of Egypt Deluxe slot can be set in motion in its autoplay mode by selecting the button to the right the big purple circle. The menu enables players to choose one of the automatic spins presets and add optional controls such as a loss limit and a single win limit in order to stop this mode when they've been met.

Last but not least, Rise of Egypt has a paytable that can be accessed by pressing the 'i' button and there are a couple of settings in the bottom-right corner - for sound and for turbo spins.

How to Win Rise of Egypt Deluxe Slots

As per the usual, winning outcomes require three three matching symbols, or more, to land on one of the paylines. The game can trigger multiple winning outcomes across the reel set from a single spin.

Rise of Egypt Deluxe slot comes with a wild symbol which doesn't pay itself but it substitutes for all other symbols, except the scatter. The wild is an important symbol for the free spins bonus and we'll get there soon.

The most valuable symbol is the scatter pyramid. Five of a kind pay 50x, four pay 15x and three pay 2x multiplied by your bet. Of the remaining symbols. the golden scarab is second most-valuable symbol, paying 20x for five, 10x for four and 5x for three of a kind.

The remaining high-paying symbols can pay between 0.5x and 15x.

It takes three golden pyramids to trigger the free spins bonus. Players can get a cash prize in return, as per the payouts above, plus 12 free spins. During the bonus, the wild is an expanding symbol that adds one free spin and upgrades the high-paying symbols.

Each symbol that's been upgraded is shown at the top. That symbol is removed from the reel set, which leaves fewer symbol sto clutter the game so that the chance for winning with better-paying symbols is greater.

Also, the scatter symbol is still part of the game and can retrigger the free spins bonus.

Players can enjoy the game as a free play demo slot, which enables them to check out the base game and buy the free spins bonus with faux credits, at 65x the cost of the bet. While playing a demo can get as exciting as playing with real money, making a big win means you will only get to keep the faux credits.

While Rise of Egypt was fire, the deluxe version is, well, deluxe and for that matter more exciting. Players will definitely enjoy the symbol upgrade feature, which, as we said, is just like the one in Eye of Horus, which is precisely popular because of it.

Discover the Rise of Egypt Deluxe slots by claiming a welcome offer right from this page and play at top rated online casinos.

Cat Wilde and The Doom of Dead

Legacy of the Gods Megaways