The game comes with a reel-set of three rows and five reels that spin across ten paylines. The vertical layout of the screen is fit for mobile play, but the game plays marvellously on computers also. In terms of technical specs, the theoretical return to player is 96.58% and the maximum possible payout is no less than 17,500x. 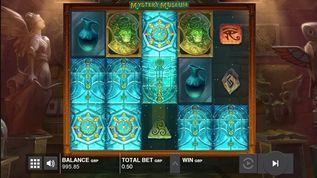 Push Gaming are quick to return from their hiatus after releasing Razor Shark slot, their latest great game which was and in fact still is one of the most popular slots in 2019 and 2020. So we are wondering how loyal Push Gaming fans are going to manage the transition from shark-infested reels to a curious night inside the Mystery Museum slot.

Mystery Museum doesn't sound like a title that is going to get too many people excited unless there are museum-ologists amongst the slots playing body, but this is where we come in to break down the game to its specifics and tell you all about the extra features and standard components. About a dozen spins on the reels and it seems like the game is more than playable, which justifies our anticipation for the potential win outcomes.

In terms of graphic design, the game is woven with spectacular symbols that point to some ancient and some not so ancient civilizations. The symbols consist of warriors' headgear, rune stones, the Egyptian symbol of the eye, the shield of the medusa, some vases and a beautiful display of blue glasswork, which readily expands across the reels.

Mystery Museum slots is filled with liquid particulates, especially evident in how the wild symbols manifest themselves on the reel set. In fact, most of the high-paying symbols have a fair bit of anima in them, making the gameplay fun and engaging. Your gaming experience is topped by a solid musical composition that has a mysterious feel to it - and we are least surprised of it.

How to Play Mystery Museum Slot

Setting up for the gameplay shouldn't take a whole lot of looking around. The menu button, which is represented by three horizontal lines on mobile, can be found in the bottom right corner of the screen. Pressing it opens up a small Pandora box of buttons and settings.

Setting up the bet when playing on your computer is as easy as choosing one of the available amounts in the Total Bet window. In that respect, Mystery Museum slot has a wide range of bets that start at 10p per spin, making the game accessible to just about anyone. The maximum bet and amounts leading to it are for high-stakes, as it is a three-figure number of £100.00 per spin.

One of the ways to best enjoy a slot game is by letting it play on its own. There is no inertia involved here, just the random number generator generating automatic spins in succession. Choosing a number from the available presets lets you specify that number, while additional options are a great way to place some brackets on how much you are willing to spend while Mystery Museum is playing in this mode.

How to Win Mystery Museum Slots

The three by five layout and the ten paylines invite winning outcomes with at least three symbols. The ten paylines can dictate pace that is similar to Eye of Horus and some of the established Book of - 'fill in your Egypt-related thing here'.

This isn't such a bad prospect for a diverse payout potential. In other words, one can expect to see mostly low-paying wins, however, both medium and big wins can hit on any spin.

Mystery Museum slot does have a buy feature, called Power Gamble, which charges more for the bet but ups the odds at getting better symbols.

We can't help but make another hat-tip to Book Of games, specifically, Book of Dead, because the samurai helmet, which is the wild also subs as a scatter, triggering the free spins round.

The paytable itself isn't that bad, in fact some of the high-paying symbols can get quite generous with five matching symbols on a payline. Admittedly, that is a rare sight but possible nevertheless.

So that leaves us with bonus features, which Mystery Museum has three of. First off, there is a mystery reel capacity that can pick any of the game's paying symbols and replicate it in another location. Also, just like in, say, Book of Adventure Super Stake Edition slot, this game pays prizes even if the stacked mystery reels are not adjacent.

The Samurai's headgear triggers eight, ten and 12 free spins for three, four and five symbols anywhere on the reels. Mystery stacks can crop up during the bonus and they get the benefit of a nudge.

Also, there is a gamble feature that lets you take any winning outcome and stake it against the odds for a chance to make it double.

Players can give the game a try at online casinos that offer slots in practice play mode. This is the best way to have a go on any game with free credits, which means, faux wins. Another way to be is to play Mystery Museum with the smallest bet of 10p and at least have the feeling of playing with real money.

Not much more can be said about the game, except it is one potentially lucrative slot but also one that comes with high volatility. That means, big wins are possible but the wait may be excruciating. Then again, who knows with these random number generators.

Discover the Mystery Museum slots by claiming a welcome offer right from this page and play at top-rated online casinos.