Enter Cop the Lot Safegrabber slot by Blueprint Gaming with its five reels, three rows, five paylines and 16 bonuses. This highly exciting slot game leans on the retro side, but it surely plays and behaves like a board game married to a slot machines.With bets that range from 0.5 to 20 quid, the players have a decent range and a quite decent return to player outcome of 96.57%.

Anyone in the mood for a retro slot that has 16 bonus features and excellent surprises? Read our full review on Cop the Lot Safegrabber slot, by Blueprint Gaming to get all of the details.

Even though Cop the Lot Safegrabber slot is a retro-themed slot, it is actually a one of a kind game created by the developers at Blueprint Gaming. As soon as you enter the game, you will notice the roughish look and feel of a game that by all means looks like a retro slot machine. However, in reality, it packs some exceptional prizes and not one, not two, but astonishing 16 bonus features.

The classic fruit symbols spin on the three rows, five reels and five paylines, hence the impression of a retro game. Landing three or more of these will pay a prize on one or more of the game's always active five paylines. Above the reels are two columns, one blue one yellow, and one for bonuses and the other with cash prizes. The gameplay can trigger any or both of these from a successful spin.

Between these columns are two other squares. The bottom one is part of the gameplay and represents a grid filled with boosters that the players can win. The upper square displays the potential winnings when the player gets one, two or three symbols of a safe. In addition to the standard gameplay of pushing the Start button to spin the reels, the game offers the gamble option and a random prize of one of the rows, such as Cash Combo, Cash Climber, Go for Gold, Win Spin and so on. 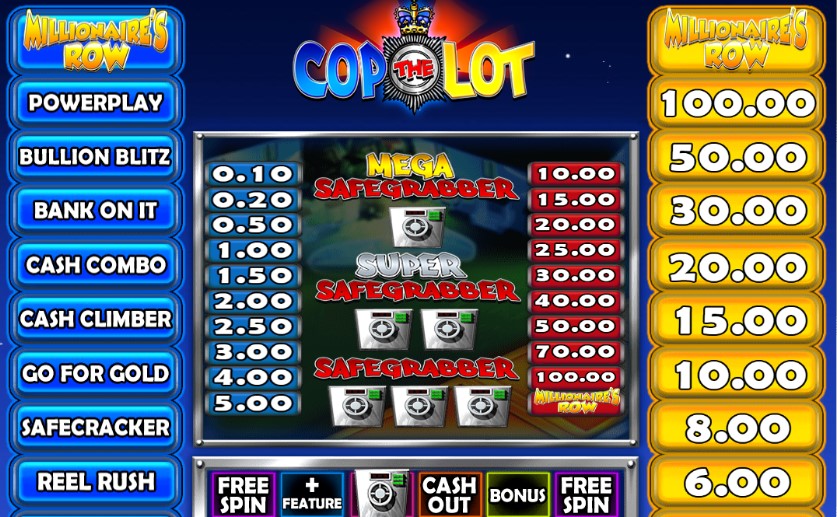 How to Play Cop the Lot Safegrabber Slot

Setting up for the gameplay is more than easy. Before each spin, the players can go to the Stake button, which is to the left of the blue-bar Autoplay button and select one of the betting sums from there. There are more buttons on this game than on any given slot we've encountered, so let's make some of these known for their functions and properties.

The smallest bet that could be taken is five pennies and there are multiple options in a wide range of bets that don't close with an exorbitant sum, rather, with a somewhat modest bet per spin of £25. Besides this, there is an autospin option which allows the reels to spin on their own for a number of times that are specified in the selection. There is a win or loss limit in this feature as well, which lets the players control precisely what is being spent and up to what amount.

The Cop the Lot Safegrabber slot's paytable is more than welcome because it opens up a view into all those obtainable features. Besides the value of the symbol wins, there is information about the bonus features and few other relevant and pertinent details about the gameplay. 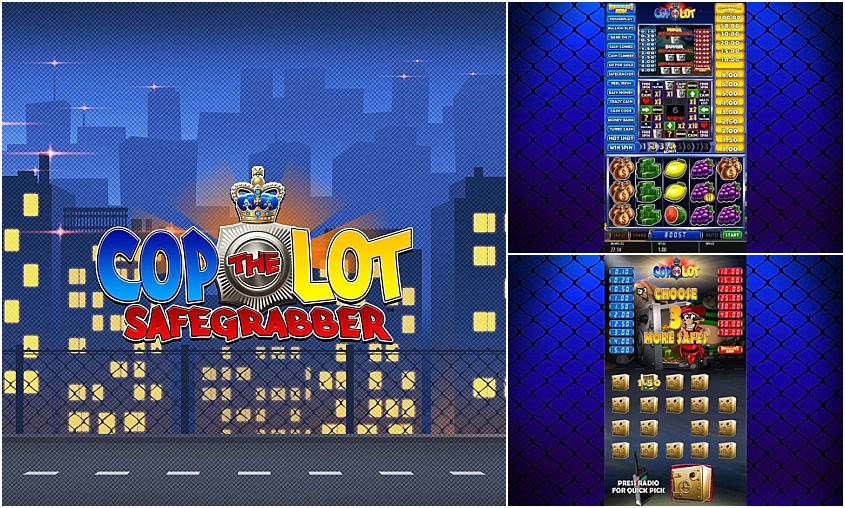 How to Win Cop the Lot Safegrabber Slots

The gameplay of Cop the Lot Safegrabber slot is quite dynamic. The bottom square, which is a grid of various icons and symbols is very much tied to the base game. The green arrows point to what is next in line, and that could be a Free Spins, multipliers from x1 to x10, one safe, Bonus, +Cash, a heart and so on.

Once the bonus gauge has been filled to the eighth square, the players can enjoy a game of randomized spins in which bonuses could abound for a succession of turns. There is the option of claiming the pot, which is a sum of money that stands in the place of Cop the Lot Safegrabber slot logo, in the top of the slot game, but if the name of the game is taking the plunge and seeing what could unfold from it, then keep pushing start and potentially win Money Bank, Turbo Cash, Win Spin, Hot Shot, Easy Money or any other of the 16 features. 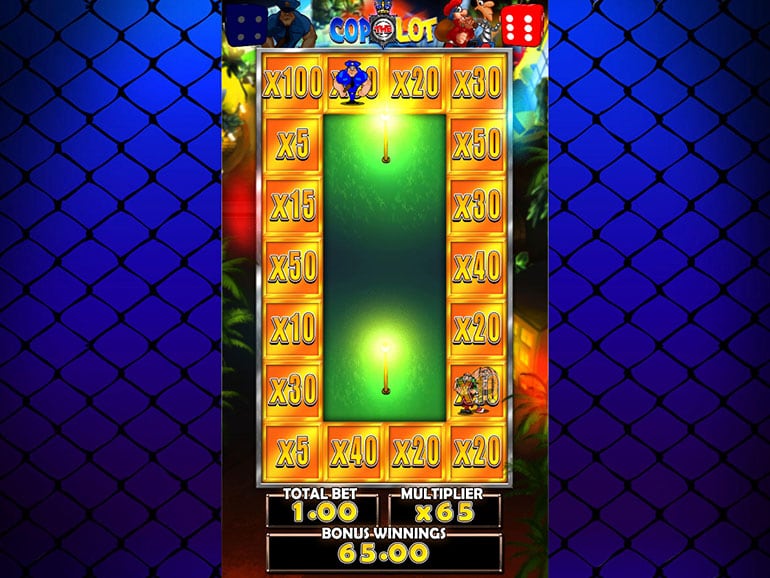 The game doesn’t have a scatter symbol so all of the bonus features, all 16 of these, come by way of the wins progression. Here is included the free spins bonus feature which is one of these, and could be won at random. Let's take a detailed look in all of the 16 Cop the Lot Safegrabber bonus features: 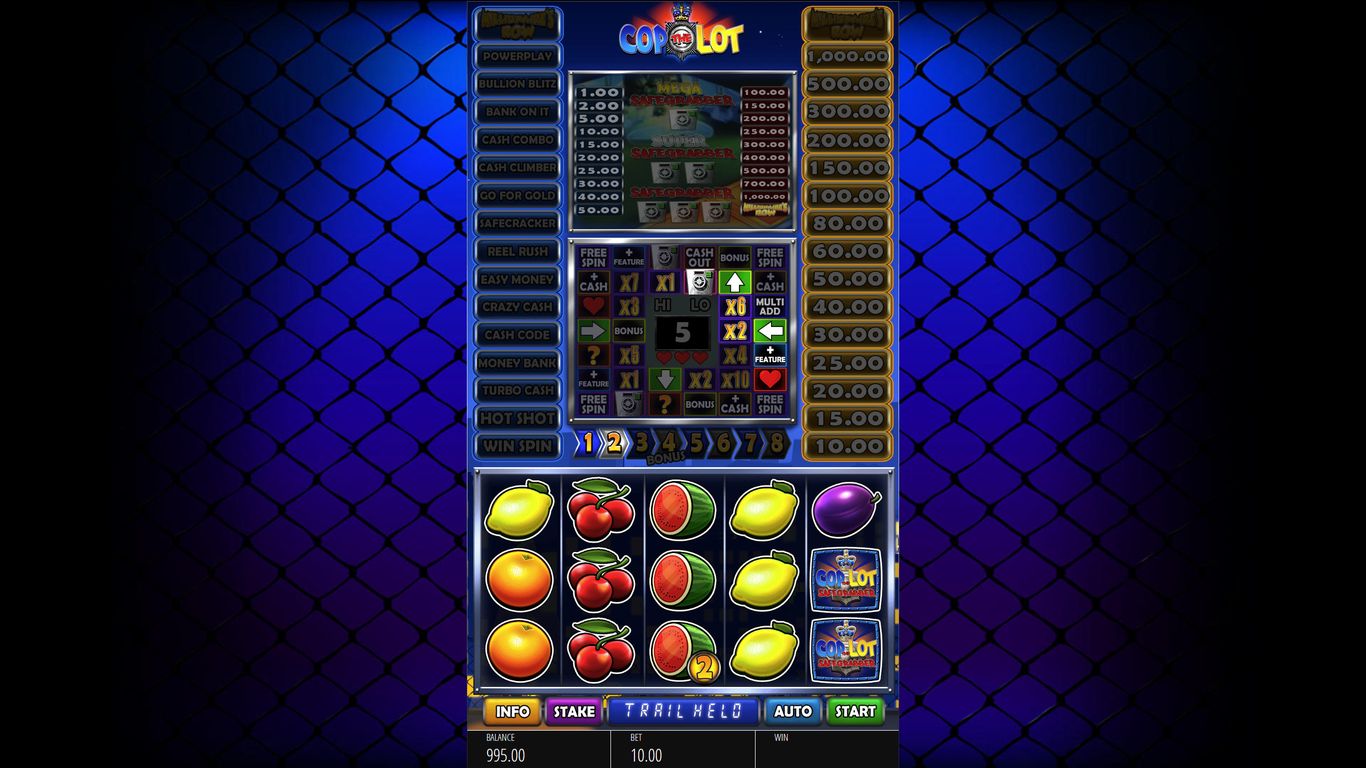 Our Cop the Lot Safegrabber Review

There is so much going on in this game that in the beginning each of our slots experts thought the game confusing. However, upon better look and following a bunch spins, it becomes apparent that everything is automated and there is no way of getting lost in this slot. The only choices that are left to the players are whether to deploy the Hi or Lo option, play for one of the bonuses or claim the pot.

The return to player theoretical outcome of this game has been set at 96.57% and this sits well with most players. There is one percentage point above the average of 95 and then more than half a point further, so that’s a quite decent Cop the Lot Safegrabber RTP.

To play Cop the Lot Safegabber, start right here by claiming a welcome bonus and possibly free spins to one of the casinos on this page.