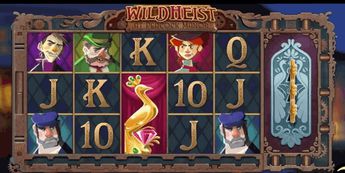 There are plenty of slots with similar storylines, but you won’t find a lot of games that aren’t based on an existing story, like a film or a comic book. For this Thunderkick slot, the designers started from scratch and developed both the characters and the plotline. Thunderkick was established in 2012 and since they have developed a range of high-quality games and Wild Heist at Peacock Manor is one of their top titles.

The main characters in Wild Heist at Peacock Manor slot are four gangsters, and you will see a lot of them on the reels, especially because they’re both standard characters, but can also be wilds. The story is not contemporary though, as all characters look like they’re coming from the olden days, probably before World War II. You will also see the famous, or rather infamous peacock that they’re trying to capture and to the rest of the reels you will see a key, well actually three keys.

The game includes animated features, and pictures of gang when they’re on their conquests are also shown. The music is subtle, but you will notice it and there are peculiar sound effects whenever a winning combination is activated.

How To Play Wild Heist At Peacock Manor Slot

The layout of Wild Heist at Peacock Manor slot is quite simple, the five by three grid assumes the central position and you will notice the buttons below the reels. The game has a standard layout, but there are 17 paylines, which is not quite common. Moreover, you don’t place your wager per payline, but you rather choose your overall stake and there’s no option of deactivating some paylines, all winning combinations are active during every spin.

Next to the auto play button is the coin button and if you click on in the bet menu will be prompted. Here you can choose your next wager, starting at 10p and up to a maximum of £100. As we said above, here you don’t set your wager per payline, and the winnings are also calculated overall. Finally, if you wish to play Wild Heist at Peacock Manor slot in silence, just click on the sound button and toggle the music and all sound effects off.

How To Win Wild Heist At Peacock Manor

You will need at least three symbols across an active payline for a win in Wild Heist at Peacock Manor slot. The symbols have to be arranged from the leftmost towards the rightmost reels, consecutively, which means that you will need to have symbols on the first three reels.

The Peacock is a stacked symbol it appears on three reels, and there is also a stacked wild, walking wilds and random wilds and all of them pay £20 if they form a combination of five symbols across a payline. All wilds can substitute all other symbols, except for the scatter.

The best thing about Wild Heist at Peacock Manor slots are the bonus features. There are plenty of bonus games and other original features.

If you get at least three scatters across the reels you will trigger the free spins bonus. And just before the Wild Heist at Peacock Manor free spins begin, you will get a chance to customise your bonus by picking three cards from a range of offered ones. The cards can award you an additional number of free spins, a multiplier, special wild features or more. If you get an additional scatter symbol during the bonus game, you will get to pick another card and that can be repeated up to five times during free spins. You will need a minimum of two scatters to retrigger the pick feature.

A random mystery bonus feature can be activated in the main game. This feature includes three mystery options.

An unusual and rather unique game, Wild Heist at Peacock Manor slot is also a very favourable game with an RTP of 96.10% and plenty of opportunities for large wins, especially during the bonus features. Available at a range of SlotsWise casinos, this game is a magnet for players who cherish and appreciate originality, and that’s why its popularity isn’t surprising at all.