The game comes with a layout of three rows and five reels that can spin across 25 selectable paylines. Bets begin at one penny per payline, which amounts 25p with the maximum number of lines on. Players can win cash prizes with at least three matching symbols. The maximum payout potential of this game is more than 100,000x multiplied by the bet. 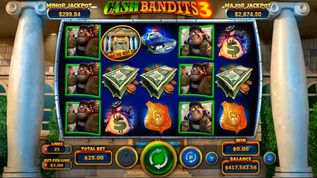 Reeltime Gaming is quick to add another slot in the Cash Bandits series, that is the third one. The game has slights improvements and a couple of twists in the way it looks and feels. Players can discover a reel adventure that has a nice base game and a number of features, including two instant jackpot prizes.

Cash Bandits 3 slot has the best features and because of that it is the best in the series thus far. The game has a wild symbol, stacking wilds, a free spins bonus with multipliers, and lots of animated transitions. Overall, this is a game that's going to end up on the casino rosters and remain there in the time ahead.

In terms of graphic design the game offers a great deal of visual mastery on the part of Reeltime Gaming. The style and finish of the graphics remind of some games that are now ancient by contemporary valuations. Nevertheless, it works, as it brings out the character in the picture symbols, especially the wild symbol.

Cash Bandits 3 comes with few video transitions and bonus features that have moving parts as part of the gameplay, such as picking the number of the safe in the attempt to crack the vault's code. The music in Cash Bandits 3 is equally as pleasing as the features and the base game, and all this makes it a natural pick for many slots players.

How to Play Cash Bandits 3 Slot

Before you make a move for the bank heist it is best to first consider your options and bets. In this regard, the game has two settings: Bet Per Line and Lines. The latter setting lets players choose the number of active paylines, which can stretch between one and 25.

Pressing the minus and plus buttons on Bet Per Line determine the payline stake, which can range between one penny and one pound. The maximum bet is £25.00 per spin, but there are multiple options between the smallest bet and that.

One way to enjoy Cash Bandits 3 slot is by turning on the autoplay option. This enables players to kick back and let the bandits make attempts on the cash on their own. In other words, selecting from the automatic spins presets starts the mode without interruption, unless the player makes it specific by selecting one of the options.

How to Win Cash Bandits 3 Slots

The game can offer an engaging base game experience where payouts are made with three or more symbols of the same kind. The symbols consist of two categories - low and high paying, but they are all picture symbols related to a bank heist, cop cars and doughnuts included.

Most of the symbols on the paytable pay amounts that are decent. For example, a payline of five cash pile symbols pays 8x multiplied by the bet and five police officers pay 80x.

The wild symbol in Cash Bandits 3 slot substitutes for all and comes expanded on full reels. The scatter symbol is the game's logo that besides triggering the bonus game, also pays a cash prize of 50x for five of a kind.

This is one of the better ways how to prepare a free spins bonus. The feature takes you inside a room with six safes, one of which is a huge bank vault. Pressing a number on the keypad tries to locate the corresponding number on the security pin. Getting the safes to unlock reveals free spins and multipliers.

The number of free spins can reach up to 300 and multipliers can also reach huge sums, possibly up to 15x on the wins. The free spins bonus can retrigger because the scatter symbol is present and can land on the reels.

Many players are going to be eager to try the game and take their chances for one of the jackpots or a big win in the bonus feature game. This is possible to do with free credits because RTG have released the game as a free play demo slot.

Cash Bandits has become a trilogy thanks to the latest release, and who knows, it may even get a fourth installment and a fifth. Nevertheless, the series by Realtime Gaming is similar in some respects and quite different in others. The graphic design is definitely similar, which is not a bad thing because RTG has retained the style of drawing and rendering the characters and symbols.

The smallest bet of 25p per spin stays as does the layout of three rows and five reels. On the other hand the maximum win potential of Cash Bandits 2 is smaller - at 25,000x which is potentially a neat pile of cash nevertheless even with the minimum bet.

Then there is the math model, which for the second installment has a high variance, while the third is medium to high which creates a possibility for medium and wins to occur.

Overall, a terrific game and the best one in the Cash Bandit series. The stacked wilds help tremendously in the base game and the extra scatters can extend the free spins bonus where payouts come with a multiplier factored-in.

Discover the Cash Bandits 3 slots by claiming a welcome offer right from this page and play at top-rated online casinos.

The game doesn't come with an instant jackpot prize, however, the maximum payout potential is a little more than 100,000x your bet, which can trigger in the bonus game.

Simply said, yes, definitely! The game has had much improvements in terms of graphic design, but more importantly, the math model enables medium to high variance which many players find preferrable.

There is an absolutely amazing bonus feature that involves choosing the best safe from inside a bank vault, and the possibility of winning up to 300 free spins and win multipliers.