One of the most promising and most entertaining Megaways slot comes by way of Blueprint Gaming and their groupation. This is the Bar-X Safecracker Megaways slot with 117,649 ways to pay on six reels and four plus one rows. The game has a free spins bonus feature, whose number of spins is chosen from the gold vaults. The top payout of 10,000x on the biggest bet of £20.00 leads to the jackpot prize of £200,000.00. 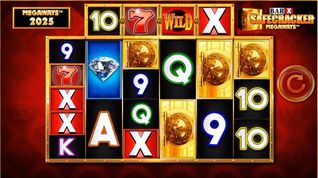 Blueprint Gaming have come up with several megaways slots in a succession. After having released the famed Fishin' Frenzy Megaways slot, the next exciting release is the banking-themed Bar-X Safecracker Megaways slot. The players are going to get what they expect from a title such as this.

There are two symbols depicting themes of luxury and banking: the fist-sized diamond and the golden door of the bank vault. Since this game draws inspiration from the BAR X series, there is the same concept behind the other picture symbol represented by the  X symbol.

The Super Spins Bar X Gold slot and the retro Bar X Magic 7 slot both have the same collection of symbols - the BAR and the X are the most intriguing as these are very simple slots, perhaps with the fewest symbols compared to any other slot game. The difference with the Bar-X Safecracker Megaways slot, besides the megaways action, is that we don't see any 0's on the paytable. In the other two titles of the Bar X series, the zeros are blockers, and result in no winnings. Even if the reel-set is filled with zeros, the slot won't pay a penny.

Thankfully here we have the high cards as the rest of the symbols, so the game has more than just fewer symbols. What is more, this is a megaways slot, which means there are many many ways to pay, which expand and contract depending on the number of symbols or rather, how these appear on the reels. If there are double or triple-sized symbols on a reel, the megaways will increase. So even though there are six reels and four rows, the number of rows isn't static.

One of the more important conclusions for the new players, those who are trying this type of slot for the first time is, everything in the game is automated, so there is no need to worry about missing anything. The slot machine will register every winning outcome and bonus feature. The only thing the players need to figure out is what amount for the bet to choose for each spin.

The 117,649 megaways can lead to a top payout of 10,000 multiplied by the winning bet. Now this is the best possible outcome and because of that, it is very unlikely that it will occur to every other person playing the game. What is more likely is that this will occur to lucky few players around the world every once in a while.

A win of this magnitude will only come on the biggest bet of £20.00 per spin and as a consequence of a series of events on the reels, including consecutive wins on an expanded number of megaways, plus added multipliers, all of which is a logical progression in a sequence of events that will turn up a prize of £200,000.00.

On the other hand, no one has to bet £20.00 per spin to enjoy the game. The players are welcome to bet £0.20 per spin. The same multiplier for the top possible win of 10,000x is also available but the cash prize will be significantly smaller than the £200,000.00. That being said, let's not forget to note that the Bar X Safecracker slot delivers the winnings through the falling/cascading reels type of play. That means, each winning combination of symbols will disappear from the reel-set and make room for a new set of symbols. These subsequent wins could go on for a number of free turns, which is one of the advantages that will be dutifully noted by the lucky players who get this outcome.

The game's bonus features are a great way towards reaching potentially awesome winnings. Besides the thrilling ride that it may conjure up for the player, the free spins bonus can also reward. The golden vault door is the game's scatter symbol. Landing three or more will trigger the Bar X Safecracker free spins bonus. This is where the player gets to choose one of the safes, which will reveal the number of free spins that will be rewarded.

What is more, the cascading falls during the free spins bonus are active. That means, subsequent winnings will count towards the total win and on top of that add a 1x multiplier. So, the greater the number of wins, the bigger the final prize is going to be from the bonus round.

The game has an awesome gameplay that couldn’t have been not optimized for mobile. So here we have a slot fitted for android and apple devices. If your device is up to date and if it can launch your favorite online casino, the Bar X Safecracker Megaways slot. If you don’t have a mobile-friendly casino, check out those on the list as these all are.

This is a game every single slots pro is looking for. The newbies will like it as well because even though it looks a bit nuanced, it is a hell of a thrill to play. As for the winnings, this is very likely a high volatility slot with winnings paid far and in-between, however, with the possibility of a big win occurring out of nowhere.

Play the Bar X Safecracker slot at one of the online casinos on this page. Claim a welcome offer to start your adventure.