Inspired by a cult classic from the 1980s and relying on its timeless characters, the Beetlejuice Megaways slot is a game to behold. Not only is there a marvellous payout potential, but there is also a free spins bonus with multipliers and a reel-set that expands with the progression of wins. Thanks to the expanded rows, the number of possible megaways is 248,832. 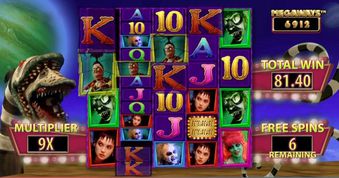 Beetlejuice was a rare comedy horror movie that came to the movie screens in 1988 and became a cult classic among those with a taste for a good laugh. The slots experts at SG Games must have loved it because they were inspired to turn it into a wild adventure on the reels of a megaways slot.

Throughout gameplay which is dynamic and fun-loving, the reels will turn up symbols from the movie, including Michael Keaton's beetlejuice character, Alec Baldwin's Adam Maitland, Winona Ryder's Lydia Deetz and so on. These high-paying symbols can become switched by a wild symbol, as well as the mystery symbol that can sweep multiple symbols into one of the same.

The game offers a colour layout that reminisces art-pop and includes elements of the movie theatre design typical for the 1980s.

In terms of the overall impression with the graphic design, we shouldn't expect too much. Beetlejuice Megaways slot is all about the cascading wins potential, which in a way precludes complex animation.

On the other hand, the dynamic shifting of the rows and exclusion of winning symbols from the reel-set is a treat of adrenaline, especially considering the extended number of rows that can reach up to 12.

How to Play Beetlejuice Megaways Slot

Select your bet and hit the spin button to see some purple smoke that wipes out the top half of the reel-set in an attempt to bring about new symbols and a chance for a cash payout. The reel adventure starts with the Spin button, which you can find to the right of the reels.

Underneath that button is the Total Bet window and the minus and plus buttons that you can use to cycle through the available bet amounts.

The smallest bet in Beetlejuice Megaways slot is only ten pennies per spin, which the maximum bet is 20,00. Regardless of which bet you select, the game will play across the entire six reels and the maximum number of megaways at 248,832.

If you want to engage your megaways adventure hands-free, you are welcome to use the autoplay option by selecting the double arrow circle in the very bottom right corner.

This action will open up the menu where you can choose the number of automatic spins and add the optional stops that let you more control over the balance. You can set a limit on the balance decrease, a single win limit or stop on a bonus feature. When either of these is triggered, the automatic spins will stop.

How to Win Beetlejuice Megaways Slot

The cascading wins mechanism makes it possible for multiple wins to result from the same spin. The winning symbols must start on the leftmost reel and continue uninterrupted towards the right.

The minimum requirement for a winning outcome are three matching symbols and optimal wins are made with six of a kind. The wild symbol, which is the movie's logo, can substitute for any of the symbols, except the bonus and mystery symbols.

When win outcomes have occurred on the top half of the reels, the bottom half will open up to reveal additional rows. SG Digital have called this the Mighty Ways, which is another addition to the Megaways innovation by BTG.

Beetlejuice Megaways slot has high symbols that are represented by the characters in the movie such as Beetlejuice, Adam and Barbara Maitland, Charles, Delie and Lydia Deetz and so on.

The most lucrative symbol in the game brings 50x multiplied by the winning bet for six of the same, while all other symbols bring significantly smaller prizes, which is explained by the cascading wins mechanism.

The bonus feature is triggered by four or more scatter/bonus symbols and these can post anywhere on the reel-set. The free spins feature comes with unlimited multipliers who increase by 1x for each consecutive win.

Regardless of the number of free spins, if the player keeps on getting cascading wins from any one spin, the remaining spins are unused, until the cascading wins stop.

The bonus can get added free spins with the additional bonus symbols. Meanwhile, the mystery symbol is active in the bonus as it is in the base game.

The theoretical return to player value is a great way to tell whether the game stands up to its payout potential. In the case of this game, the RTP of 96.00% represents the industry's average, which is found across most online slots. This value and not anything lower seems to match the game's sheer number of potential megaways, so over a long term play on Beetlejuice Megaways, the game may trigger 100,000 ways to win or more.

Our video review of this game may not contain the same amount of information, but it can provide a valuable look into the way the game plays and feels. The Megaways engine is perfectly grasped by the video inserts and our reviewers have covered information that is crucial about this SG Digital release. Needless to say, those who like the video or the game are welcome to remark in the YouTube comments about the win multipliers, the two-level reel set, the Beetlejuice RTP and more.

The slots experts at SG Digital will have the game available as a free play demo slot following the promotional period. Players can find this Beetlejuice Megaways slot adventure at online casinos that host demo slots.

Luckiest players out there can get up to 6220x for a maximum win or amounts that lead up to that. This figure is multiplied by the winning bet, so we are talking about big cash, with a cap of £250,000.

Discover the Beetlejuice Megaways slot by claiming a welcome offer right from this page and play at top-rated online casinos.

What special features does the Beetlejuice Megaways slot offer?

What is the maximum number of winning combinations?

In Beetlejuice Megaways, the maximum number of winning combinations is 248,832. These win ways are activated when the full grid of the game is active.

Which symbol is the highest-paying one in Beetlejuice Megaways slot?

The highest-paying symbol in this game is the Beetlejuice symbol that pays 5x for 5 on a payline. Also, the game features other premium symbols including Lydia Deetz, Snake, Miss Argentina, and Harry the Hunter.