If you decide to play Volcano Deluxe you will find a reel set composed of four rows and five reels that spin across 20 paylines. The feature that is more striking than anything else is its low to medium variance, which is a rare thing to see nowadays, but it looks like it is making a comeback. The theoretical return to player (RTP) of Volcano Deluxe is 96.00 - right on the average. 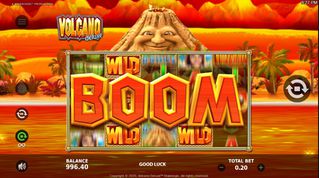 You'd think there is something wrong with there being a volcano that has a warm smile on its face, peeing through calm eyes, but no, this is how StakeLogic has imagined their take on the volcano theme destined for the world of online casinos.

The surviving residents of Pompeii would've found it tasteless and repugnant to have this game in their local bookies, albeit in the form of clay cylinders for reels with terracotta reliefs for symbols, but let's just keep it at ground level, because the Volcano Deluxe slot has a not-too-bad maximum payout of 500x your bet.

In terms of gameplay and features, StakeLogic has furnished the game with a solid base game that can get bombarded with reel modifiers thanks to that chummy volcano. The pinnacle of the features on Volcano Deluxe is the free spins bonus which can trigger a random number of spins. Most players will enjoy the game at hand, we certainly have. Now it is time for a more in-depth take on the winnings and setting up for the gameplay.

StakeLogic has gone for a mixed approach in the making of this game. The symbols are a mixed bag of tropical things such as bongo drums, coconuts and parrots, but there are also tiki masks and a portrait of a Hawaiian beauty. Volcano Deluxe slots comes with some animated features, but nothing too extravagant, as we've seen slots that are visually more pleasing than this.

It could be worth mentioning that the volcano is bubbling near the cone, which creates a tiny visual effect, but the biggest change on the reel set takes place when the volcano erupts and the fireballs strike the reel set. As for the music, it is kind of alright, tolerable to have on while playing but not for too long.

How to Play Volcano Deluxe Slot

To start playing the game players need to first select a wager from the available range, which starts at 20p per spin and ends with a maximum of £100. Any of the available amounts can be selected from two places - either by pressing the minus and plus buttons in the Total Bet setting in the bottom-right corner or selecting the poker chip button on the left side of the reels and selecting a bet from the list.

Once the bet has been selected, the player can press the spin button and have the reels spin one time for each play or deploy the autoplay mode, which means the game can spin the reels on its own. This can be done by pressing the first of the round buttons on the right bottom side to open up the menu.

The autoplay menu on Volcano Deluxe slot holds automatic spins presets that range from 5 to 2500 spins, or to infinity, and there are optional settings such as Loss Limit, Single Win Limit, Stop on Bonus and Turbo Spin. When ready, players need to press the green Start button and the game will be underway in autoplay mode.

How to Win Volcano Deluxe Slots

The remaining symbols don't quite return the bet for wins consisting of three symbols. The cut-off is made by the parrot symbol, whose three of a kind pay 1x.

The wild is the other high-paying symbol which pays the same amounts as the game's logo - 2x, 4x and 25x.

The bonus feature are many, but the major one is the free spins bonus which is triggered by three of those Bonus volcano symbols, which land only on the odd-numbered reels. The number of spins is random, so the game can award between 8 and 20 spins, as well as a random win.

As for the volcano features, these can trigger on any spin as you Volcano Deluxe. These are reel modifiers that cast Random Wilds, Super Wilds which create wild reels, Cash Prizes which are random amounts for the win, and Volcano Spins which is a free spins bonus of between four and 15 spins.

Players can discover the game and all of its features while playing the free play demo slot, which is available at online casinos that host StakeLogic slots in practice play mode.

The low to medium variance is quite rare thus making this game a curiosity. ANother detail that is impossible to ignore are the random modifiers plus there is a free spins bonus, so all in all, it is a game that can trigger some interesting payouts, but the maximum has a ceiling of 500x from a single bet.

Find a real proper casino that has Volcano Deluxe slots right from this page. Make sure you claim the welcome bonus and enjoy the paradise island theme.