Players who decide to play Hyper Burst by Yggdrasil will face a volcanic eruption consisting of colossal tiki masks that can take up a good part of the four-row, six-reel layout. Winning outcomes can occur with three or more symbols across 25 paylines and players can spin the reels for as little as 10p. The theoretical return to player (RTP) of Hyper Burst is 96.02 and the variance is between medium and high 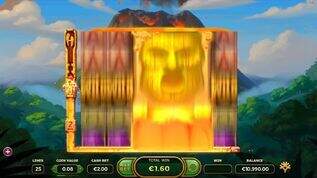 A fierce volcanic eruption of a slot game is always good to consider as an option when choosing your next online slot. The game at hand comes from the already stellar Yggdrasil gaming who are quick to supply one of the few games with the exact theme and subject.

The difference between this and the other slots that smell like pumice, Hyper Burst slot can be as exciting as dashing mad away from the crawling lava and towards the potential winning outcomes.

The game is quite exciting thanks to the dynamic hit frequency. Despite its medium to high variance math model, players are not going to face a drought of winning outcomes. The base game is definitely fun to play, but there are extra features on Hyper Burst too.

The game is called that because of something in it called Hyper Mode where players can get extra features such as multipliers. Overall, this is an exciting new online slot to play and one that players should check out.

Yggdrasil Gaming has tapped the fierce South-East Asian volcanic region for inspiration for Hyper Burst. The result is an amazing manifestation of suspense and drama.

The animated bits and pieces and the visual effects contribute to that in a gripping manner. We've enjoyed playing on Hyper Burst slots and will probably continue to do so, unless another release on the theme beats the game across the board.

At any rate, the game has it all, including a musical theme that is very much in tune with the reel adventure. Any player is going to find the whole package entertaining and to disc

How to Play Hyper Burst Slot

The lava can start overflowing from the cone at any moment so players better be prepared with a fitting wager and a trigger-happy pointer on the Spin button.

Regarding the bets, Hyper Burst slot has a wide range that begins at a coin value of one penny per payline and 10p for the smallest wager. The maximum that players can bet against the 'house' is £100 per spin.

The bottom area of the screen has all of the windows and controls that are necessary to monitor how your balance is doing, the amount of the latest win, the active cash bet and so on. To spin the reels press the half-arrow button, which prompts Hyper Burst to deduct the active bet amount one time for each spin.

Another way to play Hyper Burst is by deploying autoplay mode. Pressing on the circular button that is to the right of the spin button opens up a menu with settings and presets for the number of automatic spins. Once ready press play and the game is underway spinning the reels on its own until you tell it to stop or until the selected prompt is flicked on.

How to Win Hyper Burst Slots

Winning outcomes in the game are made with three matching symbols, but to say this is an understatement because there is so much going on the reel set. As you play Hyper Burst you are going to encounter both low and high-paying symbols and a wild symbol.

The most valuable symbol is the fiercest of the tiki masks, or totem masks, however you please to see it, which pays 8x your bet. The royal cards pay amounts that are significantly lower - 2x for five aces and many combinations below the 1x bet return.

However, in view of the above, Hyper Burst slot comes with a set of extra features.

The wild symbol is easily recognized on the screen and the most most lucrative payout if it lands on six positions on a payline, with 100x your bet.

Players who are lucky to reach the last stage of the Respin mode will get a 4x4 symbol in pair with multipliers, which can rise in number if there are subsequent winning outcomes. The biggest multiplier is 10x and comes following several wins.

Players aren’t going to get a classical free spins bonus but in our opinion this is even better.

The game is available as a free play demo slot at online casinos that host slots in practice play mode. Our casino reviews have plenty of new online casinos with slots for demo play, among which you may find the game at hand.

One of the best renditions of the volcano theme, for the players’ enjoyment. Surprises abound and a max win potential of 12,800x can spin the game into its bonus feature frenzy.

Start your Hyper Burst slots adventure right from this page, when  you claim one of the welcome bonuses.