What if you had the chance to travel the galaxy and experience a world we know so little about? Join the mysterious trooper and explore the cosmic space’s beauty in the Cosmic Voyager slot by Thunderkick. Packed with amazing graphics, animations and sound effects, this slot game has all it takes to show you a different perspective of what’s beyond our power and knowledge. Find out the meaning behind this voyage in our detailed slot review. 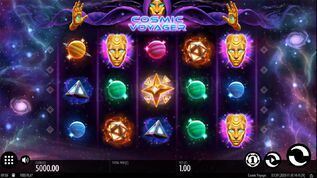 Thunderkick has decided to release a slot game that is a mix of a few different themes. With a bit of mystery, sci-fi, futuristic and alien vibes to it, surely make a great addition to the portfolio of space-themed slots. The Cosmic Voyager slot comes with expanding symbols where all reels can contain matching symbols. The process of forming wins is pretty standard. You need to land at least 3 low-value symbols, or at least 2 higher value symbols to get a win. Now, let’s explore the setup and potential payout mechanics.

Some may have lost their hearts to a starship trooper, but here, we’re about to wander with a godlike character that seems like it’s made of golden cosmic dust. Before we continue sounding like we’re hypnotised, let’s clarify that Cosmic Voyager slot’s action takes place on a 5x3 grid with 10 active paylines. The action revolves around the expanding symbols which have the ability to fill the whole grid. In the best-case scenario, you’ll win a reasonably fair price capped at 5,000x your bet per spin.

The Cosmic Voyager slot is playable with betting options that range from £0.10 and £100 per spin. This means there are plenty of in-between options between the two ends so that you can feel more comfortable during gameplay. Looking at the bonus features of this game, we find the standard Free Spins and the expanding symbols. The best thing about the expanding symbols feature is that any symbol can expand and cover its respective reel. More precisely, any winning symbols landed on the remaining 4 reels can expand to cover their respective reel. At most, you can win 2,500x your bet for a full screen of the top-paid symbol.

As we mentioned previously, the Cosmic Voyager slot is based around the concept of deep, magical but at the same time, mysterious space and galaxies. You’ll meet the Voyager that wears a golden mask with bright blue eyes shining through them. His arms are widespread around the reels as if he controls the pace of the gameplay. The design is vivid and intense, while the stars and cosmic dust make the atmosphere even more dreamy and surreal.

Symbols on the reels include low-value planets coloured in purple, blue, green, pink and orange. The green cube, blue pyramid and orange icosahedron are the medium value symbols that add the mystic, ancient Egypt feels of the design. The mid symbols pay in the range of 20-30x your bet if you land two or more of a kind. The golden Voyager mask is the symbol of the highest value, paying a maximum of 250x your bet for 5 of a kind. The Cosmic Voyager symbol is both the scatter and wild symbol, serving as a substitute for all symbols in the base and bonus round.

The RTP (Return to Player) percentage of the Cosmic Voyager slot is 96.1%. That is pretty much the norm for all Thunderkick slots and the average compared to other releases. On the other hand, the game’s variance is high, meaning that big wins will be hard to come by, but when they do, they’ll be hefty. The maximum win for this slot game is capped at 5,000x your bet per spin, which is pretty decent looking at the game’s standard bonus features and mechanics. If you want to learn more about different volatility models in slot games, check out our Variance, Volatility and RTP guide.

When it comes to Thunderkick’s online slots, we’re used to testing games rich in bonus features and animations. The bonus action in Cosmic Voyager remains relatively straightforward. The key component is the expanding symbol mechanic available both in the base game and in the free spins round, bringing a little twist. Let’s see how these features work:

This feature is triggered once when 3 stacked symbols land on the first reel. If the same symbol appears on the other reels and is part of a winning combination expands to cover the respective reel. You can win up to 2,500x your bet in this round if you manage to land a full screen of the golden mask, the top-paying symbol in the game.

This feature is triggered by at least 3 Cosmic Voyager symbols. As we said previously, this symbol acts as both a wild, and a scatter. You’ll win 10 free spins and a payout of maximum 200x your bet for 5 symbols. If you’re lucky enough to land 3 or more Cosmic Voyager symbols during the free spins, you’ll add 10 more free spins to your total. There are no limits regarding retriggering this feature. You need at least one mid or high-value symbol to cover the first reel during the free spins round. It’s worth mentioning though that the Cosmic Voyager symbol does not expand its form. This further activates the Expanding Symbols feature, but with a more rewarding power. Therefore, the maximum win cap is doubled, reaching out an impressive 5,000x your bet.

The Cosmic Voyager slot has been developed with HTML5, which means that it can be played on mobile, tablet and desktop devices as standard. The simple 5x3 layout and sharp graphics and visuals are displayed nicely on a smaller screen. We recommend you flip your device to landscape mode, as you’ll have a better visual presentation of the reels. The quality of the design and graphics is clean, sharp and work well with the overall atmosphere.

This developer comes from Sweden, and always manages to deliver top-quality slots in terms of graphics and creative input. One of the features by which this developer is recognised is that it creates sequels of their titles, giving them a proper background and storytelling elements. Their recent adventure-themed release called Crystal Quest: Arcane Tower is a successful sequel to the Crystal Quest series that offered innovative tumbling reel mechanics. Next, their Jin Chans Pond of Riches slot is a homage to the Chinese dynasty of fortune, fame and wealth. Finally, check out their Beat the Beast sequel called Beat the Beast: Griffin’s Gold. Are you wondering how much is this gold worth at? Well, it stands at impressive 22,222x your bet. Worth trying your luck, right?

The Cosmic Voyager slot managed to live up to its title, providing us with a galaxy-themed atmosphere and reel action. The inspiration for it probably comes from games similar to Netent’s Starburst, and slots with Egyptian-themed features. When it comes to the main expanding symbol mechanic, we find this slot game very appealing, as any symbol can be transformed into an expanding one. Overall, it’s well designed, simple but a quality game that offers a fresh concept to the popular space-themed slots. If you are a fan of sci-fi and space themed, try spinning the reels of Cosmic Voyager slot. Good luck and remember to play responsibly.

Discover the Cosmic Voyager slot by claiming a welcome offer right from this page and play at top-rated online casinos.