Here comes the second instalment in Crystal Quest sequel by Thunderkick, called Crystal Quest: Arcane Tower. This time we’ll climb the steep mountains to search for a mysterious place in hope to find precious gems and immense fortune. Join Gemma in this expedition and let us guide you through the features and gameplay in this in-depth slot review. 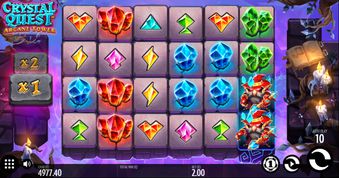 The Crystal Quest: Arcane Tower slot is a follow-up Thunderkick title that aims to repeat the success of its predecessor Crystal Quest: Deep Jungle. When it comes to Thunderkick’s output over the last couple of years, they’ve established as an innovative studio, following its own style and game narrative. This slot game takes place on a 6x4 tumbling blocks grid, with 4,096 ways to line up a winning combination of a maximum 15,000x your bet. Sounds like a potential favourite? Let’s see what else this slot game has to offer.

This slot game is built around a fantasy theme, as the brave adventurist Gemma aims to collect the crystals from a place called Arcane Tower. Here’s a little trivia for you - the word “Arcane” means something secretive, mysterious and unknown for the world outside. As symbols drop or blast on each spin, you’ll notice the bright spooky tower in the distance. Give this slot game a spin, and you’ll get a better view of this magical place. As we mentioned previously, this game has 6 tumbling reels and provides 4096 ways to land a win. You can adjust your bet in the range of £0.10 up to £100/spin. Leaving behind the traditional payline format, this game creates combinations by landing symbols on adjacent reels. The special features of the Crystal Quest: Arcane Tower slot include cascading symbols with rising multipliers, free spins round and linked reels. The solid math model offers a potential win of 15,000x your stake.

The Crystal Quest: Arcane Tower brings up the magic, fantasy and mystery on the reels. The design and graphics are of excellent quality, but nothing extravagant or different from the previous Crystal Quest title. Some old books, candles and trees add up to the atmosphere accompanied by the rich, powerful and resonant background music.

These reels represent the home of the mighty Wizard that has power over the precious gems. At the same time, the Wizard symbol is the highest paying symbol in this slot game, winning 20x your bet for 6 of a kind. You’ll also notice the Crystal Warrior as a high-paying symbol on the reels, while crystals in red, pink, blue, green, orange and yellow represent the low-value symbols.

Look out for the W letter, as it represents a wild symbol that substitutes regular symbols to form wins. The scatter symbol is a treasure chest, and if you manage to collect 3 of them, you’ll unlock the free spins round.

This fantasy reel action comes with an RTP of 96,17%, which is slightly above the average ratio. The volatility in Crystal Quest: Arcane Tower is high, meaning that you should expect less frequent, but bigger winnings. As we’ve put this slot game to the test, we’ve noticed that bigger wins come from the multipliers feature. If you want to learn more about different volatility and RTP slot models, check out our thorough guide about Variance, Volatility and RTP in online slots.

Thunderkick surely wasn’t modest when it was incorporating the features for Crystal Quest: Arcane Tower slot. To be more precise, you have 5 available features at your disposal. Along with multipliers and avalanches in the base game, you can trigger the Free Spins, Wild Explosion and Linked Reels feature. Let’s go through the features and see how they work:

This is a randomly triggered bonus feature that can appear during any spin in the base game. When you activate the feature, up to 6 reels are linked, meaning that they will spin and land with the same symbols on during gameplay. Have on mind though that this feature is not triggered during the Avalanche sequence and can only trigger before a new spin.

When there are no winning combinations on the reels, all wild symbols on the reels explode, removing the symbols both horizontally and vertically. For example, if you have a wild symbol at the top of reel 1, the top reel and row 1 will explode so that new symbols can land.

As we mentioned previously, 3 or more treasure chest symbols will trigger the Free Spins round, giving you 12 free spins to start with. If you manage to land two or more additional Scatters, the first two will reward you 3 extra free spins, while every additional Scatter adds 2 extra free spins to the board. There’s no limit on how many times you can retrigger free spins, and most importantly-the progressive multiplier does not reset after a non-winning spin. Quite impressive, we must say.

When it comes to all Thunderkick releases, they can all be played on mobile, tablet or desktop devices. The same goes for Crystal Quest: Arcane tower slot. The 6x4 layout perfectly lands on both bigger and smaller screens, while keeping the same quality in terms of resolution and interface.

It seems that Thunderkick’s favourite subject and source of inspiration is the world of fantasy and fiction. Check out their Pink Elephants 2 release, and you’ll agree that even though this isn’t their newest release on the market, it has quickly become an evergreen slot story. In the last period, the developers’ focus was set on the Beat the Beast series. We don’t know which one to choose as our favourite, but make sure to look at Kraken’s Lair, Mighty Sphinx and Cerberus Inferno releases. With those title formations, even the Hollywood scenarist would envy the copywriting skills.

Crystal Quest: Arcane Tower offers 5 bonus features in total, which makes it a potential hit in the gaming community. Even though the developer copied some of the elements from Crystal Quest: Deep Jungle, we find this version as more appealing, entertaining and close to Thunderkick’s identity. Graphics are vibrant and well animated and expect a seamless gaming experience, both on desktop and mobile devices. Being a highly volatile slot game, make sure to set up your bets accordingly, so you can be comfortable and play responsibly. All in all, we enjoyed the testing process and would recommend giving this game a chance.