Pink Elephants is a Thunderkick slot based on the famous Disney animated movie Dumbo. The game has a non-standard layout with six reels and four rows and the total number of paylines is 4096. The maximum amount you can win in Pink Elephants is 8.200 times your bet per line. 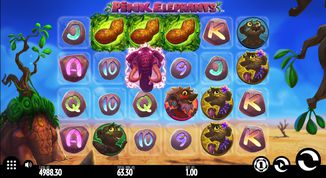 This game features elephants and other extraordinary creatures that appeared to Dumbo, during his visions as presented in the 1941 animated film Dumbo. All these pink creatures can be seen dancing, singing and playing instruments as part of a marching band. Pink Elephants slot is a quirky game, released by the Stockholm based casino game developer Thunderkick. It is probably the first online video slot based on these animated creatures, playable across all devices, where you are taken on a quest through the desert to find the Magic Peanut.

The setting of Thunderkick’s Pink Elephants is in a fantasy desert in a dream-like pink dimension. It has a great visual design with strange a looking desert and trees that just add to the special feel of the game. As mentioned above, the theme of the video slot is based on Dumbo’s visions of pink Elephants from the Disney film where he is the protagonist. This video slot features six-reel slot, four rows, and a total of 4096 pay lines with winning combinations formed by matching symbols across adjacent reels from the leftmost reel to the rightmost.

Pink Elephants slot includes a wide assortment of symbols on its reels. Its low-value symbols include the standard 9, 10, J, Q, K, and A, in ascending order, while the high-value symbols include rodent-like creatures in different colours – blue, green, yellow, and pink – and an angry-looking pink elephant as the highest value symbol. The game’s Wild symbol is a glowing purple “W” set against a pink background. The Wild symbol substitutes for any other symbol except for the scatter symbols. The game’s Scatter symbol is the sought-after peanut set against a vortex-like green background, and there is an additional Mystery Scatter symbol, also a peanut, but in a neon green colour.

We’ve already mentioned what the game is based on – the famous Disney film Dumbo, but let’s expand on that a bit. There are quite a few online slots that are based on animated films and films in general. These are some of the most popular film-based slots.

Wizard Of Oz – This WMS Gaming slot is another example of an exciting online slot based on an iconic film. Wizard of Oz slot features 30 paylines, across a set of five reels and three rows. The minimum bet on Wizard of Oz is 30p, which is a single penny per payline. The game RTP is 95.99%.

Jurassic Park – Another film that really doesn’t need introducing. This is a Microgaming title and that fact alone speaks volumes. In case you’re not familiar with the name Jurassic Park, this is one of the leading online slots developers, alongside Playtech and NetEnt. Jurassic Park slot features five reels and 243 paylines.

Superman – This is Cryptologic title and this provider have developed and released few more games based on popular films. Superman slot features 50 paylines and it can be played with a minimum of 50p. The game comes with two bonus features – Save the World and the standard Free Spins game.

Pink Elephants differs from the other three games we listed here in few aspects. Firstly, Pink Elephants is based on a particular segment of an animated film, namely the point in Dumbo where Dumbo starts seeing pink elephants. Also, this game comes with a six-reels, four-rows format, which is not very common, as most slots have a five-reel, three-row layout.

We have here an exceptional slot design that feels like a story penned by a master wordsmith. The premise is, there is a band of friends who have embarked on their pilgrimage to discover the land of the Pink Elephants. To get there, this gang of mongooses is collecting the glowing magical peanuts which are the Scatter symbol and are responsible for the free spins. Then there is a mystery scatter that can be triggered at random in any spin of the main game. This glowing green peanut increases the chance for winning the bonus game.

During the bonus game you fill the flowers with the orbs which come as result of the elephant symbol. Once you fill a flower it will transform into an elephant and provide one free spin. The rest of the game's symbols are the mongooses which are all their own characters and the rest of the symbols are the cards numbers and faces that go from nine to ace.

Of course, if you like just to spin the reels and see what happens and disregard the design and what it looks like you can do that too.

How To Play Pink Elephants Slot

The game also offers an Autoplay feature which can be entered by clicking on the Auto play button – round button with “>” on it – on the left of the “Spin” button. When pressed, a new window opens giving an overview of 10 available numbers of game rounds to be played automatically. After selecting the desired number of rounds, the game takes you to the main screen where you can either start the Autoplay feature by clicking “Spin” or make changes in your bet and the click “Spin”. The number of remaining rounds is displayed above the “Spin” button. You can stop the Autoplay round by pressing “Stop”. 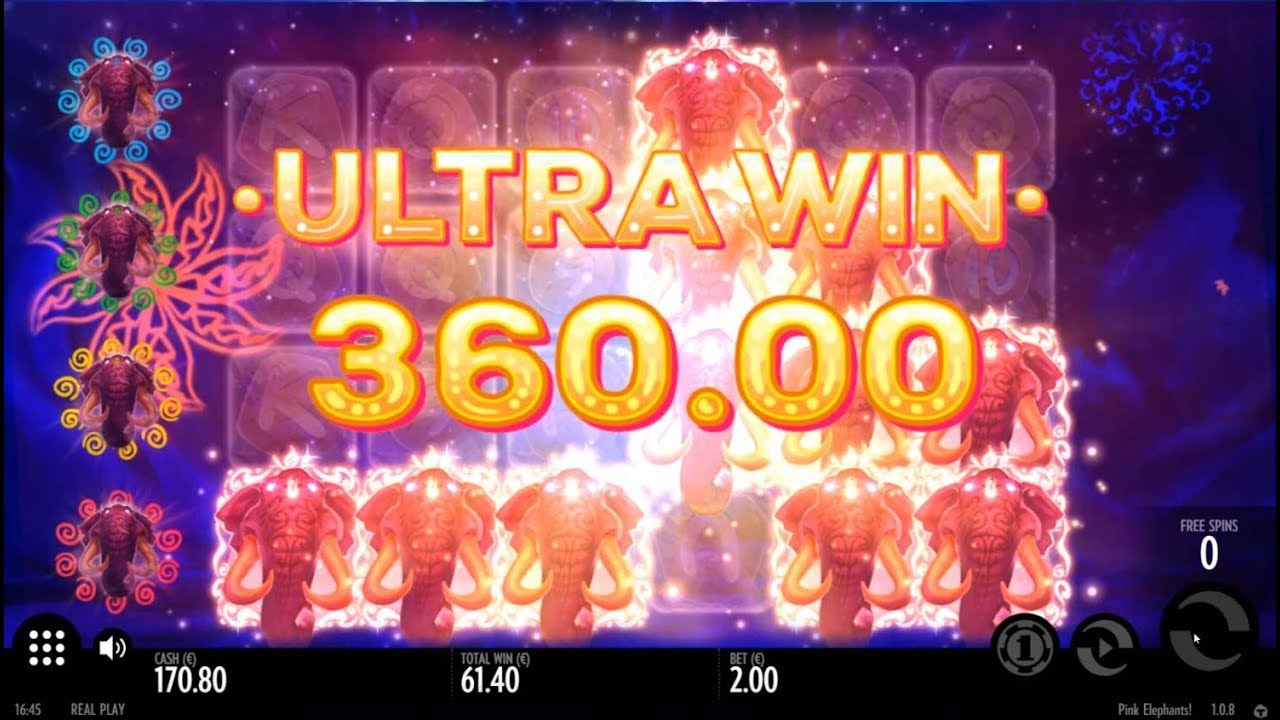 How to Win Pink Elephants

To win Pink Elephants slots, you need to land certain winning combinations of consecutive symbols positioned left to right starting on reel 1. As mentioned, it offers 4096 pay ways and all unique combinations pay. All winning payouts are dependent on which symbols are landed, low-value or high-value – and of course how many. The values of all low-value and high-value symbols, as well as some of the winning combinations, are presented in the pay table which can be accessed by pressing the button with 9 dots on it at the bottom left-hand side of the screen and then pressing the button with a trophy on it.

Not all paylines will be displayed as there are many of them, but you’ll get a sense of how winning combinations are formed and what you can generally expect when playing Pink Elephants slot.

The Pink Elephants Bonus feature is activated by landing three or more Peanut scatter symbols anywhere on the reels. Depending on the number of landed scatter symbols, the slot will offer a certain number of free spins. Landing 3 scatters will get you 7 spins, landing 4 will award 11 spins, for 5 scatters you will be awarded 15 free spins, and 6 scatters will get you 19 free spins. This feature can be re-triggered during one of the free spins and will award you free spins depending on the scatters you land.

Another feature during the bonus round are the 4 rodent-like symbols with all four of them having meter bars on them. Orbs that land during the free spins round will fill these meters and if a meter gets filled, then that symbol will turn into pink elephant for the entire duration of the spins. Also, every meter that gets filled will win you an extra spin.

The second scatter that was mentioned above in the text is the Mystery Scatter symbol – a neon green peanut – that can appear randomly during the base game. Landing between 1 and 5 Mystery symbols increase your chances of triggering the Bonus feature.

Choosing to play the demo version is a good strategy to get familiar with the game, to see how the game’s elements and options work, to see the scatter and bonus symbols, and to see how the game’s bonus features are triggered and how much they award. Once you have familiarized yourself with the game and gained enough experience, you can move on to the real money version of Pink Elephants slot. 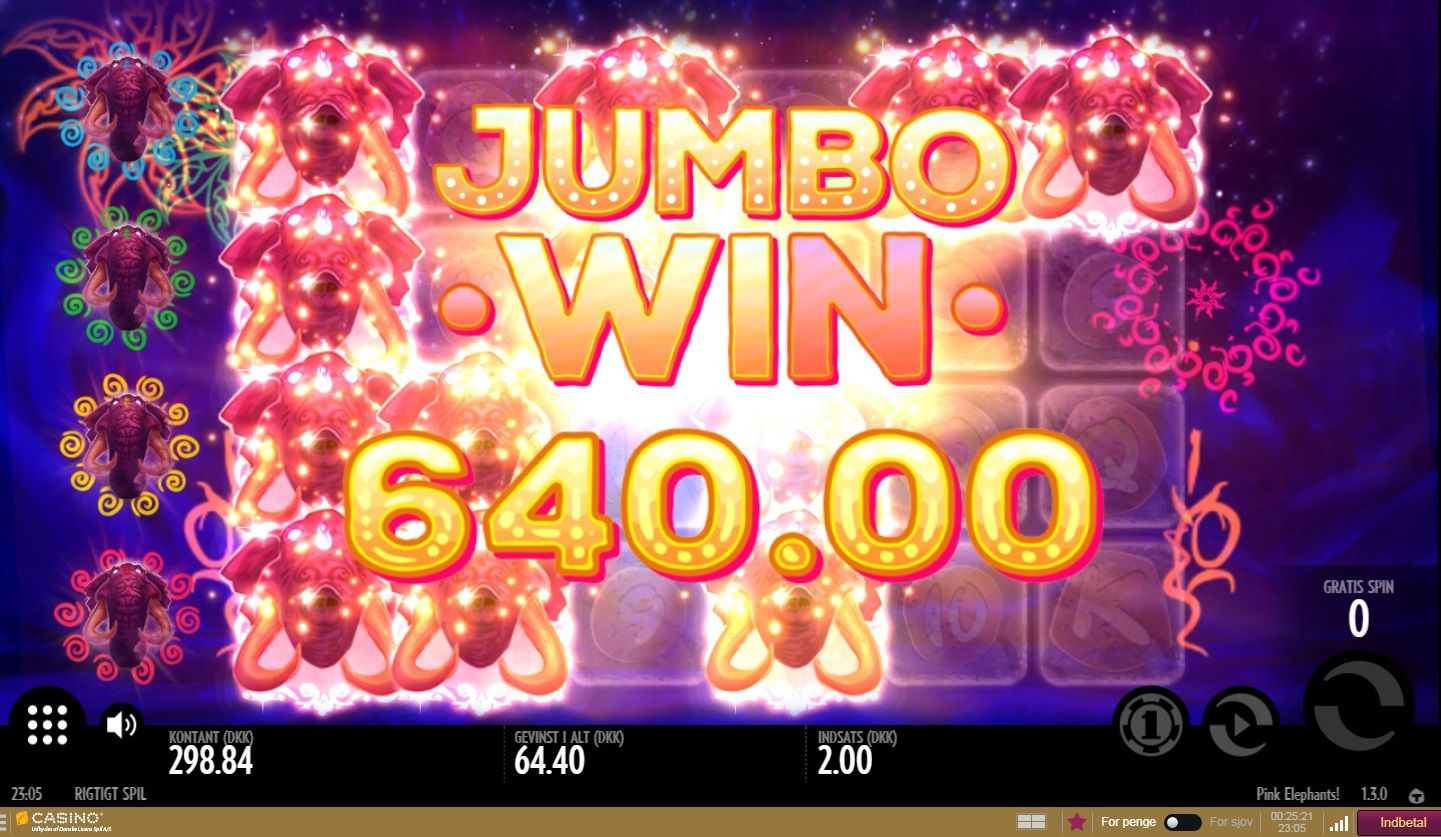 The game’s return to player is another positive feature of Pink Elephants slot. It has become somewhat usual for games that are abundant in bonus features and that have been made to project an unforgettable gaming experience, to have a lower than the average RTP. Not the case with the Pink Elephants RTP. This game has a theoretical payout outcome probability of 96.10% which is above what we consider average.

In case you are not familiar with the concept of RTP and how it works – this is the theoretical return rate of the game, i.e. the percentage of wagers that the game returns as winnings. This percentage is set by the game provider and is tested before and after the release. The RTP is calculated long-term, it doesn’t mean that it will be reflected in the single gaming session.

If you’re looking to play slot games in general and Pink Elephants in particular on your smartphone or tablet, then we have some good news for you – this is a mobile-friendly game and it can be played on a variety of devices, across a range of platforms. So, it doesn’t matter whether you have an iPhone or an Android, you can play Pink Elephants as long as your internet connection is stable.

Pink Elephants slots is a well-designed high-quality game that is very simple and straightforward to play. Its 4096 pay ways give a lot of possibilities, but the Bonus Features is what the game is all about. During the free spins you get the symbol transformation where the lower value symbols are transformed into the highest value Pink Elephant symbols for bigger win. You can win up to 8.200x your stake per payline.

If you like to play this Thunderkick masterpiece, register with one of the casinos featured here and you can start right away!