Players who go for this prairie-bound adventure will discover a layout of four rows and five reels that spin across 40 paylines. To play Buffalo Hunter you need to bet 20p at the least and the game can make winning outcomes with three or more symbols. The theoretical return to player (RTP) of Buffalo Hunter is 96.34% and players will discover an engaging math model that is set to the highest level, so that few lucky players may get close to the maximum payout of 12,647x 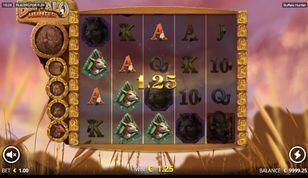 Buffalos were magnificent animals. They roamed the prairies of the North American expanse and were sacred to the native peoples. Surely enough this animal is impressive enough so that it provides the central theme to so many online slots, such as the famed Buffalo Blitz II slot and the original game also. The main reason why we are paying attention to the Buffalo Hunter slot is because it comes from Nolimit City who have rose to fame with games such as Money Train 2 slot and Money Train.

In terms of gameplay, the layout has many common elements with the Money Train slots because they all share four rows and five reels. Perhaps this is a Nolimit City thing, but we know that it definitely works for their style of providing for a reel adventure. Overall, this is a game that not too many players can stomach. The reason is the variance, which is likely to trigger many small payouts until you reach the bonus feature, where its potential can generate few surprises.

In terms of graphic design the game can offer a lot of good times. It isn't that the symbols are overly animated and provide a top-notch visual effect, but the overall experience is positively engaging because of the fast dynamic. The art on the reel set is pretty good, but you can't really experience how well the symbols have been drawn and rendered because the 4x5 layout makes them smaller than the usual.

Buffalo Hunter slots shows the best of its gameplay during the free spins bonus. This is where the payouts are marked in magical lightning and the symbols are surrounded by a flaming garland that ebbs and flows on the wind. The musical theme is equally engaging as it captures the emptiness of the American prairie while filling the ambiance with a pretty melody. Overall, if you play Buffalo Hunter it is best that you enjoy the game by playing more than just few spins.

How to Play Buffalo Hunter Slot

Players can start enjoying this buffalo-exploration tour by selecting any of the available bets. The dollar sign opens up to a list of amounts that range between 20p to £100.00 per spin. Any of these amounts enables the game to spin across its full 40 paylines.

To start the reels press the big square button that has a half-arrow in it. Players who are familiar with Nolimit City games will have an easy time around the buttons and controls, which are quite intuitive and hard to miss. Below the spin button are another two that have a gameplay function - speedy spins and autoplay.

The autoplay mode is probably the best way to play Buffalo Hunter slot. When you press the button a menu opens up were you can select from the number of rounds presets and add the optional Sing Win limit, balance drop limit and balance gain. Once ready, the press on the automatic spins preset that you like to deploy and the game goes underway in a hands-free reel adventure.

How to Win Buffalo Hunter Slots

Winning outcomes are made as per the usual. Three matching symbols need to land on any of the 40 paylines, however, with that many paylines comes the possibility of landing multiple winning outcomes. Another detail that helps towards multiline winnings is the fact that the buffalo symbol can post stacked on full reels, sometimes covering two reels or more.

When it comes to the payouts, the high-paying category of symbols has a range of prizes that is quite decent if the symbol combinations include four and five matching symbols. The buffalo symbol is the most lucrative, as it pays 50x multiplied by the bet for five of a kind. There is another symbols that we'd like to see land five on a payline - the wild - which is represented by a dreamcatcher and which pays 50x your bet also.

The game has a bonus feature that can turn into stamepede of winning outcomes, if the random number generator plays your cards right. To trigger one of the two features you need to get three or four scatter symbols. The features are different even though both involve free spins, but the player can choose either one.

Buffalo Horde comes is a symbol-upgrade bonus that unfolds across the eight or ten free spins. The buffalo symbols are collected in the meters on the left and when each symbol has received five buffalos, to which two extra spins are added.

Prairie Multipliers is the second bonus that is up for selection but instead of symbol upgrades, the buffalos add a multiplier to each animal. You need five buffalo symbols to up the respective multiplier. For each multiplier upgrade, the player gets two extra spins.

Either of the two free spins bonuses are very volatile which means players can land potentially huge winnings or the opposite. It seems like there is no middle ground. This is the reason why it is a huge gamble to buy the bonus feature and pay either 100x your bet or an exorbitant 600x for the five-scatter bonus which is also known as Stampete Super Bonus.

The latter comes with 12 spins during which five buffalo symbols increase the multiplier amount and upgrades the symbols and adds two extra spins for each upgrade. If 25 buffalo symbols land on the reels during this free spins mode, if there are remaining spins, they will have all symbols upgraded to the buffalo and the multipliers will have a neat 5x your win factored in for every winning outcome.

Nolimit City are champions in offering their online slots in free play demo slot mode. This enables players to experience the gameplay and to have a reel adventure with free credits, which is limiting as the payouts are not made in real cash.

Overall an interesting game to consider, however, players who like Nolimit City slots will be reluctant to forgo either one of the Money Train and/or Deadwood slots.

Discover the Buffalo Hunter slots by claiming a welcome offer right from this page and play at top-rated online casinos.