Experience the thrill of sitting in at a tea party with Alice and her friend, the Mad Hatter. The game called Alice and the Mad Tea Party slot will take you to that adventure. You will discover five reels, three rows and 30 paylines all in an effort to capture the base-game prizes, as well as the bonus feature free spins. The game delivers multipliers of up to 10x when the players gather as many cupcakes as possible. 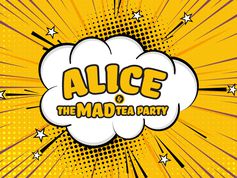 If you are willing to take some tea with the Mad Hatter, then join the Alice And The Mad Tea Party slot for a chance to play three bonus games and potentially land neat winnings.

While Alice is relaxing on top of the reel set, on a perfect autumn afternoon, the reels are spinning because they are part of a mad tea party. On them you are going to find some characters that are awfully familiar - and that is because each one comes from Lewis Carroll's famed story Alice in Wonderland. While this is not the only slot that has been inspired by the book (as well as the animated film and all the movies), it is one of the few made that are quite decent.

All of the action is taking place on three rows and five reels, with a rather large area for the controls and plenty of room for the sunshine coming down from between the tree crowns. The game entertains with some amusing potential for winnings and bonus features with the Feature symbol and the Wild. Overall, this is a decent game made by the renowned slots makers at Williams, however, there isn’t much in terms of the graphics that may astound you. On the other hand, the Alice and the Mad Tea Party RTP at 96.03% is above average and welcomes everyone to play.

How To Play Alice And The Mad Tea Party Slot

With a controls board that looks like it's been taken from a land-based casino gaming cabinet. There is a row of buttons that have the amount of the wager already set, so the players can shift between smaller and bigger plays on the spin by merely lifting a finger.

The smallest wager on this meter is £0.50 with £1.00 the next one over and £1.50 and so on. The biggest wager available is £100, however, there are many other options for the wager amount in-between the low and high limits.

The 'Spin' button is located in the bottom right corner and to the left of it is a window that displays the latest win and other information about your gameplay. On the other side of the control panel are two buttons - the first from the left pulls up the paytable and the one next to it is the Autospin button.

The paytable is that place that acts as the fuse-board. It lets you know about the amount of the pays, the bonus features, the paylines and few other piece of information that you may find useful

The game has some design features that make it stand apart from others and that is due to the unusual arrangement on the playing surface. One wonders, why so much room has been left for nothing - well, the bonus features - those Pick Me games explain why and we welcome that nevertheless.

As for the symbols, the order of lower-valued symbols is comprised of the cards suits, shaped like crystals and gems and in different colors. The picture symbols are Alice in wording, Alice holding a teacup, the Mad Hatter, the bunny with the trumpet, the Drink Me potion, the cake and a tea set. The two specialty symbols are Wild and Feature.

How To Win Alice And The Mad Tea Party Slots

There is a Pick Me bonus game that occurs when you land three of the Alice symbols on the reels. In it you get select from three teapots that fall right on top of the reel set - and that explains why there is so much room left on top of the place where all the action has to take place. The Alice symbol becomes sticky and the Pick Me bonus lets you pick from another pot if another Alice symbol has landed on the reels again. In the same manner, as long as the same feature symbol continues to land on the reels, the game could end up covering the entire grid with the bonus symbol, or until the teapot reveals the END, in which case the game stops.

Whenever three of the Mad Hatter symbols land anywhere on the reels, he will jump out of hiding and step onto the top of the reel-set. This is a sign that you have triggered the bonus feature - another Pick Me gig in which you select from an array of different teacups. You can keep guessing the cup without any cash in it, which will cause it to become moved on the tray. If you strike a cup with a cash prize attached to it, the game stops and you get what you get. Thus plays Alice and the Mad Tea Party slot.

If you are ready for the potentially winning brew, you can start by selecting a casino from this page and claiming the welcome bonus that takes you there.