The players can discover a reel set of six reels and six rows that spin across 50 fixed paylines. This game comes with few surprises and extras, but the basics are well-known to the players: wins are made with three or more matching symbols and there is a wild symbol as a substitute. The smallest bet in the game is £0.18 per spin and the theoretical return to player is 96.18%. 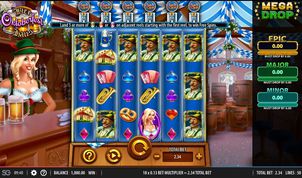 Williams are working up a mood for beer lovers and those who generally relish in the thought of sitting on long tables and clinging pints with friendly strangers on Oktoberfest. The world capital of beer in this month of the year is the region of Bavaria, but those who can't make it there may still feel the thrill of dancing to polka music on the Bier Haus Oktoberfest slot.

It is worth to note that this is one of the several games that have the same theme, all released by Williams (WMS) and Scientific Games Digital. Bier Haus Oktoberfest comes with an exciting base game that can trigger winnings of up to 1388x multiplied by the winning bet but there are also three jackpot tiers that can drop instantly. All in all, it is a fun game to play that has a potentially rewarding taste

The graphic design attempts to replicate the atmosphere inside a beer house, or should we call it, bier haus. We are right at the bar and the background is made of barrels of beer waiting to be consumed. The top of the reel set is similar to that of Heidi and Hannah's Bier Haus in that each reel is topped by a tap, which gets turned for a specific event in the gameplay.

Bier Haus Oktoberfest slots has few moving parts and some animation on the reels. There isn't much going on in that view, but it doesn't mean that the game is uneventful. The symbols are the cards' suits, for the low-paying category and a number of objects that can be found at the festival: harmonica, horn, pitchers, pretzels, a house, the beer maid and a Bavarian man wearing a traditional hat.

Playing the game begins with selecting the wager per spin. It's best that this small task is completed before you make any spins, as the default bet may be a sum that is too high or perhaps too low for your liking. So, pressing the minus and plus buttons specifies the total bet amount that is going to be deducted from the balance with each spin.

The start the reels spinning press the big circular button in the bottom-center area of the screen. Another way to go about playing Bier Haus Oktoberfest slot is by selecting the autoplay mode. Press the button to open up the menu where you can choose the number of automatic spins and add few optional settings.

Players who want to get acquainted with the paytable before they play the game can do just that by pressing the question mark button in the bottom left corner. Also, the button that says Turbo Mode causes the reels to spin faster and stop sooner than the usual when it's been toggled on.

Winning in the game requires three matching symbols to land on one of the 50 paylines. Because this is a multiline game, it is also possible to get multiple win outcomes from the same spin.

Bier Haus Oktoberfest slot has medium volatility which means small, medium and big win outcomes are possible and that long pauses between the smaller win outcomes aren't going to be too common as in high variance slots.

In terms of payouts, the most valuable symbol in the game is the pint of beer. Six of a kind pay 2.2x multiplied b the bet. The Bavarian man's symbol pays 1.6x and the remaining symbols pay smaller amounts for six of a kind.

Players with a gripe about the paytable need to consider the fact that this is a 50 payline slot and more than one win outcome from a single spin is quite possible, and that this is a jackpot slot.

The bier symbol is the game's wild. It substitutes for all, except for the bonus symbols. The wild is a random event and any spin can result in any number of reels filled with beer, which means, they can become partially or fully stacked as a wild reel.

There are three bonus symbols that represent Heidi - green, purple and red. Each one is a reel modifier.

Green Heidi can appear on any of the reels; purple Hidi also appears on all six reels and when it is on the reels during a free spins triggering event, it remains sticky during the bonus spins; red Heidi can appear on reel four only and triggers Heidi's Wheel when there's been a win helped by that symbol.

Heidi triggers the free spins bonus when it shows on between five and up to 20 positions on the reel set. The number of free spins ranges between 5 and 100.

What is amazing about the bonus is that it guarantees a minimum of 50x win multiplier. If the player doesn't get 50x then the end of the feature bumps up to that outcome.

The game is available as a free play demo slot at online casinos that host games in practice play mode. This enables players to try the game with free credits and decide whether to play it with real money.

The game is rich in extra features and it is very much fun to play. The ‘problem’ are the small payouts in the base game, which is something that is balanced out by the free spins bonus and the potential wins in Heidi’s Wheel bonus.