Players who play Big Cat King Megaways will find the good old layout for most megaways slots - six reels and rows that shift in number between two and seven. Although forgotten for a period of time by most slots makers, the additional row of four reels has been added to help boost potential winning outcomes. The game comes with a Buy Feature option, medium to high variance and a theoretical return to player of 96.50% 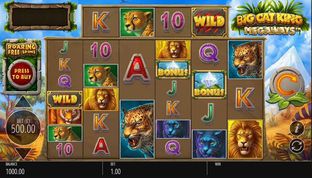 Blueprint Gaming are giving the Megaways engine a wild dressing as in their latest release for that payout system they have considered placing some of the most fascinating wild cats from around the world. Cheetahs, panthers, pumas, tigers and lions grace the six reels of the game, which comes with a maximum payout potential of more than 50,000x your bet.

The game is dynamic and that is to say the least. All of the cats are high-paying symbols on Big Cat King Megaways slot, but you should know who presides over that kingdom, which is the game's most lucrative symbol. The cascading wins payout mechanism is active in the base game and in the free spins bonus, which comes with a twist that players may get to experience on the Bonus Wheel. Overall, this is a thrilling game to play.

The look and feel fo the game has been made to draw even the biggest apostates of the megaways system. The win multipliers can boost any winning outcome that emerges in the free spins bonus, which is marked by visual niceties on the reel set. Big Cat King Megaways slots comes with few animated sequences, but that is as much as the megaways layout can allow.

In terms of the style in which the symbols have been drawn and rendered, the low-paying category are almost-basic royal cards plus the nine and ten card, while the high-paying symbols are the set of cats which have been given the due amount of coloring and shading so as to appear as nearly as natural.

The game comes with a soundtrack which is an African theme, for which we think most players will get to enjoy.

Setting up for the gameplay is as easy as on any Blueprint Gaming game. All of the controls can be found in their familiar places, but for players who are new to the world of online slots, we'll lay out some guiding details.

The play button is an orange half-arrow that can be found on the right side of the reels. Below it are two smaller round buttons. The first one brings up the paytable and the second opens up the menu of the autoplay mode.

Speaking of, those who play Big Cat King Megaways in autoplay get to enjoy a hands-free ride through the savanna. The menu contains several presets for the automatic spins plus few additional settings that enable you to control the process.

In terms of bets, players can select one of the available amounts by pressing the down and up-pointing arrows on the left side of the reels. Pressing the circle in the middle also opens up the options for the wager, which are between 20p per spin and £20.00 as the maximum.

Last but not least, Big Cat King Megaways slot comes with a buy feature which can launch the Roaring Free Spins by pressing the red button on the left.

Winning in the game requires at least three matching symbols to land starting on the leftmost reel and to extend towards the right on adjacent reels. Optimal payouts can be made with six matching symbols, where the lion, who doesn't sleep tonight, can pay 50x your bet for six of a kind.

All other symbols in Big Cat King Megaways slot pay amounts that are smaller. Most of the high-paying symbols don't return the wager for four symbols. This has to be seen through the prism of the cascading wins system, which can convey multiple payouts from the same bet.

The game comes with a wild symbol that substitutes for all other, except for the Bonus symbol, which is the scatter that triggers the free spins feature. This symbol is represented by a white diamond and players need to see at least four scatters to trigger the bonus wheel.

This is where players can either keep the initial 12 spins or spin the wheel to gein more spins, or drop some. On the triggering event, each additional scatter symbol adds five extra spins to the tally.

The players can get the benefit of win multipliers for each winning cascade. The logic goes, the more cascading wins, the greater the multipliers, to which there is virtually no limit.

Another important detail in Big Cat King Megaways is the mystery symbol, which can post on multiple positions on the reel set and convert each one into the same matching kind.

The game comes as a free play demo slot, made possible by Blueprint Gaming and online casinos who host the game in its ‘practice play’ mode.

There are many jungle-themed megaways slots. This is a savanna, but same difference, as there are big cats for high-paying symbols. Nevertheless, the game is exciting to play, comes with a theoretical RTP that is greater than the 96.00% average and players can ride on the benefit of the win multipliers in the free spins bonus. Overall, to play Big Cat King Megaways is definitely fun and potentially a worthwhile experience.