Discover a cast of silly alien heads that need to form clusters in return of cash payouts on the Alien Antix slot. The game has 64 square grids that offer collapsing/cascading falls. A wild substitutes for any and triggers the free spins bonus and colossal symbols make their own imprint on the game. The maximum payout is 50,000x and the game has a high variance. 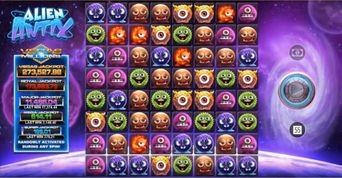 We have seen our share of both grid based slots and grid based slots that have to do with alien heads. There is a pattern in this regard. Cluster wins and esoteric creatures with funny faces, just like Reactoons and to an extent, Jamming Jars slot.

But is Alien Antix slot from Blueprint Gaming any different. There may be something more to it. For starters, the grid is made with eight horizontal and eight vertical rows to form a chess board like field of 64 squares.

The players will find a game that is fun to play nevertheless. You will need to see five or more of these alien creatures occurring on horizontal or vertical rows and adjacent to one another for a winning cluster to form. Top payouts are made with 25 or more of the same.

Besides the wild, without which Alien Antix would have been unmentionable, there are extras such as win multipliers, a free spins bonus and colossal symbols.

What is more, but not unexpected, are the cascading or exploding wins. Call them what you will, these deduct the winning outcomes and add new symbols for the possibility of another win.

Blueprint have some impressive productions under their belt and this game is no exception. The critters display life of their own, with expressions ranging from woozy to amazed to grinning. Each winning outcome is made known by a light effect causing the symbols to evaporate.

The colossal symbols create a neat effect of their own and are a delight that should be hopefully seen as often as possible. Meanwhile, the background on Alien Antix slots shows a volatile corner of space with meteors blasting away the surface of the planet below. Bizarre space objects float around and there is a galactical vortex that spins in place.

All of it is bizarre, but highly entertaining and potentially rewarding for the lucky players.

How to Play Alien Antix Slot

The layout makes everything in open view and easy to configure the settings. Besides the window in the top right corner that displays the amounts of the total win, everything else in Alien Antix slot is below the reel-set.

If you are used to seeing the big arrows pointing up and down and the big round button for the bets, you'll find none of it here. The bets can be selected from the bank-note symbol that is found to the right of the reel set.

Your standing balance is in the bottom left corner and the third window from the left displays the progress of the consecutive wins.
As for the bets themselves, they start at £0.10 per spin and end at £500.00 per spin.

Once you are ready to play Alien Antix, hit the Play button, which is portrayed as a big round space ship. Underneath it is the autoplay button that lets you set up the automatic spins mode. This feature lets you add optional stops that give you more control over the balance.

How to Win Alien Antix Slots

Like we said, cluster wins start at five symbols of the same kind and the wild can certainly help to these outcomes. That symbol is an atom and its electrons in their eternal spin.

The most valuable symbol on the reels is the orange cyclops alien. If you are lucky enough to see a win involving this symbol in 25 instances or more, the prize that you can tell your friends about is 100x multiplied by the triggering bet.

Regardless of what symbol the win has been made with, the wild symbol in the cluster causes the winning outcomes to gain a 1x multiplier for each cascading win. While in the win zone, the wild stays on the grid for the next symbols fall and moves one place to the left or right.

One of the extras in this game are the colossal symbols. These can be any of the alien heads on the paytable, but the essential difference is that they can take up a rather sizeable chunk of the reel-set.

Another feature in Alien Antix slot is the free spins bonus which is called Colossal Capers Free Spins. Since there aren't any other symbols but those of the aliens and the wild, it is that symbol which can trigger the bonus.

We need three of the same to get 8 free spins. The kicker here is that every single one of the free spins gets a colossal alien head.

People who want to try the game and see if it is to their liking can do so with the free play demo. Demo slots are available at online casinos that host them.

This isn’t the only grid-based game with a cascading wins payout system but there are gameplay features in it that make it stand apart. The free spins bonus seems like the best place where to land potentially big wins with the help of the wild symbol as well as with the colossals.