Travel to space and discover the Little Green Men: Warp Reactor slot. This game is a sequel to the other slot by IGT called Nova Wilds. Expected to launch in June, Little Green Men: Warp Reactor will have seven reels where you form combinations via clusters of symbols. This game accepts small bets starting from £0.50 and going up to £10 per spin. Despite the fact that the theme of this slot is an alien one, the green visitors from space are not joining the slot’s regular symbols. 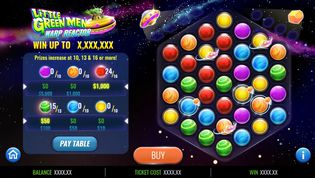 The International Game Technology (IGT) is releasing a new video slot this summer called Little Green Men: Warp Reactor. This slot will be a sequel for the slot called Little Green Men: Nova Wilds. The Warp Reactor is a slot with Hexahedron clusters and will be played on seven reels. Due to the fact that this game is created with Hexahedron clusters, players will be able to form combinations via clusters of symbols.

Alien slots have become so popular among the players so that the providers started producing more and more alien-related slots. One of them is this slot which promises a great time of playing. There, betting ranges from £0.50 and goes up to £10 per spin. Fulfilled with colourful planets, Little Green Men: Warp Reactor doesn’t include alien symbols even though it is an alien-themed slot.

The only downside that this game has is the RTP that is 93%, considerably lower than the average RTP in the modern slots nowadays. The variance is still unknown. In addition, this game will be available to play on both desktop and mobile devices, which is a great thing, given the fact that players spend most of their time on their smartphones.

Probably the most interesting feature about this slot is the Hexahedron clusters which make the game stand out among other alien-themed games. Little Green Men: Warp Reactor is not a usual slot game and is very entertaining.

It’s already clear that this slot is all about aliens and planets. It is a colourful slot with planets in green, red, blue, yellow, orange, and purple colours. The graphics is great, while the background shows the galaxy filled with stars and an alien’s warp reactor is lighting up the slot. From the information that we have now, this game has only planet symbols in various colours.

In order to play this adventurous slot, you will have to place your bet before begin playing. This slot has the opportunity to place low bets, starting from £0.50 and going up to £10 per spin. You have to pick the wager that you want to use and select the bet per spin according to your budget. After that, you are ready to hit the spin button and start winning great prizes!

In Little Green Men: Warp Reactor slot, the Clyster Pay system is used for the winnings. This means that the game requires landing at least three matching planets next to each other in order to form a winning cluster. When you form a winning cluster, you will collect symbols and depending on their type, you will win a particular prize.

As we know, the predecessor of the game, Little Green Men: Nova Wilds has free spins feature which is activated when three or more bonus symbols trigger the spins. In this case, the reel-set expands by double the number of rows, that is, a total of six rows in height. We will see whether the IGT will include this feature in the sequel known as Little Green Men: Warp Reactor.

Since the previous game is able to see and try in a demo version, it is expected that this one will also be available for free play. Just like it is now, the option to play the game for free is available on specific sites. You will have to register to some of those sites by claiming a welcome offer and try the game for free. Here you can find the top-rated UK online casinos where you can try a lot of games for free.

From the information that we currently have about this game, we can say that it looks interesting and will have great features given the fact that it has Hexahedron clusters. Moreover, since the Nova Wilds slot delivers the potential for big wins and free spins, we expect that Little Green Men: Warp Reactor will deliver the same, and even more!