For starters, we have a high variance game that puts the theoretical return to player not a whole lot under the average, at 95.00%. The layout is a three row and five reel with 20 always active paylines. Symbol payouts made with the gladiators are generous if you are lucky to land five on a payline, with the most valuable one paying 25x, while the rest don't fall behind by large increments. 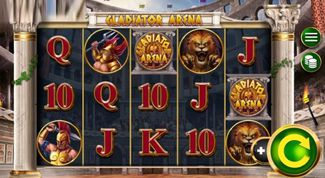 Booming Games take you straight to the Roman Colosseum for an adventure on the reels that puts your trusty gladius against fierce lions and nasty gladiators.

Alright, the theme may not be such a rare thing in the world of online slots, but whenever this company releases a game the players are curious about it.

Booming Games have been around for awhile and have done enough in that period of time to earn themselves the "rising starts" award for the year 2019 at the International Gaming Awards. So can we expect much from this release?

On the reels Gladiator Arena slot throws in expanding wild symbols and expanding picture symbols from the high-paying category. A free spins bonus is also there for a chance take on the potential big payouts, but there is also a pick-me bonus feature.

The game offers a familiar setting, straight inside the Roman colosseum, where you are about to face animals and gladiators, all of which are well drawn and rendered. The visual artistry is paired with animated events, such as big wins being announced by a storm of golden coins.

Gladiator Arena slots does well to create a standard visual experience for a slot game that hasn't been announced with much pomp. Those familiar with the online slots released by Booming Games will easily find their way around, as the layout is intuitive and thus easy to navigate.

How to Play Gladiator Arena

You can begin your adventure on the reels by pressing the familiar green round button, which can be found in the bottom right corner of the screen. This action sends the reels for a spin, deducting the active bet once from the balance.

Before you make the first spin you can check to see if the default bet that's been set by the casino is an amount that you want to play on your first spin. To change the amount of the bet you need to press the coin stacks button in the upper right area.

Gladiator Arena slot allows a wide range of bets that begin with the minimum of £0.20 while the maximum is £100.00 per spin. Regardless of the amount you are going to select, the reels will always spin across all 20 paylines.

If you want to access additional options that are relevant to the gameplay you may press the plus button that is to the left of spin. This will open up a drawer with settings for autoplay, turbo and sound. When you toggle on the thunder button the reels will spin faster.

If you want to play Gladiator Arena hands free you can press the play button and the automatic spins will begin immediately.

How To Win Gladiator Arena Slots

Wins in the game are made with three matching symbols which must start on the leftmost reel. These need to post on any one of the 20 paylines, however, also possible are wins on multiple paylines resulting from the same spin.

The high-paying picture symbols are the gladiators and the lion. These cover one position on the grid of three by five, however, they can also expand to cover the entire reel. Another feature is reserved for the wild symbol which can expand on the reels but also come into play as sticky.

The most lucrative symbol is the gladiator in a gold-plated armor. That symbol pays a rather generous 25x but you need five on the payline to get that prize. The one with the trident brings 20x on the win and the old-guard soldier pays 15x. The lion is worth 10x.

The game comes with a free spins bonus and this is the most anticipated feature on the reel-set. It is triggered with three Gladiator Arena scatter symbols, which are golden medallions that represent the game's logo.

These symbols don't pay any amount, but they do trigger the initial free spins which in the Gladiator Arena slot can be retriggered. In the bonus feature event the players can get the benefits of sticky wilds which can also come on as expanded symbols.

Booming Games are a company that is relatively new, so it is in their interest that more people discover their online slots. The possibility to discover the game at hand is there. You only need to find an online casino that hosts free play demo slots and in that regard, here is a hint: there are some excellent casinos that you can claim a bonus for, right from this page.

We have a theme that isn’t unseen in the world of online slots, but how many companies have in fact done it very well? Few we should say. In terms of the payouts, the game brings out a good potential thanks to the expanding wild symbols.

Discover the Gladiator Arena slots by claiming a welcome offer right from this page and play at top rated online casinos.