Travel back to the days of the glorious Roman Empire with Spartacus Gladiator of Rome slot! This WMS Gaming online slot comes with the popular Colossal Reels feature along with the standard reel set. So, two reel sets with a total of 100 paylines for more winning possibilities! You can play for as little as £0.10 up to £250 and land free spins and multipliers. If luck is on your side, you could even land the maximum payout of 4,000x your bet for the spin!

The ever-popular theme of Ancient Rome presents itself again, this time in the form of the five-reel Spartacus Gladiator of Rome slot. Take a journey back to the Roman Empire and the gladiator rebellion for some online slots action and abundance of incredible features and opportunities to win big cash!

Spartacus Gladiator of Rome slot is quite unlike many other slot games, featuring two reels and a combined total of 100 paylines to win across. Whilst the left set features perfectly normal five reels by four rows, the right set still has five reels with 12 rows! This particular feature is referred to as the 'Colossal Reels' by WMS Gaming and we think we can see why!

Aside from the obvious visual difference, the design is also worth noting. The graphics are exceptionally good, including the symbols and the background. The Spartacus Gladiator of Rome game logo is also well-drawn and looks like something you might see on a film poster. That’s perhaps not too strange considering how many times this historical figure has been on both the small and big screen. 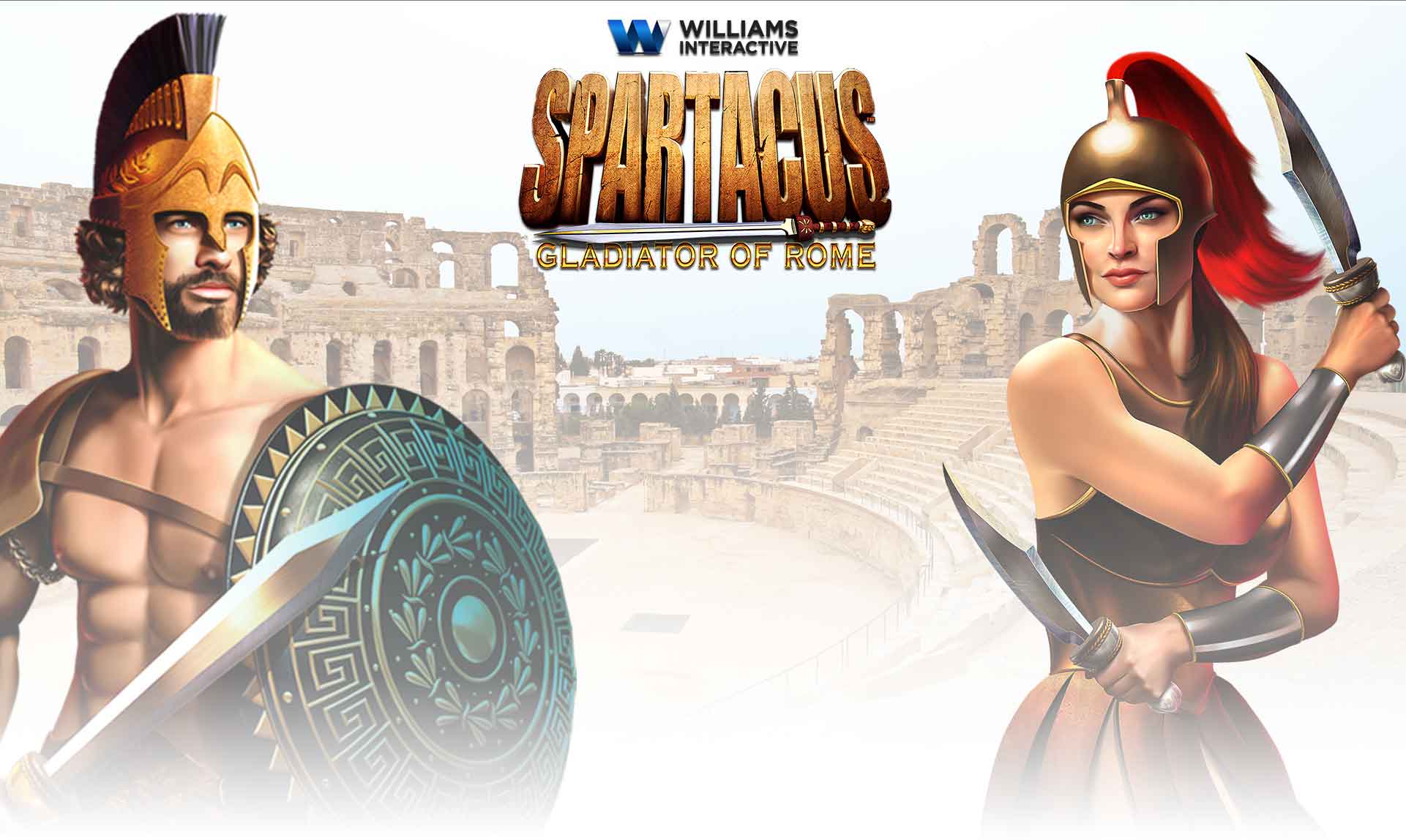 When playing the best Spartacus Gladiator of Rome slot game, you can land various reel symbols. The low-value symbols in the game include playing card suits, diamonds, clubs, hearts and spades in pink, purple, red and blue, respectively.

The higher value symbols comprise of more on-theme images such as a sword and shield, a Roman helmet, a lion and a masked gladiator. Plus, Spartacus appears stacked. There’s also a Colosseum scatter symbol and the winner Spartacus slots game logo as the wild.

Many of the symbols appear stacked when playing Spartacus Gladiator of Rome on both reels. This means it’s easier to land winning combinations, in theory.

How To Play Spartacus Gladiator Of Rome

Before you spin for the chance to win on Spartacus Gladiator of Rome slot, you need to select your stake for the spin. You can start by selecting the coin size and you can do this by using the buttons next to ‘Bet/2 Lines’. The available options range from 1p to £5.

Once your stake is established, you can then use the arrow spin button to set the reels off.

How To Win Spartacus Gladiator of Rome

In order to receive a winning payout on Spartacus Gladiator of Rome slot, you need to land at least three matching symbols across any active payline, on either set of reels.

Because of the number of paylines, you should be able to land winning combinations more frequently, in theory. The highest paying symbol in this slot game is the stacked Spartacus, while the female gladiator isn’t far behind in terms of value.

The wild symbol also helps to create wins by substituting for all others, except the Colosseum feature symbol, fitting in to help create combinations.

The Colosseum feature symbol also acts as a scatter and can land anywhere in sight on the reels. If three or more scatters land, a multiplier will be added to the total bet and the bonus feature will be triggered.

Aside from the unusual two sets of reels, Spartacus also includes some colossal bonus features.

As many of the symbols are stacked on both sets of reels, landing winning combinations is made easier in this game.

When the wild appears stacked and is covering a whole reel on the smaller set, a copy will transfer itself to the Colossal set too, covering the reels here also. This feature is a great way to make some money when playing Spartacus slot.

Spartacus Gladiator of Rome slot has a Free Spins bonus feature which is triggered when you land the Colosseum scatter symbol on reels one, three and five, on either set. Because there are two sets of reels, there is the potential to land more than five scatter symbols. If you do, you'll receive:

Plus, if part of a stacked wild lands on the main reels during this feature, the rest of the stack gets nudged into place. This then copies itself over to the Colossal reels in order to make more combos. You can then win even more free spins, whilst playing the free spins feature!

The acronym for return to player is RTP and is a term that is most often used in the online gaming industry. The most straightforward explanation for this term is that it shows the rate of the wagered money that after a certain amount of plays on a certain slot game will be returned to the players.

This percentage is often based on about 1000 plays on a certain game, so you can conclude that the percentage is estimated over a longer period of time. Keep in mind that the RTP isn’t a calculation that shows you the win frequency percentage. This is the most common misconception related to the return to player term. So, it is important to keep those two terms separate.

The obvious stand-out feature here is the Colossal reel, contributing to the huge total of 100 paylines and the obvious increased chance of landing winning combinations! This feature really does add an extra exciting element, and alongside some great bonus features, this helps make Spartacus Gladiator of Rome slot a popular game for good reason.

The design of Spartacus is also great; the symbols are well-drawn and even the subtle background helps to create an all-immersive gaming experience. The gameplay and animations are also smooth and the reels spin at a nice speed.

The stake options are extremely varied and Spartacus appeals to players of all budgets as a result. Plus, the free spins feature, triggered by the Colosseum symbol, is a lucrative one, giving players a good chance of securing nice cash sums, not only through the free spins themselves but also the multipliers that are applied to the total bet.

Play Spartacus Gladiator of Rome slot today and spin for the chance to win at one of our featured casinos. Play for fun and you could land huge cash prizes in an instant!