The game at hand comes with an expanded Megaways layout comprised of six reels and a maximum of ten instead of seven rows plus the additional element at the bottom which is made of one row and four reels. Punters who are eager to play Spartacus Megaways can spin the reels for as little as 20p for a chance to land winnings on up to 1,000,000 megaways. The theoretical return to player of the game is 96.32% and the math model has high variance. 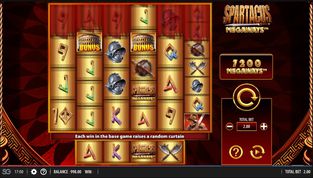 When a veteran giant in the gaming industry takes up one of their famed games and steeps it in a megaways math model the result ought to be amusing, to say the least. Williams, part of the SG Digital group has done that to the Spartacus Megaways slot. The familiar look and feel of the WMS classic has been given the full megaways treatment to the effect of one million ways to win as the game's maximum.

When it comes down to the gameplay, we seriously doubt that anyone could not like Spartacus Megaways. The game packs a fun-loving gameplay on a reel set that is partially veiled, so every spin can become a dynamic reel adventure thanks to the cascading wins payout system and the classic WMS graphic design. It is very likely that the game was made for the casino floor too, which is an exciting thing to consider that you may be playing at the same time with a random person somewhere in Macau or in Las Vegas.

The graphic design echoes the style of WMS and the entire Scientigi Games Digital group of providers. Players who've strolled down any casino floor, from Atlantic City to Vegas, are going to recognize the classical look and feel of these games.

Spartacus Megaways slots has done well to adapt to the megaways engine. The winning outcomes are marked in a way that is cool to see and dynamic, which means WMS has mastered the animation crossing over into the coming drop of symbols.

On the music front the players are welcome to submic to the orchestrated theme that has an epic depth to it. Overall, the game gets five stars on all points that pertain to the graphic design.

How to Play Spartacus Megaways Slot

So you've reached for the lever are are ready to pull it so that the potential megaways can be released across the expanded layout. This battle between Spartacus and the house of Rome is going to require bets that are between 20p and £20 per spin.

Regardless of the bet amount, Spartacus has an equal potential of delivering the biggest slash so that the engine leaks out a winning outcome of up to 12,500x.

To choose the bet players need to simply press the minus and plus buttons on the right-hand side of the reels. The round golden spin button is above these two buttons and below is another set of two for the autoplay and for the paytable.

The autoplay option is a perfect way to enjoy the Spartacus Megaways slot without having to push the spin button each time. The menu enables the player to choose from the automatic spins presets and add additional options by selecting the advanced menu that has a loss limit and a single win limit.

How to Win Spartacus Megaways Slots

In terms of potential payouts, the game reflects a paytable structure that is similar to most megaways games.

The cascading wins payout system is the reason why the low paying symbols can only add 0.05x your bet for a win of three of a kind and between 0.15x and 0.4 for four of a kind. Even wins with five symbols can bring between 0.5x and 1x your bet.

The high-paying symbol category in Spartacus Megaways slot has payouts that range between 0.2x and 25x for three, four, five and six symbols. The most valuable tile is the game's logo, which pays 25x your bet.

Spartacus Megaways comes with a wild symbol that substitutes for any other except for the bonus scatter. The wild, which is represented by Spartacus, appears on the four reels between one and six.

The game comes with a free spins feature that is triggered with four scatter symbols. Since there isn't a fixed number of free spins, the game lets the players spin a wheel of fortune that determines that number. The potential number of spins is 6, 8, 10, 12, 14 and 16. The bonus game can retrigger with three or more amphitheatre symbols.

Players can try the game as a free play demo slot, along with all of the features, the shifting curtains included, at online casinos that feature WMS and SG Digital slots in practice play mode.

The maximum payout potential of the game is 12,500x multiplied by the winning bet and the gameplay is one of the most dynamic displays of the megaways engine, with a WMS look and feel. Overall, it’s a great game to get acquainted with. And in all honesty, the original Spartacus Gladiator of Role slot may induce nostalgia, but the megaway version is better by a long shot.

Discover the Spartacus Megaways slots by claiming a welcome offer right from this page and play at top-rated online casinos.