Hey Sushi comes with three rows and five reels that spin across 25 always active paylines. Wins are made with three matching symbols, or more, on a high variance setting. The game has a theoretical return to player of 96.71% and a grand jackpot. The maximum exposure is 1304x multiplied by the winning bet. 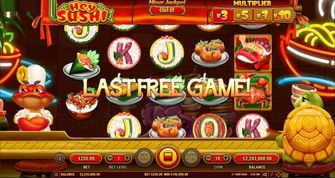 Habanero Systems have put a red crab in charge of a sushi restaurant, and not just your typical sushi booth. This is one of those conveyor-belt sushi bonanzas where connoisseurs can enjoy the works. The game is aptly called Hey Sushi slot, as it succeeds in grasping the popularity of this Japanese culinary delight.

The slots experts at Habanero have created an exciting reel adventure that comes with few extra features. The game has a wild symbol, scatter which triggers a free spins bonus feature, and win multipliers. What is more, the payout system is cascading/avalanche wins, which is always an engaging reel adventure.

In terms of graphic design the game does everything right to make the sushi restaurant theme look and feel right. Hey Sushi is a restaurant in an alternative universe where octopuses and crabs run such restaurants. Each of the symbols are sushi-related and they've been made with attention to detail.

For example, the king card symbol is made of tenticles and the jack is made of avocado (avocado roll anyone?). The queen card has been layed out on a platter of pickled ginger, and so on. High-paying symbols are platters and delicacy sushi rolls. Each win outcome in Hey Sushi slots is marked by neon-sign visual effect, and there are few other quick transitions in the game.

The entire setting of the game is about sushi, so there is no way to play the game and not crave some.

How To Play Hey Sushi Slot

Those who are eager to sit by the conveyor belt can join the golden tutrle and wait for the good stuff to arrive. It all begins with the push of the play button, which is located in the bottom of the reel-set, right underneath the third reel.

But before you pick up your first roll with the chopsticks, or fingers, it's best to configure a bet amount that you deem appropriate for the reel adventure ahead. To do that, select the coin value, which can be done by pressing the minus and plus buttons.

The above determines the bet amount, however, the bets can be raised higher or fine-tuned by selecting the bet level. Each number represents a multiplier for the bet amount that's been selected from the Coin setting. The smallest bet in the game is 25p and let's just say that the biggest bet doesn't end at £500.00 per spin.

One way to play Hey Sushi slot is by selecting the Auto Play button. The players can select the number of automatic spins from the menu and add few other options.

How to Win Hey Sushi Slots

Winning at the game requires at least three matching symbols to land on any of the 25 paylines. Winning outcomes that involve multiple paylines are possible, as the game takes into account the wild symbol or symbols, and any of the available outcomes based on matching symbols across the five reels.

Hey Sushi slot has a wild symbol that is represented by a crab. This symbol substitutes for every other regular symbol on the paytable. In terms of values, four and five symbol wins pay the bigger amounts, while wins consisting with three symbols don't, or can barely, return the wager.

The high-paying symbols are various sushi rolls and delicacies such as sashimi, egg-fried shrimps, takuan and tamagoyaki rolls and so on. We can agree, it all sounds quite delicious. Sadly, Habanero Systems have left out the pinnacle for spicy-and-weird food lovers, the wasabi paste.

The game has only one extra feature and it is the good old free spins bonus, which is triggered with three or more of those cutting board stuffed with sushi rolls symbols.

During the free spins, the players can land potentially big prizes with the help of multipliers. Each cascading win results in one multiplier bar being lit in the top right corner.

So, the second win gets 3x, the fourth gets 5x, the fifth 7x and the sixth consecutive win gets a neat 10x multiplied by the triggering bet.

The jackpot prize is completely a random event. One needs to land the right set of symbols that don’t appear in the base game in order to play for a chance of winning the big pot.

The players can experience the game as a free play demo at online casinos that host slots in practice play mode. This enables many players to get a feel for the feature and the base game, with free credits in the game.

According to the specs, Habanero Systems have given this game 1204x multiplied by the winning bet for maximum payout potential, a sum that is on the lower end of potential wins, but nevertheless possible in its entirety.

Discover the Hey Sushi slots by claiming a welcome offer right from this page and play at top-rated online casinos.