Jack In A Pot Slot

Jack in a Pot slots features a 7×7 reel grid and benefits from cluster pays. This online slot, developed by Red Tiger Gaming, is visually impressive and is packed with special features, including four types of Wilds, Mega Tiles, identical reels, symbol swaps, free spins and much more!

Jack In A Pot Slots Online

Jack in a Pot slot from Red Tiger Gaming is another Irish-themed game that is based upon the classic ‘Luck of the Irish’ legend. Not that we are complaining; we love everything connected to the magnificent Emerald Isle, Leprechauns and pots of gold. To be honest, we don’t play Irish slots because of the rich history and the Nobel literate. We play because we hope a little bit of that Irish luck will come our way, whether your grandfather was called O’Sullivan, MacMahon or something completely different. There’s something about those rolling green hills and a spec of Celtic slot magic that sparks your imagination and makes you dream of pots of gold at the end of the rainbow.

Jack in a Pot Slots Overview

Jack in a Pot slots features a 7×7 reel grid and benefits from cluster pays. Visually impressive, the 2018 release is packed with special features, including four types of Wilds, Mega Tiles, identical reels, symbol swaps, free spins and much more!

As the game loads, you’ll see the main character – Leprechaun Jack, standing on top of pot full of golden coins. But wait, there’s a story behind it! Jack is first standing on a cloud with a mug full of beer. The strong wind blows his hat away, then his beer and eventually – Jack himself, who then falls into a golden pot.

Set amidst a landscape featuring evergreen trees in a hedge format, the Jack in a Pot slot has everything you would expect to find in an Irish themed slot with mythical characters. The bright visuals include a gold pot with gold coins scattered around and plenty of four-leaf clovers in the view. A chirpy Irish soundtrack completes the superb slot design.

Jack In a Pot Symbols

The lower value symbols in this slot are the full card suits of clubs, hearts, diamonds, and hearts, plus a light blue round-shaped symbol. The high-value symbols in ascending order consist of a green bow tie, a lucky horseshoe, a boot filled with gold coins, and a large golden coin with a four-leaf clover. The wild symbol appears in four variations, marked with a pipe, a beer glass, a hat, or a rainbow. The scatters in this slot are in the form of a round golden tile with a green heart and the words ‘free spins’ visible at the bottom. 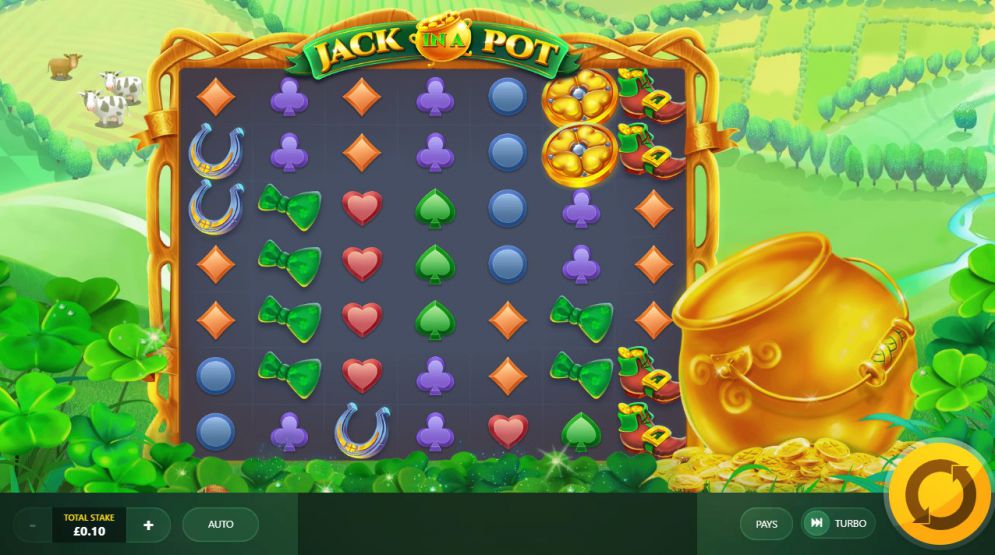 How To Play Jack in a Pot

It is very easy to play the Red Tiger Gaming title because the rules are as simple as possible. This is all the terminology you’ll need:

How To Win Jack in a Pot Slots

Make a cluster of five or more matching symbols and you will win a payout. Thanks to cascading reels, the winning symbols disappear, making room for new symbols to appear and form a winning combination. You can land a cluster of 40 symbols, which will get you an 80 times stake award if the combination was with Four Leaf Clover Coin, which is the highest paying symbol. Also, landing 40 Leprechaun Shoes will bring you 250 coins, whereas 40 Horseshoes are worth 100. The last from the high-value symbols is the Green Bow Tie, paying 50 coins for a combination of 40.

As with the lower value symbols, you have Spades, Hearts, Diamonds, Clubs and Circles, in descending order. Landing 40 of them will give you 35, 30, 25, 20 and 15 coins, respectively. 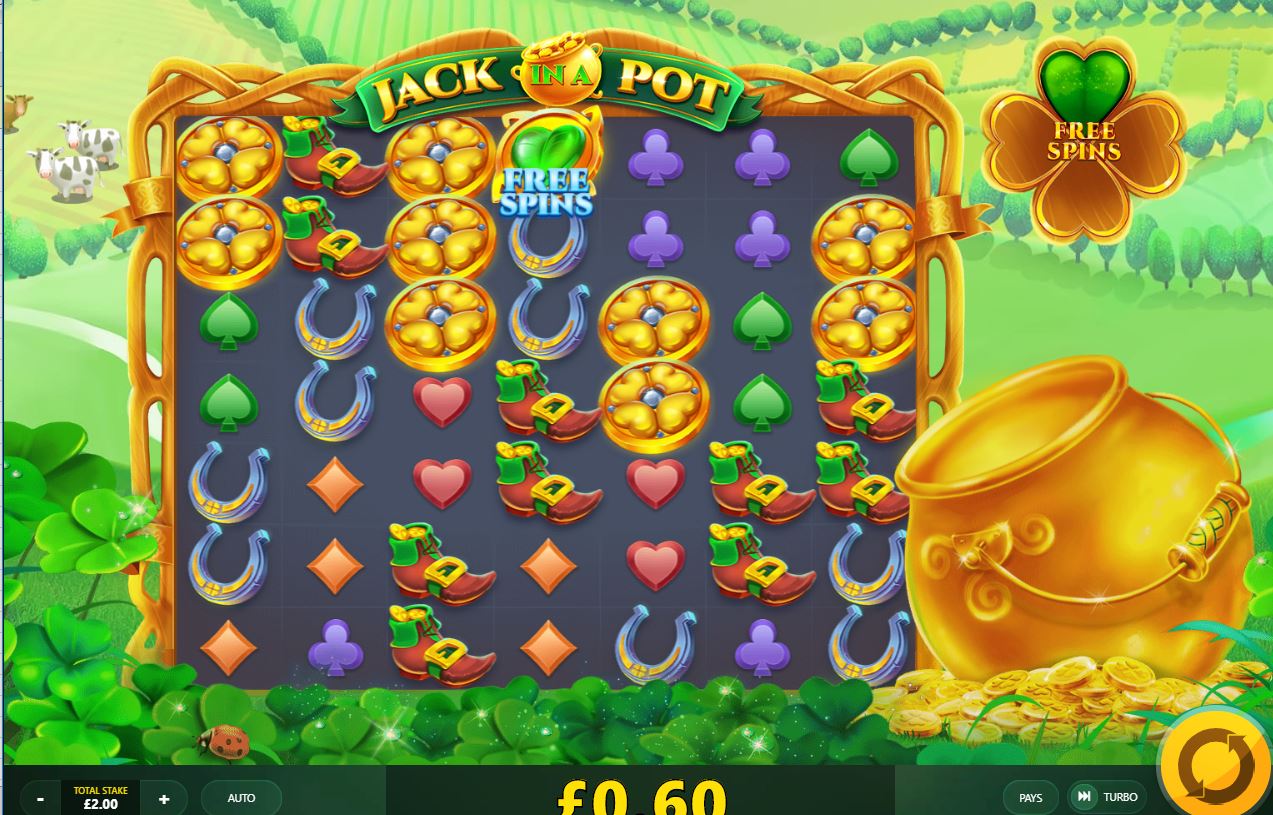 Jack in a Pot Bonus Features

Jack in a Pot slot is so popular and entertaining thanks to the five bonus features. So, keep reading to get more details about the Rainbow Swaps, Beer Reels, Magic Pipe, Hat Trick and the Jack in a Pot Free Spins bonus rounds.

A winning combination featuring the beer wilds turns on beer taps above the reels which pour new symbols into play and a new possible winning cluster.

This is activated when the pipe wild is part of a winning combo. Jack the Leprechaun blows into his pipe to turn some of the higher paying symbols into massive mega tiles. A new payout calculation then follows.

The top hat wild triggers this extra. The lower value symbols are removed from play to be replaced by potentially higher paying ones.

This is triggered by landing four free spin scatters over the course of one series of symbol drops. All wilds collect during the feature are activated 1 by 1 for bigger wins. 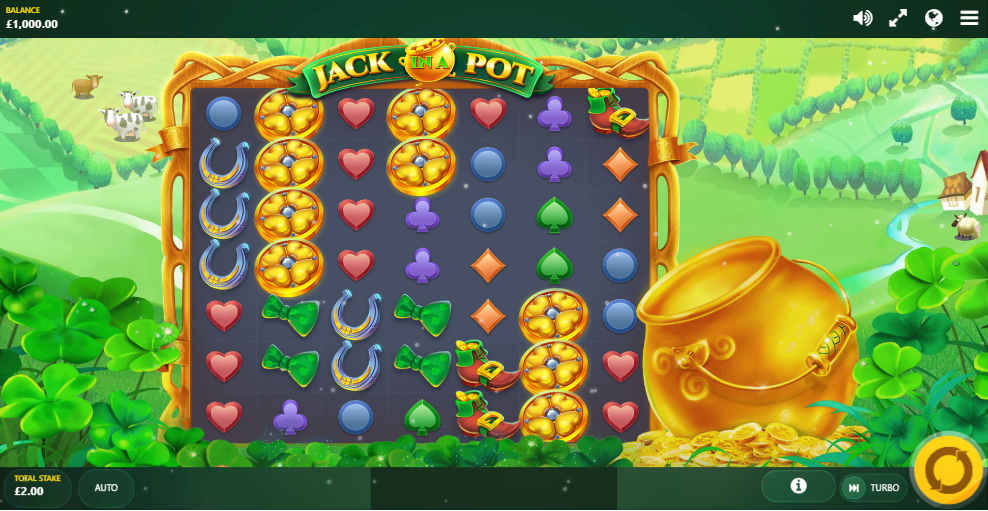 There are so many Irish slots out there and many of them are really popular among players from all over the world. At SlotsWise, we try to review as much of them as possible and give you a detailed insight on each of them individually. Here are our top three Irish slots picks. Make sure that you click on the links below if you want to read the full reviews on these online video slots.

The second Irish slot on our list is Luck O The Irish developed by OpenBet in collaboration with Blueprint Gaming. Luck O The Irish slot has four rows, four reels and 40 paylines. When spinning the reels of this game, you'll have a chance to trigger one bonus feature.

Our Jack in a Pot Slots Review

Spectacular animations, a quirky soundtrack, and plenty of action and features on the reels will provide enough excitement for every slots player. The unusual game engine and range of modifiers make Jack in a Pot slot worth trying!

If you like to give Jack in a Pot slot a go and try your luck, then visit a casino that's recommended here at SlotsWise. Find a welcome offer that you like and spin the reels of this online video slot.

GET A £50 WAGER FREE CASH BONUS