Discover the far-east themed slot named Golden Tiger. The game has five paylines that spin on retro-like three reels and three rows. The game has a top payout of 1000x in the base game and 10,000x on the bonus wheel feature. Play with as little as 10 pennies or up the ante for a maximum of £10 per spin. Filling the screen with the golden tiger symbol triggers the bonus wheel, while getting a stack of matching symbols on a reel triggers a x2 multiplier. 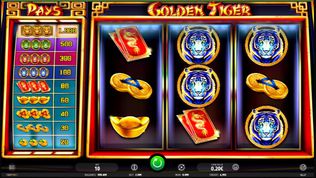 Golden Tiger slot comes by way of iSoftBet. It is very much a retro slot with its three rows and three reels. This arrangement could only mean one thing: five palines and wins made by three symbols on the line. So it is a retro slot as they could ever get. The simple layout is just up the alley of many classical casino games players. Such games used to be the norm in the old days of Las Vegas, and today we have online casinos riding the retro wave, whenever it comes.

How to Play Golden Tiger slot

The game can be played with a minimum bet of 10p per spin and the biggest bet is a mere 10 pounds, which is not a general sum to be wagered on a single spin, but for the players who want to engage in such reel action, the possibility is there. No matter the size of the bet per spin, the Golden Tiger slot will always spin the reels across all five paylines, and towards the possibility of triggering the bonus wheel spin, which could lead to the game's top payout of 10,000 coins multiplied by the line bet.

To start the action, locate the only green button in the game, which is the Spin button. It is just underneath the first and the second reel. To the right of it is the autoplay which lets the players select a number of automatic turns of the reels. This setting gives the players the option of choosing from the preset numbers and setting both a loss or a win limit. Each turn of the reels in the autoplay mode will deduct the amount that has been specified for the bet. To stop the automatic spins, press the same button again.

How to Win Golden Tiger Slots

Another thing that is part of the game is the paytable - nowadays, a standard component of online slots. Even though there is a paytable on the very face-plate of the slot machine, there is further information which could mean something to some. To access it select the 'i' button from the bottom of the screen. This will open up the list of symbols and their worth, besides providing information about the Golden Tiger slots features, such as about the multipliers and the bonus wheel.

The game's most valuable symbol is the golden tiger - hence the slot's name. It pays 1000x on the line bet but only when three such symbols land on a payline. The same rule counts for every symbol. There are three other tiger symbols - green, red and blue - each paying 500x, 300x and 100x respectively. The gold dragon cards, the sycee and the coins are the game's symbols of lower value, but which sustain the gameplay and the balance nevertheless.

The game has three features that can boost the winnings besides generating a thrilling experience on the reels. The  Golden Tiger collect feature occurs when it fills the entire reel-set with that symbol. The result is the bonus wheels. Before that, whenever three stacks of a matching symbol lands on the reels, the game adds a x2 multiplier on the winnings.

The bonus game itself is a bonus wheel. There are two wheels that are spun. On the left we have the game's symbols, which provide the cash prize, and on the right hand side we have the multiplier values. The prize is generated with the symbol's value is given the multiplier. The biggest outcome is with the gold tiger, a symbol which pas 1000x and the biggest multiplier is x10, so the Golden Tiger jackpot prize is 10,000.

The return to player is a theoretical outcome that states the amount that could be returned in cash, from the total that's been bet until an undetermined number of spins. So a return to player of 95.95% means that around £95.95 will be returned but the cash gain could be bigger if there are big wins during that stretch of gameplay.

iSoftBet are one of the better known slots production companies and deservedly so. All of their latest games have been optimized for the mobile screen. The game fits perfectly on android and apple devices, as long as the device can support the launching of an online casino on a mobile. The list of casinos on this page are all mobile-friendly, so claiming a welcome bonus will open the door to experiencing many slots games with free spins or bonus money or both.

This is the best part about the game - simple gameplay and three symbol wins with a top payout of 1000x, which multiplied by £2 per line on the £10 biggest bet, leads to a £2000 payout. However, during the bonus feature, the 1000x multiplied by 10x does 10,000x on the line bet which on the biggest bet is a whopping £20,000 prize. Other slots themed on the Chinese idea of luck, like Caishen's Cash slot, are similar, but Golden Tiger is one of the best retro games of this theme.

Discover this slot game when you claim a welcome offer at one of the casinos on this page.