Players will find a reel set that has a standard layout of three rows and five reels. These spin across 20 paylines and can trigger winning outcomes of three or more symbols. The theoretical return to player on Moose Vamoose is 94.00% and the variance is medium. This set of specs isn't too shabby for the potential payout of 500x which can grow bigger and can trigger from a single bet. 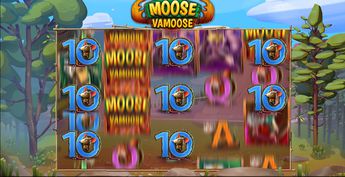 There is an intruder in the Alaskan wood and he is out to disrupt the peace and quite of a number of ninja-critters and their big, silly friend, the moose. Aptly or not, the game is called Moose Vamoose slot as it involves the broad-antlered fellow and his reel-modifying adventures.

The game is defined by a fun-loving base game that includes a wild symbol and another wild that subs as a scatter at the same time. A classical free spins bonus has been omitted but only to make room for a respin feature, of sorts, which shuffles things around, literally, towards making potential payouts.

The game is result of a cooperation between HungryBear and Leander Games. We can't know whose idea was it to draw and paint the symbols in the manner at hand, but it works and it can instantly create a following among the players, that is, if they notice it.

Moose Vamoose slots is lively on the reels. The gameplay is dynamic and there are animated bits on the symbols, when they are part of a winning outcome, but there is also full-scale animation outside the reels, because the deer and the hunter symbols move like they are in a cartoon.

When the reel set is in anticipation of another wild and/or scatter symbol, the reel that is adjacent to those where the good symbols have landed, starts to glow in an alien tractor beam-like light and causes leafs to fly around. Just another cool part to an overall cool graphic design and animation.

How to Play Moose Vamoose Slot

Setting up for the gameplay requires choosing the bet amount and finding your way around the controls and settings. Let's start with the first task. The button in the bottom left corner of the screen is represented by a stack of coins. Pressing it opens up the list of available bets.

Players can choose to play with amounts between 20p, which reflects one penny per payline, or any of the ten or more presets, including 40p, 60p, one pound and so on. The maximum wager on Moose Vamoose slot is £200.00 per spin and that involves £10.00 stake per payline.

To start the reels spinning press the big, round button in the bottom right corner of the screen. This action deducts the active bet amount one time from the balance for every spin.

Another way to play Moose Vamoose is by activating the autoplay. This is the button in the upper-right corner of the screen. There, players can find several presets holding the number of automatic spins in each. The 'i' button is for the paytable and can be found behind the Menu button in the opposite corner.

How to Win Moose Vamoose Slots

Making winning outcomes in this game requires three or more symbols to land on a payline. As it is usually standard for multi-payline slots, players can get more than one payline win across any of the 20. Another boon for the players is that the wild symbol can substitute for any symbol, and there are two of these symbols on the paytable.

Speaking of valuable symbols, the Wild is the one that players anticipate most in Moose Vamoose slot. The game's logo pays 500x multiplied by the payline bet for five of a kind. The wild, bearing a mug shot of Hunter Bill, pays 400x as a payline bet for five.

The three critters that strike-up a fighting pose are a piglet, a fox and a possum. If they land on five positions on a payline, the prizes are 400x, 200x and 200x respectively. Low-paying symbols pay between 5x and 50x for outcomes of three, four and five of a kind.

The bonus feature is triggered with three scatter wild symbols. The bonus includes the Sliding Wilds for an unlimited stretch, as long as there is a wild or wilds on the reel set.

Any winning outcome causes the wilds to slide to the left. When they reach the first reel they disappear from the game and the reels resume to spin until there are no more wilds. Any additional wilds that appear cause the feature to go on.

The game also has the so-called Vamoose Bonus, which causes any three matching symbols on reel one to lock and then float across the screen to the right and land in more than one reel in the same symbol kind.

We don't wish a forest fire to start in any place, but the game has a feature called Rapid Fire which is not caused by matches, rather by Hunter Bill's rifle, which shoots at the reels and causes a set of matching symbols to appear in those positions.

The game is available as a free play demo slot, which enables players to check out its features and the gameplay. This may inspire some players to take up the game for some time and others to pass it by, but we think it’s worth checking out.

It looks simple because of the style of the drawing and the overall design, but this is in fact an engaging game. The free spins bonus can be visited upon by two features and so can the base game. Overall, not such a bad payout potential for a medium variance game.

Discover the Moose Vamoose slots by claiming a welcome offer right from this page and play at top rated online casinos.