Follow Barry the Disco Leprechaun to the floor and hit the right notes for a chance to claim a symbol payout. This Leander Gaming release has five reels, three rows and 30 always active paylines. There are several reel modifiers and bonus features that make this game quite exciting, but with a top symbol pay of 200x, much is left to the probability of winning a free spins bonus, and the expanding wilds with a respin, which are quite frequent. 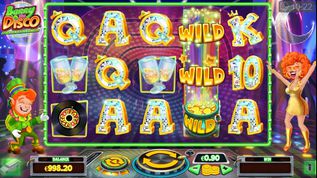 Play for a chance to make symbol wins with the expanding wild and respins, plus a free spins game in Barry the Disco Leprechaun slots.

If you were ever wondering what leprechauns do after sunset we'll just say they surely don't crawl back inside their mud huts. One of the most famous of these creatures is Barry the Disco Leprechaun and he's been given that name because he likes frequenting the disco, where he pulls out some funky dance moves and cash prizes.

This is a Leander Gaming slot game that provides entertainment as well as a thrilling time on the reels. The reel-set arrangement is the standard three vertical and five horizontal rows that spin across 30 always active paylines. The game has a neat array of reel modifiers and features that make our Barry all bubbly from the possibility of there occurring a big win.

And with five features, to be precise, those lucky players out there who get on Barry the Disco Leprechaun slot do stand a chance to land some pleasant wins. So let’s look at what makes this game a highlight in the world of Irish-themed slots.

How to Play Barry The Disco Leprechaun Slot

Before you push the CDJs play button to set the record in motion, it will make sense considering the starting bet. If that amount isn't what you'd prefer using as your bet per spin, then select an amount from those that are available. To select your wager use the minus and plus buttons to arrive at a bet of your liking.

The smallest bet per spin is £0.30 and the highest amount is £90.00 per spin. This gives the players a wide range of bets to choose from and thankfully, there are multiple amounts on the small end before they become large chunks of bets such as £7.50 and £15.00 and so on.

Barry the Disco Leprechaun offers the autoplay option which lets the players select a number of automatic spins, and there are several options to use additionally. There is a single win stop on the automatic spins, stop on a bonus feature, loss limit and a total win limit. Press play to start from the box and press the autoplay button again to stop this option.

The paytable is there to open up a view into the symbol pays, gameplay information and other details that may come in useful to certain players. To access the paytable select the ‘i’ button from the bottom right corner of the page, and select the trophy symbol from there.

How to Win Barry The Disco Leprechaun Slots

Besides the five features, which include a free spins bonus, this slot game doesn't offer the biggest pay amounts for a winning combination of any specific symbols. However, as we shall see, this is balanced by something else.

The four-leaf clover is the game's most valuable symbol and pays 200x multiplied by the line bet. It is followed not by one, but by three symbols that pay 80x when five land on a payline. This is part of the balance, because usually the symbols decrease in value from the initial high point. This time around, in the Barry the Disco Leprechaun slot, we have payouts that stay the same for the picture symbols.

The high cards are the lower-value category and these too, stay the same. Any combination of five matching symbols between the ten and the king pays 20x, while the ace on a line of five pays 40.

Normally we wouldn't consider the wild as a bonus feature, because it usually comes as a standard part of the slots, however this wild symbol is different. Besides being a substitute for any save the scatter, it also expands and provides a respin, so that's double the chance for a win.

The scatter symbol is represented by the star. It landing on three positions will trigger the bonus game. If two of these symbols land on the reels, the player is given a chance for a respin, which could result in the third missing symbol.

The bonus game in Barry the Disco Leprechaun slot is called Disco Fever. The game doesn't translate into free spins immediately, but you can end up getting this bonus as well. There is a timer counting down 60 seconds and during this time-window you have to select three notes of the same color. If the meter fills to the specific wedge, the Barry the Disco Leprechaun free spins are initiated.

The game has been given a decent return to player theoretical outcome which is above the average of 95.00%. With 96.26% on the potential return following an indeterminate number of plays, the bonus spins and the features provide a good chance for winning outcomes in theory.

This is very likely a high-variance slot that offers expanding wilds and respins with each wild. That’s a rarity in the world of online slots. The bonus game offers the chance to land cash prizes as well as free spins, while the symbol pays aren’t that exciting to be frank.

Barry the Disco Leprechaun is a perfect balance between bonus features and symbol pays, so it comes down to your luck in the end, as you may see any given symbol getting a boost from an expanded wild plus a respin.

Play this and many other exciting online slots to any of the casinos on this page. Claim a welcome bonus to start your adventure today.