The game comes with three rows and five reels that spin across 243 ways to win. Wins are made with at least three matching symbols across the adjacent reels on the playing field and regardless of their position on the rows. In terms of variance, the game is between medium and high, while the theoretical return to player is yet to be released. The maximum payout potential of Ape King is 1666x multiplied by the winning bet. 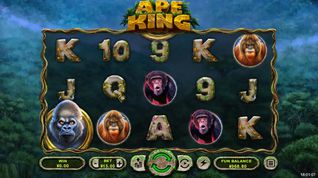 Apes are fascinating animals that possess intelligence levels which are unparalleled by other animals. Some think we've evolved from the same family of ape-like creatures, while others think that we are the aliens on this planet. Whatever the case may be, we as humans love games of chance. And who knows, it could be that apes have their own ways of organizing wagers. The game at hand doesn't prove any of the above, except that jungle-themed slots can be a lot of fun to play.

When it comes to gameplay features, Ape King slot is dynamic and very much fun to play. The 243 ways to win is a great payout system for the 3x5 layout and there are also extra features that can contribute to the dynamic. The game has a free spins bonus where the apes’ symbols are collected in order to improve the odds for winning.

In terms of graphic design, we have what appears to be a rather simple game. The background is an ima of a  rainforst covered in mist, while the reel-set is enframed in twisted lianas. The buttons have a rough stone finish so as to add to the Jungle theme of the game.

The symbols in Ape King slots are divided in two categories. Low-paying symbols consist of the royal cards, the ten and nine. High-paying symbols are several types of apes, including an orangutan, bonobo, chimpanzee, mandrill and a gorilla.

Each of the high-paying symbol is animated, so when it becomes part of a winning outcome, the animal springs to life and gives a fierce roar.  The scatter/wild symbol is also animated in the shape of a pot of gold that shakes and glows when it falls on the reels.

How to Play Ape King Slot

The slots experts at Realtime Gaming have included all of the game buttons and controls at the bottom area of the screen. To start spinning on Ape King simply press the big round button, which can be found underneath the third, middle reel.

To the right of that button is the one of autoplay. This is one way to play the game, as it allows the players to relax while the spins are unfolding on their own. Pressing that button opens up the menu where players can choose the number of automatic spins.

The thunder button lets the players toggle on fast spins, which can be done both in the autoplay game and when you play Ape King slotmanually.

In terms of the bets, the players can choose their bet amount by pressing the minus and plus buttons in the bottom left corner of the screen. The range of bets begins at 30p per spin, while the maximum bet is £150.00 per spin.

How to Win Ape King Slots

In terms of payouts, the game can trigger wins of up to 1666x multiplied by the winning bet. Wins are made with three or more symbols and must begin on the leftmost reel.

Ape King slot is called that because of the gorilla symbol, which is the most valuable on the paytable. There is a reason for this, and it shows during the free spins bonus.

The game has a wild symbol which subs as a scatter. That symbol is the pot of gold. In terms of payouts, the gorilla is the most valuable symbol. The wild symbol only appears on the middle three reels.

The pot of gold, which is the wild symbol is also scatter. If it falls in four positions on the reel-set the Ape King will trigger the bonus feature.

During the bonus, the ape symbols go towards the meter which has a specific spot for each kind of ape. In order for the apes to count on the meter, they need to fall on the reels with the gorilla also being present.

This is essentially the battle between the gorilla and the rest of the apes. As the lower-paying apes are removed from the bonus feature, the likelihood of bigger wins increases too.

RTG are expected to make available this game as a free play demo slot at online casinos that enable players to play in practice play mode.

In some respects this game reminds of Gorilla Kingdom, as it puts the big ape in the lead role, and because the free spins bonus removes symbols from the list from low to higher values. The payout potential of 1,666x is quite lucrative and it also helps that the wild and scatter are all one symbol, as that removes clutter from the reels.

Discover the Ape King slots by claiming a welcome offer right from this page and play at top-rated online casinos.