A volcano eruption game gets extreme with its reel modifiers and bonus features. There are explosive free games, hot wilds and respins. The action occurs on five reels and three rows, which deliver a highest paying symbols of 500x, 250x and 200x. Play with a minimum bet of 0.25 and on a theoretical return to player of 95.41% 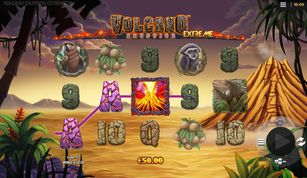 Play the Volcano Eruption Extreme slots for a chance to provoke a volcanic windfall of the wild symbols and potential winnings.

When the earth was formed it took more than seven days for the lava to cool off. Let's just remind ourselves, for the purposes of clarity and humility, how long ago it was before the planet was populated with what became the first inkling of a human-like creature. It was certainly a length of time that one cannot fathom. This is the setting of the Volcano Eruption Extreme slot where the winnings have the potential to erupt like the fuming volcano in the background. The reel set of three rows and five reels plays across 25 always active paylines.

The game's symbols are all molten formation that are have cooled down and cracked off to assume the shape and form of the high cards, starting with the nine and ending with the ace. The picture symbols are the creatures that roamed the earth a very long time ago, and this means big game in terms of what the players can get in terms of winnings. The Volcano Eruption Extreme has two bonus features which add an edge to the gameplay and to the thrilling ride trying to catch the volcanic windfall once it occurs.

So let's check out some actionable insights about the game, discover the bonus features and the ways to the big win prizes.

The slots professionals at NextGen have developed a rather awesome slot game. The symbols are lively, the gameplay fun and the controls are intuitive, so the game is easy to set.

To spin the reels simply press the play button, which is located in the bottom right corner of the page. There you will also find a number of buttons that have a say in the gameplay. The two coin stacks can be used to set the value of the bet, the symbol to the right of the play button is for the autoplay feature, and the three dash symbol on the left opens up the menu.

The paylines are always in the same number and always active, so there is no button that treats that value. This means the bet selection will be played with the amount that is displayed upon selecting your option. The basic bet starts at £0.25 and there are increments that make this bet double, at £0.50, £0.75 and £1.00. From there on the bets become higher but the players can still select amounts that are up to £12.50. All the other options for the bet per spin get more expensive, with the maximum amount that can be spent on a single spin is £500.

The paytable is a magical place that can be accessed from the menu, which is the three dash symbol. This is where the players can discover the symbol pays and information about the game’s bonus features. All in all, the paytable gives a clue to some players looking for answers whether a slot game may be worth playing. We think Volcano Eruption is definitely worth playing.

One of the biggest joys to see in the game is when the lines draw across the symbols on the grid when the winning combination occurs. The lines are drawn elegantly and smoothly, underscoring each win. In the event of the bonus being triggered, or the symbols that trigger it coming close to it, the volcano in the background rumbles and starts shaking. This causes the entire screen to do that. If the bonus is activated, the volcano erupt and creates the winnings that we all anticipate from the Volcano Eruption Extreme slots.

The game's most valuable symbol is the big lizard, fetching 500x for a string of five matching symbols. This amount is multiplied by the line bet. The next symbol in line is the parrot is 250x for five, and so on.

The wild symbol is the volcano and it pays 50x on the line bet with any two that appear on the reels. If there are three that stop, the pay is 125x, however the symbol appears only on the three middle reels.

The wild is the bonus symbol all at the same time. Havin this symbol land in three stops will trigger the eruption feature. In the event, the center reel becomes a stacked wild and five respins are given the reels on both sides. Once the volcano has erupted, the stuff that flies out from it and down on the reels are more wild symbols, thus creating chances for a bigger and better win.

To experience an adventure on the Volcano Eruption Extreme slot, start here by claiming the welcome bonus right from this page.