Wild Valkyrie slot from NextGen Gaming is a medium variance game that could possibly get you a maximum of 500x your stake on each spin. It comes with a Norse mythology theme and features morphing symbols. You can additionally benefit from the bonus features which include Wilds and Free Games. 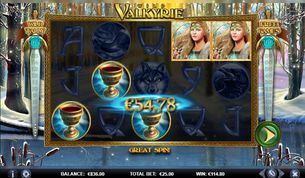 Powered by GamesLab and NextGen Gaming, Wild Valkyrie slot comes with five reels and 243 ways to win. It is a new addition to the Norse mythology online slots which could be played on all devices. You can spin for as little as 25p up to £50 per round and enjoy the morphing symbols that help you win bigger payouts. Moreover, Wild Valkyrie comes with a Valkyrie feature that could give you unlimited free spins and morphing spins with a 2x multiplier. Play Wild Valkyrie for the chance to win 500x your bet for the spin!

The Norse theme is noticeable right from the start because the reel set is placed against a background of some Nordic forest during wintertime. The reel set is placed inside a woven frame with two swords on the sides. The Wild Valkyrie game logo is placed at the top centre of the screen while the command panel is placed below the reels. One of the swords is a Wild Tally while the other will tell you the number of Free Spins that you win. A thumping soundtrack keeps you company while you spin the reels and makes you want to go into battle.

As with most online slots, the symbols in Wild Valkyrie slot can be split into a group of low values and a group of high values. The first group consists of seven symbols of which five are standard playing cards and two are theme related. The 9, J, Q, K and A have been given a rune-like twist, while the drinking horn and the chalice are picture symbols. They all award payouts for combinations of three, four and five matching symbols on a line.

The group of high-value symbols includes four theme-related images. The high values start with a black raven and a wolf and are immediately followed by a white horse and the Wild Valkyrie slot game logo. They also award payouts for combinations of three, four and five identical symbols on the reels.

When it comes to the special symbols, Wild Valkyrie makes use only of a Wild. It is the Valkyrie who is a grouped Wild on reels, 2, 3, 4 and 5 and counts for all symbols.

How to Play Wild Valkyrie Slot

Before pressing the green Spin button, all you need to set is your Total Bet. By pressing the left and right arrows on the coin box, you can select your total bet which ranges between £0.25 and £50.00.If you want to enjoy the gameplay without pressing Spin after each round, go for the autoplay option. Select one of the six available options and watch the reels spin for the selected total bet. You can stop this feature at any time by pressing Stop.

As with almost all new releases, Wild Valkyrie also comes as a free play version. This version is identical to the original real-money version in all aspects except one - the withdrawal. Because you are playing with virtual funds, you cannot expect to withdraw any eventual wins. However, you can still try all game features and options and prepare for the original version. The free play of Wild Valkyrie lets you select your stake, spin the reels and land winning combinations. You can also trigger the bonus features and see how much they pay. Once you feel you've learned all there is to learn about the slot, find the real-money version of Wild Valkyrie and play.

How To Win Wild Valkyrie

Wild Valkyrie slot is an All Ways Pays slot game. This means that the combination need not be in a single line but only on adjacent reels from left to right. As we have previously mentioned, all symbols in the game pay out for combinations of three, four and five matching symbols on the reels.

The 9, J, Q, K, A, the drinking horn and the chalice will bring you only smaller payouts. The real payouts start with the raven and the wolf which award 15, 30 and 125 your bet. The highest payouts in the base game are awarded by the white horse and the Wild Valkyrie logo. They will award you 30, 100 and 250 your bet for the spin.

All Wilds from the normal game and the morphs are added to the Wild Tally sword. Six or more Wilds accumulated awards up to 100 free games. During these free games, all new Morphing symbols pay double. The Wild Tally is reset to 0 before each normal or free game.

Six or more Wlds accumulated during a free game awards five extra free games. The free games are played at the bet of the triggering game.

The RTP of Wild Valkyrie slot is 95.90% which is a tad below what is considered average in online slots. However, this is not the lowest RTP out there and taking into consideration the excellent bonus features it’s not that important.

Wild Valkyrie is a medium variance online slot from NextGen Gaming that can pay out 500x your stake on each spin or free game. This can achieve this only if you fill the reels with the white horse symbol or the game logo and with the 2x multiplier.

If you want to try Wild Valkyrie, claim your welcome offer from the casinos promoted here at Slotswise and spin the reels of Wild Valkyrie slot for the chance to win big!