Nolimit City takes you to San Quentin, the notorious, California-based prison to explore the xWays mechanic and win huge prizes. When it comes to the features, theme and overall look, the developer has really pushed the boundaries with this one. They’ve “leaked” a couple of teasers before the official launch so that we know what will wait for us behind bars. Let’s take a walk through the San Quentin slot features in our detailed review below. 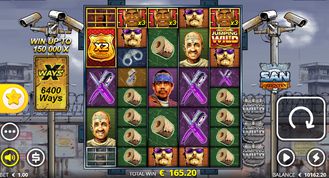 Once again, the creative team of Nolimit City didn’t fail to surprise and has delivered “controversial and infamous” title based on the San Quentin prison life. This slot game shares a few similarities with Punk Rocker, a previous release that first adopted the dirty and reckless vibe. This slot is powered with an xWays mechanic and features that include Splitting and Jumping Wilds, Lockdown Free Spins, Enhancer Cells for a possible win of 150,000x your bet. At the time of writing this review, the San Quentin slot has the highest payout potential out of a non-jackpot slot genre. Now, let’s explore the setup and base gameplay.

You’ve probably heard some trivia about the San Quentin prison in San Francisco, California. Even though it’s not your typical attractive destination, this place has been featured in many Hollywood blockbusters. Moreover, many musicians and rock bands have decided to transfer their live stage within the San Quentin borders, including Metallica and Snoop Dogg.

The San Quentin slot plays on a 5x3 grid with 243 active paylines. As usual, you can form a winning combination by landing at least 3 matching symbols on adjoining reels, starting from the leftmost. Licenced exclusively under the Nolimit City operations, the xWays mechanic introduces the surprise element, which increases the reels in height in an unlimited manner. As the theme and the title suggest, this slot game can be both extremely volatile and rewarding, offering wins of up to 150,000x your stake.

Before you try to hit the reel fence, you must place your bets per spin that go anywhere between £0.20 to £32. You can adjust your win and loss limits along with up to 100 autospins. The San Quentin slot offers a lot of action in both the base and bonus rounds that will surely keep you engaged and interested. What’s more, along with the bonus games two wilds form winning reel combos. The first one acts as a regular substitute, while the other splits the symbols above and below, doubling their number on the grid.

As we’ve announced in our intro, the San Quentin slot game is inspired by California’s oldest prison setup, dating from the 1800s. As soon as you start the game, you’ll find yourself on the outer side of the barbed fence where two surveillance cameras keep an eye of the reels. The graphics and overall theme feel very punk rock-ish and anarchistic, accompanied by Latin hip hop sounds. During the Free Spins game, the atmosphere goes inside the prison halls and reels spin along with the tight guitar riffs.

On the paytable, you won’t find the traditional royal symbols, but authentic elements and tools such as handcuffs, shivs, toilet rolls, lighters and a soap bar. The high-paying symbols are represented by a group of five prisoners including Crazy Joe, Beefy Dick, Loco Luis, Heinrich 3rd and Biker Bill. Beefy Dick pays the highest out of all, winning you 5x your bet for 5 of a kind. The Prison Tower is the scatter symbol that activates the Lockdown Free Spins Feature. There are two Wild features in the base game that heat the atmosphere. The regular wild can replace all symbols on the grid to form a win, while the Split Wild splits the pay symbols, doubling their presence on the grid.

The theoretical Return to Player (RTP) percentage of the San Quentin slot is 96.03% which is the industry average. Also, the game’s variance is extremely high, rated with 10/10 from the developer. This means that wins will come around less often, but they’ll surely be big once they occur. The hit frequency is over 30%, but tests show that straight line wins are not that frequent. This means that the engine of San Quentin slot relies on the bonus games. Speaking of wins, the maximum payout in this slot game is capped at 150,000x your bet per spin, which means that your prison break will be worth millions if you play with the maximum stake. However, if you’re not comfortable playing on highly volatile slots, make sure you set your bets correctly and gamble responsibly. Here you can read more about the Variance, Volatility and RTP in online slots and see which one suits you best.

This is where things get really interesting – the bonus rounds. Before you proceed, the gameplay will take you to the San Quentin prison’s dark underground where prisoners’ silhouettes will be cheering on every spin. You’ll notice that the top and bottom positions are locked. What’s their role here? Let’s find out now.

As we said, the top and bottom cells on the reels are locked. If you land 1 or 2 bonus symbols in a spin, you’ll trigger the Enhancer Cells feature,  and these cells are unlocked. When they open, they reveal one crew member, Wild, Razor Split symbol or xWays symbol. The Razor Split symbol will double all symbols on regular positions. If you’re lucky to get this symbol at the top and bottom of the same reel, it will split the symbols twice. On the other hand, the xWays symbol will reveal the same pay symbol, that is stacked four high.

This feature is triggered when you land 3,4 or 5 prison tower scatter symbols. This will win you 1, 2 or 3 Jumping Wilds accordingly. Enhancer Cells are open during this feature and will be active during your free spins session. Before you start, the gameplay determines a random number of free spins and a special convict symbol with a multiplier attached to it.

What makes the Free Spins game so different is the jumping wild represented by a silver police badge. This badge can jump to a random position during a free spin. If this wild lands on a reel with an active Razor Split enhancer, the multiplier is doubled, going all the way up to 512x your bet.

You’ll receive the same quality design of the San Quentin slot when you play it from a mobile device. The game is built with HTML5 which ensures that you’ll receive cutting-edge gaming experience. You can easily access the game on any Android, iOS and Windows device where it will perfectly adjust to your screen.

This creative team of developers marked a fantastic fruitful period, where their slot games were continually trending and in the spotlight. The Ancient Egyptian-themed slot called Tomb of Akhenaten focuses on the famous Egyptian dynasty where you’ll play with Pyramid Wilds and Sticky Win Spins. Their dark and thrilling title that walks though tombs and graveyards called Warrior Graveyard go deeper underground, where we reveal the warriors’ remains and their worth of up to 9797x your bet. Finally, if you prefer a lighter, adventurous atmosphere check out Monkey’s Gold, a slot game that will amaze you with its vibrant and colourful design that can bring you more than 12,000x your bet in a single spin.

The Sun Quentin slot met our expectations and moved the boundaries regarding the design and in-game mechanics. Even though the theme and subject are not conventional and a bit taboo when it comes to this industry, we had a blast during the testing process. Every detail in this slot is well put and incorporated with a reason. Some slot game critics and analysts already announce that this will be the slot game of the year, so it would be really exciting to see how this game will climb on the popularity scale.

Explore the San Quentin slot by claiming a welcome offer right from this page and play at top-rated online casinos.