Tomb of Akhenaten is another online slot that has an Ancient Egyptian theme. However, what’s different in this game is that it focuses on a ruler we haven’t seen in online slots before - the pharaoh called Akhenaten. Brought to you by Nolimit City, Tomb of Akhenaten takes you on a search of hidden treasures across five reels with Sticky Win Spins and Pyramid Wilds. In addition, the game has the Akhenaten Free Spins round with progressive multipliers that can give you winnings of up to 26,261x your bet. Interested to learn more about this game? Read our in-depth Tomb of Akhenaten Slot Review below. 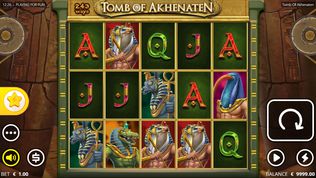 If you’re looking for a high variance game that can bring you massive wins, then this one is the right choice for you. Tomb of Akhenaten is an Ancient Egyptian-themed slot from Nolimit City that focuses on Akhenaten, the tenth ruler of the Eighteenth Dynasty. When we say that this game can give you massive wins, we mean that it can produce winnings of up to 26,261x your stake. Impressive, right? Wait till you hear that the game has 243 active paylines that can expand up to 3,125, and it also has a couple of bonus features to make the gameplay more interesting. We had a very good time testing this game and writing our Tomb of Akhenaten Slot Review, so let’s see if you’re going to like it as we do.

About Tomb of Akhenaten Slot

We’ve seen many Egyptian-themed slots being released this year. As it seems, players enjoy this type of online slots and developers are doing their best to produce some innovative and unique games. The latest release that comes from Nolimit City is an Ancient Egyptian-themed slot called Tomb of Akhenaten. As its title suggests, the game is based on a pharaoh called Akhenaten who is not very popular as the others. Still, here we have a well-designed game with huge potential to become a success among the players.

This is a five-reel slot that comes with 243 paylines. The reel action at Tomb of Akhenaten starts by placing your bet for every spin you make. Therefore, this game allows you to place bets that range between £0.10 and £100 per spin, which means that you have more than enough options to adjust your preferred bet according to your budget. To create a win, you have to land three or more matching symbols on an active payline. Any win you land triggers the Sticky Win Spins feature that will increase the number of paylines, up to 3,125, but we’ll talk more about this below.

Nolimit City has packed the Tomb of Akhenaten slot with many features, including Pyramid Wilds and Akhenaten Spins. Here, you can expect wilds, scatters, and multipliers, all working in favour for you to land big wins. Speaking of wins, we should mention that this game can deliver massive winnings that can go up to 26,261x your stake. What more can you want?

As we’ve mentioned above, the Tomb of Akhenaten slot has an Ancient Egyptian theme. The reel set is placed on a background that shows the entrance to an ancient tomb, so you will notice a couple of pillars and ropes while playing. Every time you trigger the Sticky Win Respin feature, the ancient tomb will be set in motion. All in all, it’s a nicely designed slot with quality visuals and graphics, filled with brown, gold and green colours. In addition, there is an Egyptian soundtrack playing in the background, adding more Ancient Egyptian vibes to the whole gameplay.

The paytable starts with the low-paying symbols 10, J, Q, K, and A, awarding up to 1.2x your bet for five of a kind. Next, there are five symbols designed as Egyptian god and goddesses - Bastet, Thoth, Sebek, Anubis, and Ra. If you land three to five of these on a payline, you’ll win up to 5x your stake. Besides these regular symbols, the Tomb of Akhenaten slot has two wilds and a scatter symbol. The explorer lady is the standard wild while the Pyramid wild is part of certain bonus features. On the other hand, there is the Pharaoh Akhenaten symbol, acting as the scatter, used for triggering the Free Spins feature.

RTP, Variance and Payouts for Tomb of Akhenaten Slot

The theoretical Return to Player (RTP) percentage of the Tomb of Akhenaten slot is 96.09%, which is about average. On the other hand, the game’s variance is set to high, which means that there won’t be very frequent payouts. However, once you win, you’ll win a bigger prize. The hit rate of the Tomb of Akhenaten slot is 26.22% which means that you’ll win about a quarter of the time you play. All in all, it’s an excellent online slot with the potential to deliver huge winnings. Here, winnings can go up to 26,261x your total stake per spin. Here you can read more about the Variance, Volatility and RTP in online slots.

Gameplay and Features on Tomb of Akhenaten Slot

Here we are, at the part of our Tomb of Akhenaten Slot Review that our players want the most - the bonus features. As we’ve mentioned above in our review, this game offers three different bonus features that can give you huge wins. Of course, first are the wild symbols, acting as substitutes for all regular players. But, one of them has a bigger role and is part of the Pyramid WIlds feature that expands the reels. Besides it, there is the Sticky Wins feature, as well as the Akhenaten Spins feature. So, let’s start explaining all three main features in more detail.

Every time you land a winning combination on the reels, the Sticky Win Spins feature is triggered. You’ll receive a respin with 1 additional row added to the game grid. At the same time, the number of active paylines (ways to win) will increase. And if you manage to expand the reels to their full potential, you’ll be playing with 3,125 active ways to win.

The Pyramid Wilds feature will be triggered when the reels expand to their maximum size. Then, you’ll see a red pointer spinning around the pyramids at the top of each reel. If the pointer lands on top of the Pyramid, it turns the whole reel into wild. If there’s already a wild symbol, it turns into a double wild and counts as two symbols.

Tomb of Akhenaten Slot on Mobile

If you enjoy playing online slots on your mobile or tablet device, you’ll be glad to hear that Tomb of Akhenaten is optimised to work on any mobile. The game is built with HTML5 so it will perfectly load and adjust to your screen size. No matter if you’re playing this game on a bigger or a smaller screen, you will receive the best gaming experience every single time.

Nolimit City might not be so popular like some other names in the online slots world, but it managed to produce a number of online slots that became favourite among the players. For example, Nolimit City has developed the Punk Rocker slot, a game that has up to 46,656 ways to win and a reel-set that expands to 6x6. Also, the developer has made the Buffalo Hunter slot, a well-designed game that offers payouts of up to 12,647x your bet. Or, if you want to play a more innovative game, make sure to check the Monkey Gold slot that features the xPays mechanic.

As a conclusion of our Tomb of Akhenaten Slot Review, we would say that we were impressed by this game’s potential. Nolimit City has packed this game with many interesting bonus features, great specifications, and huge payout potential. So if you’re one of those players who want to take risks and play high variance games, we recommend you to try the Tomb of Akhenaten slot. Here, you can place many different bets and spin for the chance to win prizes of up to 26,261x your total stake. Good luck!

Discover the Tomb of Akhenaten slot by claiming a welcome offer right from this page and play at top-rated online casinos.

Dr Wild and the Tomb of Dead Power 4 Slots

Tomb Raider Secret Of The Sword